On November 30/December 13 the entire Orthodox world commemorates the disciple of the Savior who first came to Christ, the first to respond to His call, for which he received the moniker “First-Called”—the holy apostle Andrew. 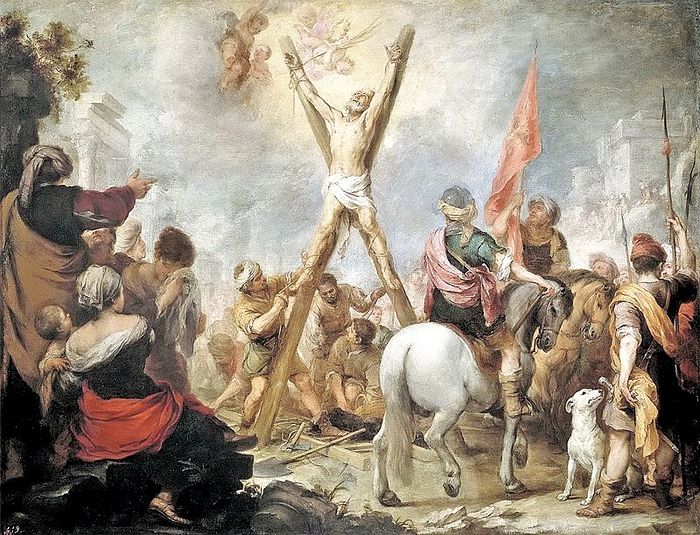 The epistles of the holy apostles in general, and of the preeminent apostle Paul in particular, are for us Sacred Scripture, constituting the canon of the New Testament books. They are also a reflection of the life of the hearts of their authors, of their psychological verbal portrait. The main quality, it seems to me, uniting all the apostles, was this incredible zeal with which they preached the Gospel to every creature, bore the word of God, and baptized and ordained, and confirmed the Churches. The geography of their travels amazes equally with their martyric podvigs, the endurance of deprivations, and their inner readiness to endure them. Therefore, they are undoubtedly apostles in the truest and fullest sense of the word “apostle” (meaning “messenger”).

Of course, the blessed gifts of the Holy Spirit greatly helped them and moved them, generously poured out upon them and the Most Holy Theotokos on the day of Pentecost. You cannot but admire the personal courage with which the holy apostles preached the word of God. Incidentally, the name of Andrew is translated from Greek precisely as “courageous.”

Courage, based on the ardent desire to live in Christ—this is what, I think, we should learn from the holy first-called apostle and from the other disciples of Christ. For them the Savior did not die, but lived with them and in them forever, always. It seems to me they hardly felt the ghostly face of death, and almost distinctly felt our Lord Jesus Christ, Who taught them and led them, as before on the emerald plains of Galilee and the gentle waves of the Sea of Tiberias, warmed by the southern sun.

He was for them alive. Truly, Yahweh is real!

I would like to quote some verses from the Epistle to the Philippians of the holy apostle Paul, which, probably can be called a motto for the apostles, showing us the inner dispensation of their holy souls: For to me to live is Christ, and to die is gain. But if I live in the flesh, this is the fruit of my labour: yet what I shall choose I wot not. For I am in a strait betwixt two, having a desire to depart, and to be with Christ; which is far better: Nevertheless to abide in the flesh is more needful for you (Phil. 1:21-24).

Remember the death by crucifixion of the holy apostle Andrew the First-Called in the Greek city of Patras, which speaks at the same time of his deep humility (the holy apostle Andrew asked the governor Aegeas to crucify him on a diagonal cross—the apostle did not want to resemble the Savior—just as his great brother Peter, asking, for the same reason, to be crucified upside down) and of his fervent, passionate desire to die—to die so as to unite with his beloved God.

When the people threatened the ruler of the city, the pagan Aegeas, with a revolt if he did not free the apostle, St. Andrew began to pray to God to allow Him to die, to receive his death on the cross for Christ, and to be united with Him. And his sincere prayer was heard. When the people, loving the holy apostle with filial love, arrived to save their teacher from death, a shining cloud enveloped the cross, and no one was able to draw near to the cross until the blessed repose of Christ’s first disciple. St. Andrew pronounced, “Lord, Jesus Christ, receive my soul.” And he died in order to live eternally united with his beloved God.

For the Eastern Slavs, the holy apostle Andrew the First-Called is very likely our kin. For, St. Nestor the Chronicler narrates in his composition The Tale of Past Years or The Primary Chronicle: “When St. Andrew was teaching in Sinope and arrived in Korsun (Chersonese), he learned that not far from Korsun is the mouth of the Dnieper; he wanted to go to Rome, and sailed to the mouth of the Dnieper, and from there headed up the Dnieper. And it so happened that he came and stood under the mountains on the shore. In the morning he arose and said to the disciples who were with him, ‘Do you see these mountains? The grace of God will shine upon these mountains; there will be a great city, and God will raise up many churches.’ And ascending these mountains, he blessed them and placed a cross and prayed to God, and descended from the mountain, where subsequently would be Kiev, and he went up the Dnieper, and he came to the Slavs, where Novgorod now stands…”

Of course, today there exist many historical theories according to which St. Andrew went only to the Greek colonies of the Northern Black Sea, and then to Rome.

But all the same, I want to believe our venerable Nestor the Chronicler about the holy apostle ascending the Kievan hills and blessing the cross and our land by his apostolic blessing. What’s more, it was completely in apostolic character: fearlessly going to the semi-savage pagan tribes to fulfill the mission entrusted to him by the Teacher: to enlighten the entire world with the light of faith in Christ. Could a man who so fervently, so sincerely loved his God fear the northern forests and the people living there?! It seems to me he could not. He could not choose the easy path to Rome, for his main task was not a comfortable tourist trip—no, he travelled to preach the Gospel to the greatest possible number of people!

Moreover, in my view, the special care of the holy apostle Andrew the First-Called is felt in that he founded the Church in the village of Byzantium. From it would later develop the Church of Constantinople, which became the Mother for the Russian Church.

What lesson, dear brothers and sisters, can we draw from the life of the holy apostle Andrew the First-Called?

I think that, just like him, we should not only declare our faith, but heartily feel with us the presence of the living God, Who is one and the same—eternally-living, eternally-existing—for the apostles and for us. May the fiery, burning desire for union with God move every one of us! In this, perhaps, is the meaning of life for an Orthodox Christian: to stop, to listen to yourself, and to see with the eyes of your heart that Christ is with you, very near. Apostle Andrew, the Holy and All-Praised First-Called
Commemorated on November 30/December 13
The Holy Apostle Andrew the First-Called was the first of the Apostles to follow Christ, and he later brought his own brother, the holy Apostle Peter, to Christ. Unremitting zeal for the preservation of the grace of the Holy Spirit. Instruction on November 30, the feast of the Apostle Andrew the First-Called
Bishop Vissarion (Nechaev)

Unremitting zeal for the preservation of the grace of the Holy Spirit. Instruction on November 30, the feast of the Apostle Andrew the First-Called
Bishop Vissarion (Nechaev)
Today we celebrate the memory of the Holy Apostle Andrew the First-Called. This Apostle means very much to the Russian Church. There is tradition that says that during the course of his apostolic journeys, he reached the hills of Kiev and erected a cross there, blessed the people, and pronounced a prophecy: “On these hills will shine forth the grace of God, and a great city will be created here, and the Lord will raise up many churches in it.” The Astonishing Missionary Journeys of the Apostle Andrew
Part 3
Nun Nectaria (McLees)
Also, he had a sense of humor. For example, some of the sources say that when he first saw the saunas of the Slavs in what is now Novgorod he wrote letters to friends saying, “These Slavs are such strange people; they torture themselves with birch branches.” He was laughing about it. You cannot imagine him as a master of strictness. He was a humorous man, very humble, very easy. As a Mediterranean person he was surprised by these strange traditions. Of course, he was also a man who had seen many things.

The Astonishing Missionary Journeys of the Apostle Andrew
Part 1
Nun Nectaria (McLees), George Alexandrou
The most important thing is that these puzzle pieces – the separate local traditions of Bulgaria, Romania, Ethiopia, of the Aramaic people, the Syrians, the Copts, even the Greek and Roman church traditions all fit together, but you have to follow them step by step to recreate his life. Finally, I had only one piece that I couldn’t fit, even as a possibility: the Declaration of Arbroath, the fourteenth-century Scottish declaration of independence from England which says that the Scots were taught the Christian faith by St. Andrew himself. Historians dismiss this, but I have to point out that his presence there was not physically impossible.
×