Ritsoudis stated that he acted as his conscience demanded, because “the law of God is above all else.” 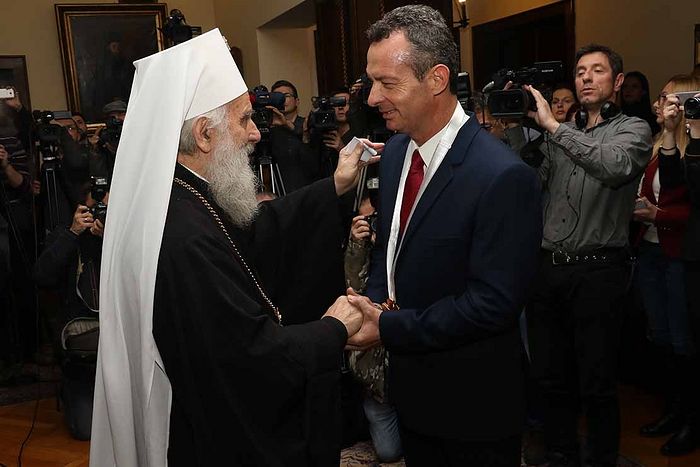 Photo: The site of the Serbian Orthodox Church

The ceremony was held in Belgrade on Tuesday.

“After serving his sentence, and after all the temptations, he had the courage to say, ‘I’m not a hero. The hero is the Serbian people! This is truly the rule for a courageous, wise, and true Christian. We don’t have enough words to thank him for this act, so we have decided to acknowledge him with the Order of Emperor St. Constantine,” His Holiness Patriarch Irinej of Serbia explained at the ceremony.

Second Naval Lieutenant Marinos Ritsoudis refused to board Themistocles destroyer ship in April 1999, not long before its departure to join in the attack on Serbia. The officer had met with the then-Archbishop Christodoulos and Fr. George Metallinos who then went to support him in Naval Court on April 21, 1999. Fr. George said that he had advised Ritsudis to act according to his conscience.

After the meeting, Ritsoudis notified his commander and the commander of the ship and also the prosecutor of the Naval Court that he was refusing to obey the order.

The court sentenced him to 2.5 years, with a three year delay. Those gathered outside the court house welcomed Ritsoudis with shouts of “Bravo.” There were many anti-war speeches and rallies in Greece at that time against the bombing of Orthodox Serbia.

The Navy fired Ritsoudis, who then appealed to the European Court to no avail. He stated that he acted as his conscience demanded, because “the law of God is above all else.”

The bombing of the Federal Republic of Yugoslavia (consisting of Serbia and Montenegro) by NATO forces lasted for 78 days from March to June 1999. The West had accused the Belgrade authorities under Slobodan Milosevic of ethnic cleansing against Kosovo Albanians and of having Serbian troops in Kosovo.

There is no precise data on the victims of the bombing available. According to Serbian estimates, between 1,200 and 1,250 people died, and between 5,000 and 12,500 were injured.

The Order of Emperor St. Constantine of the Serbian Orthodox Church is awarded to both ecclesial and secular people for significant contributions to the freedom of religion and the development of human rights and freedom in general. Serbia commemorates 17 years since NATO bombing; Vucic: We will not forget
“Serbia needs children and schools and every form of communication. We will not forget, and we will not let anyone conquer us. Serbia will continue to be a country of defiant and undefeated people."

Mary1/28/2018 9:49 pm
3805The Greek Doctors Without Borders, who were transporting and caring for wounded, putting their lives in harms-way have been overlooked for their bravery. Although schools, hospitals and such were supposed to be spare NATO's rath, that was not the case. The Greek Doctors Without Borders carried the Greek Flag with the medical cross and they were fired upon by NATO. Certainly, Marinos Ritsoundis mad a decision which should not be overlooked but these brave doctors were in the line of fire.

Steve cox1/28/2018 2:09 pm
I agree with Paok. I believe that God will reward you. The choice you made was difficult, but was the right and good choice. I am an American convert to Orthodoxy. I am ashamed of many things the American government has a part in. Your faith encourages is all. Steve

I must shamefully say that I knew nothing of you prior to this article, but I who am not Serbian want to commend you for your truly Orthodox Christian mindset. I wish and pray that all the Greeks had such a truly Christian and Orthodox mind; the mind of the Church instead of the mind of the world!