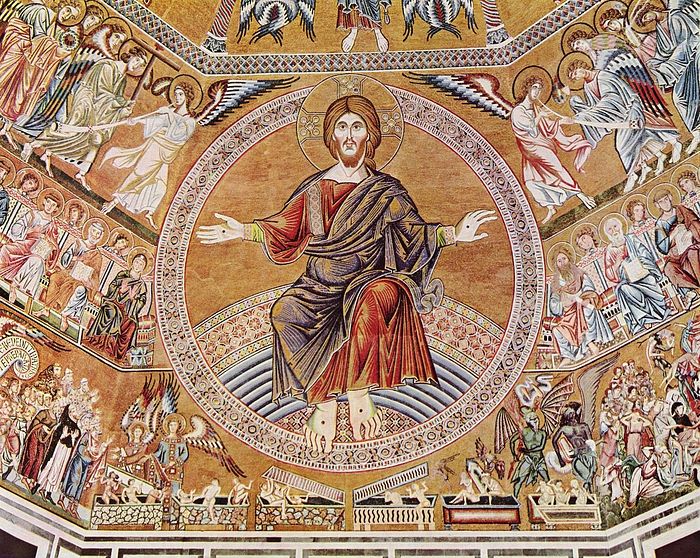 Christ the Pantocrator and the Last Judgment, 1300. Mosaic in the baptistry of San Giovanni, Florence, Itary. Photo: Wikimedia Commons

Chapter 6: What is the First Resurrection, and What the Second.

Chapter 7: What is Written in the Revelation of John Regarding the Two Resurrections, and the Thousand Years, and What May Reasonably Be Held on These Points. 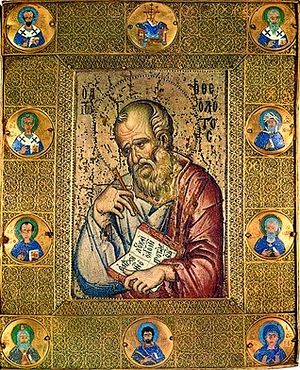 St. John the Theologian. Photo: www.pravenc.ru
The evangelist John has spoken of these two resurrections in the book which is called the Apocalypse, but in such a way that some Christians do not understand the first of the two, and so construe the passage into ridiculous fancies. For the Apostle John says in the foresaid book, And I saw an angel come down from heaven. . . . Blessed and holy is he that has part in the first resurrection: on such the second death has no power; but they shall be priests of God and of Christ, and shall reign with Him a thousand years. Those who, on the strength of this passage, have suspected that the first resurrection is future and bodily, have been moved, among other things, specially by the number of a thousand years, as if it were a fit thing that the saints should thus enjoy a kind of Sabbath-rest during that period, a holy leisure after the labors of the six thousand years since man was created, and was on account of his great sin dismissed from the blessedness of paradise into the woes of this mortal life, so that thus, as it is written, One day is with the Lord as a thousand years, and a thousand years as one day (2 Peter 3:8), there should follow on the completion of six thousand years, as of six days, a kind of seventh-day Sabbath in the succeeding thousand years; and that it is for this purpose the saints rise, viz., to celebrate this Sabbath. And this opinion would not be objectionable, if it were believed that the joys of the saints in that Sabbath shall be spiritual, and consequent on the presence of God; for I myself, too, once held this opinion. But, as they assert that those who then rise again shall enjoy the leisure of immoderate carnal banquets, furnished with an amount of meat and drink such as not only to shock the feeling of the temperate, but even to surpass the measure of credulity itself, such assertions can be believed only by the carnal. They who do believe them are called by the spiritual Chiliasts, which we may literally reproduce by the name Millenarians. It were a tedious process to refute these opinions point by point: we prefer proceeding to show how that passage of Scripture should be understood.

The Lord Jesus Christ Himself says, No man can enter into a strong man's house, and spoil his goods, except he first bind the strong man—meaning by the strong man the devil, because he had power to take captive the human race; and meaning by his goods which he was to take, those who had been held by the devil in various sins and iniquities, but were to become believers in Himself. It was then for the binding of this strong one that the apostle saw in the Apocalypse an angel coming down from heaven, having the key of the abyss, and a chain in his hand. And he laid hold, he says, on the dragon, that old serpent, which is called the devil and Satan, and bound him a thousand years—that is, bridled and restrained his power so that he could not seduce and gain possession of those who were to be freed. Now the thousand years may be understood in two ways, so far as occurs to me: either because these things happen in the sixth thousand of years or sixth millennium (the latter part of which is now passing), as if during the sixth day, which is to be followed by a Sabbath which has no evening, the endless rest of the saints, so that, speaking of a part under the name of the whole, he calls the last part of the millennium—the part, that is, which had yet to expire before the end of the world—a thousand years; or he used the thousand years as an equivalent for the whole duration of this world, employing the number of perfection to mark the fullness of time. For a thousand is the cube of ten. For ten times ten makes a hundred, that is; the square on a plane superficies. But to give this superficies height, and make it a cube, the hundred is again multiplied by ten, which gives a thousand. Besides, if a hundred is sometimes used for totality, as when the Lord said by way of promise to him that left all and followed Him He shall receive in this world an hundredfold (Matthew 19:29); of which the apostle gives, as it were, an explanation when he says, As having nothing, yet possessing all things (2 Corinthians 6:10)—for even of old it had been said, The whole world is the wealth of a believer, with how much greater reason is a thousand put for totality since it is the cube, while the other is only the square? And for the same reason we cannot better interpret the words of the psalm, He has been mindful of His covenant for ever, the word which He commanded to a thousand generations, than by understanding it to mean to all generations.

And he cast him into the abyss—i.e., cast the devil into the abyss. By the abyss is meant the countless multitude of the wicked whose hearts are unfathomably deep in malignity against the Church of God; not that the devil was not there before, but he is said to be cast in there, because, when prevented from harming believers, he takes more complete possession of the ungodly. For that man is more abundantly possessed by the devil who is not only alienated from God, but also gratuitously hates those who serve God. And shut him up, and set a seal upon him, that he should deceive the nations no more till the thousand years should be fulfilled. Shut him up—i.e., prohibited him from going out, from doing what was forbidden. And the addition of set a seal upon him seems to me to mean that it was designed to keep it a secret who belonged to the devil's party and who did not. For in this world this is a secret, for we cannot tell whether even the man who seems to stand shall fall, or whether he who seems to lie shall rise again. But by the chain and prison-house of this interdict the devil is prohibited and restrained from seducing those nations which belong to Christ, but which he formerly seduced or held in subjection. For before the foundation of the world God chose to rescue these from the power of darkness, and to translate them into the kingdom of the Son of His love, as the apostle says (Colossians 1:13). For what Christian is not aware that he seduces nations even now, and draws them with himself to eternal punishment, but not those predestined to eternal life? And let no one be dismayed by the circumstance that the devil often seduces even those who have been regenerated in Christ, and begun to walk in God's way. For the Lord knows them that are His (2 Timothy 2:19), and of these the devil seduces none to eternal damnation. For it is as God, from whom nothing is hid even of things future, that the Lord knows them; not as a man, who sees a man at the present time (if he can be said to see one whose heart he does not see), but does not see even himself so far as to be able to know what kind of person he is to be. The devil, then, is bound and shut up in the abyss that he may not seduce the nations from which the Church is gathered, and which he formerly seduced before the Church existed. For it is not said that he should not seduce any man, but that he should not seduce the nations—meaning, no doubt, those among which the Church exists—till the thousand years should be fulfilled; i.e., either what remains of the sixth day which consists of a thousand years, or all the years which are to elapse till the end of the world.

From: The Nicene and Post Nicene Fathers, by Phillip Schaff. For the complete text, see Christian Classics Ethereal Library. The Last Judgment is Within Us
Sergei Komarov The Last Judgment: Destruction and Redemption at the End of History
Hieromonk Herman (Majkrzak)

The Last Judgment: Destruction and Redemption at the End of History
Hieromonk Herman (Majkrzak)
The Lord came to save and to restore, to transfigure and illumine; but inevitably this involves death and judgment and destruction. He Himself submitted to death at the hands of false judges, so that death might become the path to incorruptible life. The resurrection, both of man and of the entire created cosmos, will only occur after death. The “new heaven and the new earth” will be consummated only after “the former things have passed away.” History had a beginning, and it will have an end. And that end is destruction, and that destruction will give way to boundless, unimaginable glory and beauty. Of the Last Judgment
St. Augustine
For that day is properly called the Day of Judgment, because in it there shall be no room left for the ignorant questioning why this wicked person is happy and that righteous man unhappy. In that day true and full happiness shall be the lot of none but the good, while deserved and supreme misery shall be the portion of the wicked, and of them only.
Comments

Anthony 2/11/2018 9:39 pm
And once the Russkies had committed regicide, the one who restrains was taken out the way. And the devil was set loose. And now follows. Nation rising against nation. And kingdom against kingdom. And earthquakes, and terrors, and famines and diseases in various places. Yes indeed. What horrors we live through and what horrors still await us in this hellish existence we call life.
×