How can we make the image of Christ out of a “shapeless stone”? 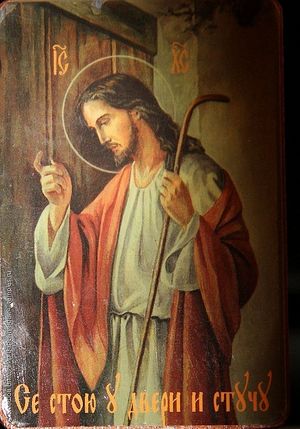 Once Bishop Pitirim (Tvorogov), of Dushanbe, my fellow student at the theological seminary, told me a story that took place in one of the hospitals in Tajikistan in the 1990-s. A young man was taken to the hospital in critical condition. “The deputy medical director refused to examine the patient unless his relatives would come (and pay him under the table). They called the medical practitioner several times, but he stubbornly insisted that he would not treat the patient unless his relatives came to him. Finally, the young man died, and his relatives went to him for a death certificate. After the medical director condescended to see the patient, he was terrified to learn that the man was his own son...”1

Undoubtedly, what shocks us in this story is the cynical medical negligence and indifference. But today we will be speaking about something different. We will be speaking about the fact that the story may teach all of us a very important moral lesson. The lesson we can draw is that the principal reason for our troubles is our indifference to those in whom we failed to recognize our neighbor.

If you have never lost your child, it is difficult to imagine the pain that the doctor felt when he knew that dead man was his son. Moreover, there was something that made the unbearable suffering even more intense: What killed the son was his father’s unintentional disregard [for him]. What caused that pain in the father? I believe that was the anguish of his love, which, because of its inferiority and mediocrity, had failed to see his son in the suffering boy and save his life—the love that lost the opportunity to help the beloved one who was in trouble, and therefore, got into trouble itself. I believe, that anguish is similar to the one the “goats” will suffer when Christ says to them at the Last Judgment, “I was hungry and you gave Me no food; I was thirsty and you gave Me no drink...” That will be the anguish of love or conscience that, when it lived its earthly life, failed to recognize dear and beloved Christ in those who were suffering. At that minute they will feel the pain that will always be with them in eternity...

Not only to see, but to love

The Parable of the Last Judgment told by the evangelist Matthew (Mt. 25:31-46) sets forth the problem of inferior spiritual sight Christians will be suffering from. It is obvious that we indeed have to face that problem. When we for the first time turned to the Gospel to learn that Christ lives in everyone who is needful of help, we did not hasten to devote all our time at Christ’s bed in the hospital, or give Christ the excess clothing stored in our wardrobes. It rarely dawns on us to care about prisoners. As to strangers, we are a little scared of them: Who knows what they might do! So it seems we are reluctant to see Christ in strangers. To be precise, we realize that the Lord turns to us through every stranger; and what is different to us is that we cannot love Christ in the image that in one way or another might seem repelling. We cannot see Christ in anyone; we can not see Christ Whom we love!

On the other hand, how difficult it is to achieve this love when the degree of evidence that Christ is near is not that clear—in situations when Christ comes to us not through revelation or Holy Communion, but at times through an unpleasant appearance or smell, through the need to make an effort or spend money on a stranger, through the imminence of being part of somebody’s problem that is so terrible that you want to run away from it as quickly as possible!

Christ’s love for humankind is a sacrifice, and we have to make sacrifices for our love for Christ

However, on our “human scale”, we usually have a period of infatuation, a period when true love is growing, a period of lofty platonic love, and then of hard work when we strive to build a stable relationship! All periods are important for us and our family happiness, and it is clear to everyone! But we should think about our relationship with Christ in in the same way! Yes, it is rather difficult to make ourselves love Christ in a repulsive image.

It must be similar to our attempt to make a sculpture, an image of Christ out of a shapeless stone. But this labor is essential—Christ’s love for humankind is a sacrifice, and we have to make sacrifices for our love for Christ.

It may seem that what confuses us is the misleading appearance of the needy that makes it difficult to recognize Christ in them. There is a well-know parable about it. A woman was leaving the church after the Sunday Liturgy and gave money to a holy fool-for-Christ. The holy fool told her that the Lord would come to her that day. Maria (that was that woman’s name) began getting ready for her meeting with Christ. She cooked festival dishes, and thoroughly cleaned the floors and the windows. She was waiting for Christ and peered out of the window to see Him. The first hour of waiting elapsed peacefully, but then someone started banging on the door. She opened the door to see a boy running from hostile little bandits, asking her to give him refuge. Maria, in her turn, was disgusted to see dirty boots that might smudge the polished and glistening floor—and so she kicked him out.

A bit later a disabled alcoholic knocked at the door; he had spent all his money on drinking and he was very hungry. When he asked her just to give him something to eat, our Maria said firmly, “Get out of here! Next time you want to buy alcohol, buy something to eat instead.”

It was already getting dark, but Christ still hadn’t come to Maria. Confused, she was about to go to bed when she looked out of the window and saw a woman, her neighbor, sitting on the bench with a little child in her hands. The woman’s husband had beaten her once again and put her out on the street despite the approaching storm. But even this did not evoke any compassion in Maria’s heart—she criticized the poor woman and insisted that she go home: “If you don’t care about yourself, at least take care of your child.”

Night followed the evening. Maria lost hope of meeting with Christ and was going to bed, when she suddenly noticed that the icon of the Savior was beaming with radiance. She understood that Christ had finally come. She turned to Him, saying, “Lord, I waited for You the whole day, but You did not come. Why?” “I came to you three times, said the Lord. And every time you rejected Me.”

Indeed, the “clothes” Christ wears in our world is rather similar to filthy rags that do not let our nearsightedness see Christ. That is why we often hear such words as, “That man is hopeless. What Christ are you talking about? He is reaping what he has sown.” Or something like this: “This tramp is a “professional” beggar. Do you really think Christ would talk to him?” In fact, that is the reason for our spiritual nearsightedness; following this logic, we only try to calm down our conscience by the well-known maxim: “Ah, it’s so easy to deceive me!...This time, I’m glad to be deceived!”2 The latter seems to be an even more obvious reason: We may find a lot of examples in the lives of righteousness Christians that prove that the right spiritual approach overcomes such self-deception. Many know of this good example: We may recall what newly reposed George Velikanov recently did when he laid down his life for his neighbor.3

We should overcome both inferior love and our spiritual laziness

So what is it that prevents us from having self-sacrificing, true love for the image of Christ in our neighbor? I do not think it is difficult to understand. In order to stop paying attention to the “rags” and start understanding what to do further, it will be enough to imagine that our mother or father, our spouse or children wear the rags that seem so repelling. Neither dirty clothes or an unpleasant smell, nor unflattering appearance are important when we speak about the one we love. The problem is inferior love, which did not let the doctor recognize his beloved son and does not let us see our beloved Christ hidden in the “rags”. The problem has its roots in our spiritual laziness, for it is not easy to make an image of Christ out of a “shapeless rock”.

The cartoon from Soviet times called, The Scarlet Flower,4 was truly wonderful! It is wonderful for its Christian intuition: The way Nastenka treated the beast on the island reflects the right relationship a Christian has to have with Christ in the earthly perspective. Following the example of that beautiful girl who showed compassion for the beast, the Christian should have compassion for any stranger whatever his appearance; perhaps it is not for their kind heart but for the image of Christ—which we all are. Following the example of Nastenka, who had to endure many troubles and the labor of self-sacrifice for the sake of the Beast and her love for the scarlet flower, we should be patient and work hard to prove our faithfulness to Christ and preserve our love. Finally, following the example of Nastenka who received her award when the Beast turned into a handsome prince, only true Christians are worthy of hearing from Christ, “Come, you blessed of My Father, inherit the kingdom prepared for you from the foundation of the world.”

2 An exerpt from Confession, a poem by Alexander Pushkin.

3 George saved at the cost of his own life a homeless man from death under the wheels of a suburban train.

4 A tale similar to “Beauty and the Beast”. He Has Given Us the Questions to the Final Exam
Fr. James Guirguis

He Has Given Us the Questions to the Final Exam
Fr. James Guirguis
Why do these things matter to the Lord Jesus? Why are they required of us? A Sermon Before Confession on the Sunday of the Last Judgment
Archpriest Valerian Krechetov
They asked her, “What did you see? What was revealed to you?” She only answered, “Don’t judge anyone. We are going to be judged very severely. Don’t judge anyone.” Judge not that ye be not judged (Mt. 7:1)—this was written in the Gospels. We should try to fulfill this commandment.
Comments
×