"Missionary Work is Always Dangerous Here." An interview with Bishop Savva of Burundi and Rwanda

Rwanda, Burundi, and Eastern Congo [The Democratic Republic of the Congo] are some of the most troubled regions on the African continent. Military conflicts and civil wars have gone on continually since the 1990's. Sickness, epidemics, and hunger are widespread.

Under such conditions, the ancient Alexandria Patriarchate carries on its service in the person of one of its relatively young hierarchs—Bishop Savva (Heimonettos). Born in Rhodes, Greece, he graduated from Patmos Seminary, and later from the Department of Social Theology of the Athens Theological Faculty. He was tonsured a monk and ordained into the priesthood in the early 1990s, and served in various parishes of the Rhodes metropolia. At the invitation of the now reposed Patriarch Peter VII, Fr. Savva was received among the clergy of the Alexandria Patriarchate, appointed rector of the Patriarchal cathedral of St. Savva the Sanctified in Alexandria, and headed the Church publications and social relations department. In 2001 he was made the Patriarchal representative in Alexandria, and the Patriarchal steward. He was a member of the Synodal commission for education. On October 6, 2009, Fr. Savva was unanimously chosen by the Holy Synod of the Alexandria Patriarchate to become the bishop of the new diocese of Burundi and Rwanda.

Today we are talking with Bishop Savva about the particularities of life in his diocese, and Orthodox missionary work in this troubled area. 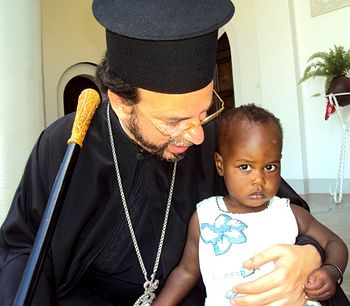 Bishop Savva: Africans seek the truth.
—Your Eminence, what can you say about the religious experience particular to Africans, their character and soul? Is there something that distinguishes them from Europeans, and in part, from Greeks?

—Africans seek the truth; they have spiritual needs that none of the other Churches can answer: they need the truth. Orthodoxy is still "new" to Africa, and therefore we must have condescension toward them.

In Greece and Europe, church bells have been ringing for two thousand years; but in Africa, they began to ring only a half century ago. The Africans hear them and want to learn, and we are trying to bring them the good news of salvation, regardless of adverse and difficult conditions.

—How would you assess the position of Orthodox missionary work in your diocese in Africa as a whole? How would you compare it with that of Catholics and Protestants, for example?

—Orthodox missions do not receive any help from any sources other than simple Orthodox people. They try in any way to relieve the sufferings of Africans, whom everyone has used and exploited, including representatives of other confessions—let us not forget about the role that they played in the genocide in Rwanda, and about certain Protestant Churches that imposed themselves upon the population. Missionaries from other confessions are supported by their own centers [in other countries], while we labor ourselves; moreover, we work without any gain for ourselves, all for the sake of the Africans, who are also God's creation. 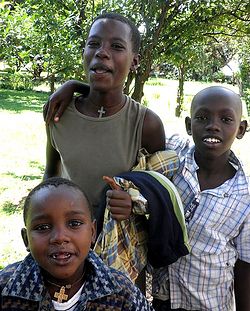 –How is the Orthodox Church's condition reflected in the laws of those countries included in your diocese?

—The governments relate positively toward the work of the Orthodox Church. They see how it differs. However, they remember the evil they have suffered from false Christians, and so they are cautious and attentive. The contributions made by the Orthodox Church to education, health care, agriculture, etc., on the entire African territory is unique.

—Relatively recently, Rwanda was the arena of a bloody civil war. Does missionary work in your diocese put the lives of the missionaries in danger?

—Missionary work in this area is always dangerous. We hope in God's grace and the protection of the Mother of God. I am often in hot spots of Eastern Congo; we experience all those events, and are consoled and thank God that we have endured these trials. We have Christians there, missionary centers and parishes, which must not be abandoned. Therefore, the contributions made by Orthodox missionary centers cannot be overestimated.

—In what language do you perform the Church services? Are there any plans for translating liturgical texts into the languages of local peoples and tribes?

—In each country, the regional language is used; in Burundi, the Rundi language, Greek, inasmuch as there are thirty Greeks living there, and French, which was introduced at the time of the first colonizers. French was used until the Church books were translated into local languages. Translations of the service books have been written in several other languages—for example, Swahili. 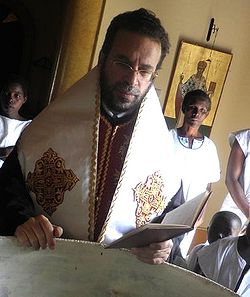 —What charitable work does your diocese do? Does it have its own hospitals and schools?

—In Burundi, the population has no opportunity to receive medical help and there is no existing health care system. In the more serious situations, the sick are taken to Kenya or South Africa, which makes them lose precious time; anyway, there are very few who could afford it. Because of the bad economic situation, the government is not able to provide for the training of medical staff, and illiteracy is very high. Therefore, everyone expects help from the missions, and we in turn try to do everything possible, with the help of Orthodox Christians. But the situation in East Congo is specific, and things are always changing there, because guerilla warfare is still going on. There are always many poor and suffering people in Eastern Congo.

The diocese conducts important missionary and social-humanitarian work, such as:

—Work of schools in the St. Basil missionary center in Uvira (Eastern Congo), where there are 450 elementary students, and 150 more in nursery schools;

—Opening schools in Buramata (Burundi), where 1600 people are studying.

—Distributing food products to refugees in the Gangar region of Burundi;

—Supporting single mothers widowed or abandoned by their husbands;

—Care for the poor;

—Providing medicine for the population, especially for malaria, typhoid fever, yellow fever, and cholera, as well as vaccinations against meningococcus;

—Daily distribution of meals to 250 people;

—Distribution of notebooks and other school supplies to elementary and other students;

And of course, we are working together with various Greek humanitarian organizations. 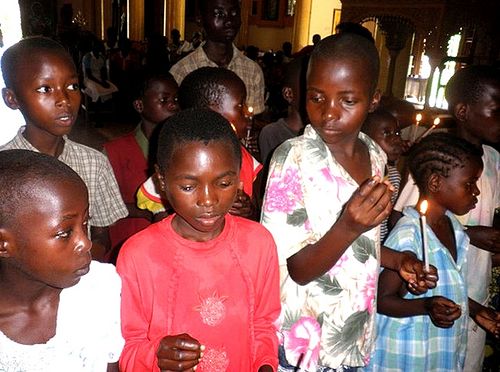 —How are you resolving the problem of educating new clergymen? How acute is this problem in your diocese, and where do you find young candidates?

—Unfortunately, our region is considered one of the most difficult, and therefore this problem is only resolved by attracting native Africans, who are sent to theological seminary in the Alexandrian Patriarchate in Alexandria, Kenya, and Kinshasa, and thus we have the possibility to provide our continually growing parishes with priests. This is a serious problem, because we also need Greek priests who could serve together with the African priests to give them experience, but the situation in the Great Lakes region—lack of safety, guerilla wars—does not facilitate the flow of volunteer clergymen who wish to serve here. 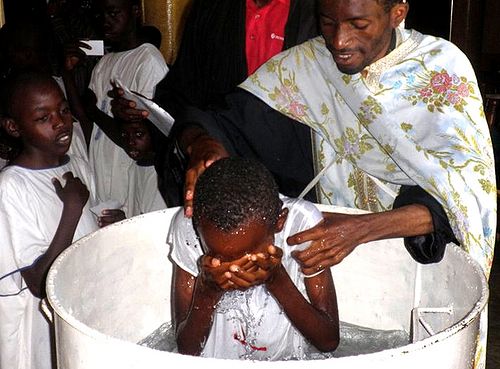 —Do you think that the serious political upheavals that have swept over a number of African countries, beginning with the Arabic states, might affect the position of the Alexandria Patriarchate as a whole?

—The Orthodox Church is loved all over the world; it does not get involved in politics, and political changes do not affect it. The Alexandria Patriarchate has lived for two thousand years without any problems. Egypt respects the Patriarchate, as do other Arabic states of Northern Africa. The missionary work conducted throughout the enormous African continent will continue to be controlled and regulated from the Alexandria Patriarchate.

—What would you like to say from far away Central Africa to our readers?

—First of all, I would like to thank you for giving me the opportunity to communicate with our beloved Russian Orthodox brothers [and sisters] through your site. Do not forget us in your prayers. With the prayers and blessings of His Beatitude Patriarch Theodore II, who lived for many years in Russia, I would like to greet everyone with the Paschal greeting: CHRIST IS RISEN!

Rashelle4/16/2013 11:20 am
Hi, my names Rashelle and I am really interested in doing missionary work. I am just starting to become a leader at church but I want to get the word out in the more dangerous places. I am happy to save money and pay for myself. Please let me know if there's anything I can do.
×