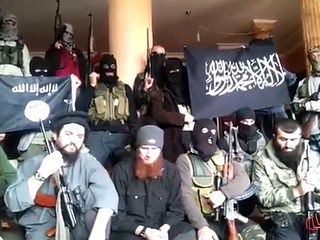 In the Chechen republic the first criminal case has been initiated regarding participation of a Russian citizen in outlawed armed bands on the territory of Syria, reports ITAR-TASS.

As was reported by the public prosecutor's office of the republic, investigators of the Federal Security Service's administration in Chechnya have filed a suit against a local resident, Shahid Temirbulatov (section 2 of the article 208 of the Criminal Code of the Russian Federation: "Participation in a paramilitary group on the territory of a foreign state, which is not provided for by the legislation of this state, with an aim contradictory to the Russian Federation's interests").

"The examination has established that in July 2013, the RF citizen, being on the territory of the Syrian Arab Republic, entered a paramilitary group, which was not stipulated by the state's legislation, and has been taking part in warfare against the government armed forces of Syria up to now, with a purpose contradictory to the Russian Federation's interests," stated in the public prosecutor's office.

The public prosecutor's office has recognized this decision as lawful and well-grounded and has taken the control of the course of investigation.

"Earlier, the republic's prosecutor many times noted the need to investigate and search out operations aimed at eliciting incidents of Russian citizens’ participation in the armed conflict against the Syrian government armed forces," stressed the republic public prosecutor's office.

Meanwhile, according to BaltInfo, reinforcements are being redeployed to Aleppo from Rakka and Deir-Ez-Zur. The objective is "to overwhelm dogs of the Awakening"—rebels fighting against the "Islamic state of Iraq and the Levant" group, which is connected with al Qaeda. The reinforcement columns are headed by Chechen militants, who have a reputation as select sub-units during fierce warfare against the Syrian army. This was reported by Interpolit.ru with reference to the Lebanese newspaper Al-Akhbar.

The beheaded Franciscan Friar, Fr. Francois Murad, was brutally murdered by militants from the North Caucasus. In the video of the murder on YouTube they can be heard speaking with each other in Russian. ‘Whole families murdered’: Syrian rebels execute over 80 civilians outside Damascus
Over 80 civilians in a town northwest of the Syrian capital of Damascus have been executed by Islamist rebels. Many others were kidnapped to be used as human shields. French brothers seek jihad in Syria
What makes a young middle-class man turn to Islam and want to risk "martyrdom" in Syria? A French father, who has just been bereaved, tells the BBC's Christian Fraser what happened to his sons.