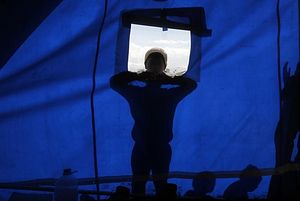 Kurdish refugee boy from Kobani tries to look into his new school at a refugee camp in the border town of Suruc, Turkey, on November 2, 2014. Reuters
Kurdish children from the Syrian city of Kobani (or Ain al-`Arab in Arabic) were tortured and abused while detained by Islamic State (also known as ISIS), Human Rights Watch said today. Four children gave detailed accounts of the suffering they endured while held for four months with about 100 other children.

The children, aged 14 to 16, were among 153 Kurdish boys whom ISIS abducted on May 29, 2014, as they traveled home to Kobani. According to Syrian Kurdish officials and media reports, ISIS released the last 25 of the children on October 29. Interviewed one by one in Turkey, where they had fled to safety after ISIS released them in late September, the four boys described enduring repeated beatings with a hose and electric cable, as well as being forced to watch videos of ISIS beheadings and attacks.

“Since the beginning of the Syrian uprising, children have suffered the horrors of detention and torture, first by the Assad government and now by ISIS,” said Fred Abrahams, special advisor for children’s rights at Human Rights Watch. “This evidence of torture and abuse of children by ISIS underlines why no one should support their criminal enterprise.”

ISIS initially stopped about 250 Kurdish students from Kobani as they traveled home after taking their middle school exams in Aleppo on May 29. ISIS released all the girls, around 100, within a few hours, but kept 153 boys at a school in Manbij, a town 55 kilometers southwest of Kobani.

About 50 of the boys escaped or were released between June and September, with about 15 of them apparently being exchanged for ISIS fighters held by the Kurdish armed group, the People’s Protection Units (YPG). In late September, ISIS released about 75 of the remaining boys, including those interviewed by Human Rights Watch. The four children did not know what prompted their release.

An official from the Democratic Union Party (PYD), the main Kurdish political party administering Kobani, told Human Rights Watch that ISIS released the last 25 boys on October 29. The children are making their way to Turkey because of the fighting in Kobani, he said.

According to the four children interviewed by Human Rights Watch, ISIS guards at the Manbij school beat the children who tried to escape, did poorly in compulsory religious lessons, or did anything else perceived by their captors as misbehaving. ISIS gave especially bad treatment to the boys from families that had a relative in the YPG, the children said.

“It was really those whose families were close to the YPG who suffered most,” said one of the boys, aged 15. “They [ISIS] told them to give them the addresses of their families, cousins, uncles, saying ‘When we go to Kobani we will get them and cut them up.’ They saw the YPG as kafir [unbelievers].”

The 15-year-old said ISIS guards used an electric cable to beat children on the hands, back, and soles of their feet, especially when they misbehaved. He described one incident:

One child who muttered “Oh Mother!” when he was caught in another group’s room was strung up, suspended with his hands tied behind his back, one foot tied to his hands, and told he should call on God, not his mother.

The four boys said ISIS divided the children into eight groups, with each group sleeping in a different classroom. Each child received three blankets:two to sleep on the floor and one as a cover. The guards let them bathe once every two weeks. They provided food twice per day but did not allow the children to play outside after some of them escaped.

The children said they got very occasional visits and phone calls from their parents. They were also initially forbidden from speaking Kurdish.

All of the children described being forced to pray five times a day and undergoing intense religious instruction. The teachers also forced them to watch videos of ISIS in combat and beheading captives.

The children said the guards and religious teachers at the school were a combination of Syrian Arabs and people from Jordan, Libya, Tunisia, and Saudi Arabia. The Syrians gave the worst beatings, especially a man named Abu Shehid from near Aleppo, all of them said.

One of the boys, 16, explained more about the frequent beatings:

Those who didn’t conform to the program were beaten. They beat us with a green hose or a thick cable with wire running through it. They also beat the soles of our feet. The tire was used less often. I was once put inside the tire and beaten. They sometimes found excuses to beat us for no reason. The Syrian guards were the worst and beat us the worst. They made us learn verses of the Quran and beat those who didn’t manage to learn them. When some boys tried to escape, the treatment got worse and we were all punished and given less food.

The four boys said they got no explanation for their release beyond that they had finished their religious training. They were given 150 Syrian pounds (US$1), a DVD with religious material, and let go.

In addition to the children abducted in May, ISIS has seized other children and adult male and female civilians from villages near Kobani, and is apparently holding some of them hostage as a bargaining chip for the release of ISIS fighters held by the YPG, four Kurds from the Kobani area told Human Rights Watch (see details below).

On August 15, the UN Security Council passed resolution 2170, calling on all member states to take national measures to stop the flow of foreign fighters, financing, and arms to ISIS, Jabhat al-Nusra, and any other individual or group associated with al-Qaida.

On September 24, the UN Security Council adopted resolution 2178, urging states to counter terrorism by establishing screening measures, effective border controls, and other steps to prevent the recruitment, organization, and movement of terrorists, including those affiliated with ISIS. The resolution also urged states to improve cooperation, pursue prosecutions, and help build the capacity of other states to fight terrorist groups.

“Governments in the Middle East and the West should swiftly implement the UN Security Council resolutions aimed at curbing support for ISIS,” said Abrahams. “To stem ISIS abuses, governments need to tackle its fundraising and recruitment.”

A woman and her daughter-in-law from Kunaftar village near Kobani, interviewed together, said that ISIS had seized two men and 12 women and children after it captured the village on May 21. A document prepared by the YPG listed the names and ages of the 14 people, 6 of whom were children under 10. ISIS released the women and most of the children on June 28, the day before Ramadan began, but four months later were still holding the two men and one 17-year-old boy.

The daughter-in-law, 20, said she was one of those detained and released. She said ISIS held the 14 people in Manbij and interrogated them without violence about the captives’ relations to the YPG. The woman said she gave birth to a baby during her captivity and ISIS guards took her to a hospital for the delivery.

The woman’s mother-in-law said she went to the ISIS commander in Manbij during the group’s detention to complain. “I went to the emir of Manbij, Abu Hashim, to plead for him to release them,” she said. “He said: ‘Let the YPG release our people who they are holding prisoner and we will release them.’”

In Minas village, also near Kobani, ISIS seized seven civilian men when it captured the village in the beginning of October, a male relative of two of the captives told Human Rights Watch. Three of the men had stayed in the village as ISIS advanced; the other four, including two of the man’s uncles, returned after ISIS arrived to get some personal possessions, he said. The man said he called and briefly spoke with one of his uncles after the uncle had been caught.

A 40-year-old farmer from Ghassaniya (Helinj in Kurdish) village said ISIS had abducted four of his nephews, ages 16, 17, 18, and 27 or 28, in late February as they were driving through ISIS-controlled territory en route to Iraqi Kurdistan. The family found their abandoned vehicle at a place called Aliya on the Aleppo-Hassakah road, 10 km west of Tel Tamer, he said. “This area was under ISIS control and I have no doubt that ISIS took them for the purpose of frightening and terrorizing people,” he said.

Two officials from the PYD told Human Rights Watch that the four men are among an estimated 160 men and boys that ISIS abducted from the same location in late February as the group was traveling to Iraqi Kurdistan for work. They reported that none of the group is known to have been released.

Churches of Kurdistan become asylum from ISIS for refugees
Churches of the city of Erbil, the capital of the Iraqi Kurdistan, today are becoming a temporary home for dozens of Christians, Muslims, and Yazides, fled from the terror of the “Islamic State of Iraq and the Levant” extremists.
Comments
×