The Order of Saint Lazarus of Jerusalem Celebrates Orthodox Easter 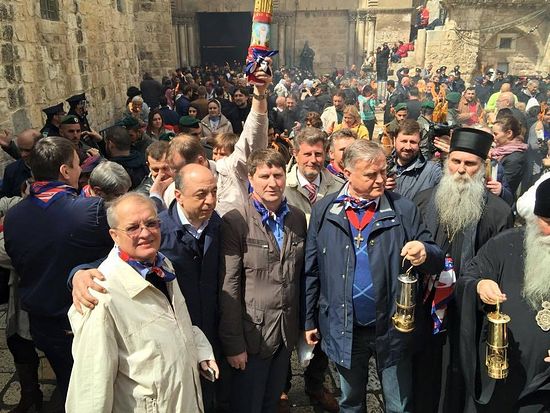 From Lazarus Saturday to Bright Monday of the Orthodox Christian Calendar, the Order of Saint Lazarus of Jerusalem fully partook in Easter celebrations with the Christian churches and communities of Jerusalem, Bethany, Bethlehem and Beit Jala.

As with almost every Orthodox Church, the Greek Orthodox Patriarchate of Jerusalem celebrates Easter on the Julian Calendar, in which Easter (also known as Pascha) and Holy Week falls on separate dates from the Gregorian (Western) Calendar two out of every three years. This year, Easter on the Julian Calendar fell on April 12th, with Lazarus Saturday being on April 4th.

In the Orthodox Church, the Holy Fire service is the most significant event of Holy Week in Jerusalem, when the Patriarch of Jerusalem is sealed in the tomb of Christ in the Holy Sepulchre (a structure that is also called the edicule), and emerges only when two bundles of thirty-three candles held in each of his hands have been lit by what Orthodox, Armenian, Coptic and many other Christians hold to be a miraculous occurence.

On Lazarus Saturday (April 4th), Mr. Dan Koski, Delegate for Christian Affairs represented the Order at an open-air service on the grounds of the Orthodox Girls School of Bethany, a mission school run by the Russian Ecclesiastical Mission and staffed by nuns part of the Convent of Saint Mary Magdalene of Gethsemane.

On Holy Saturday (April 11th), His Excellency the Grand Chancellor, Count Philippe Piccapietra, was present in the Church of the Holy Sepulchre at the invitation of the Armenian Patriarchate of Jerusalem, while His Grace the Most Reverend Jovan Culibrek, Bishop of Slavonia of the Serbian Orthodox Patriarchate, spiritual protector of all Orthodox members of the Order of Saint Lazarus of Jerusalem, was the official delegate of the first reception committee for the service of the Holy Fire for the Serbian Orthodox Church.

The service of the Holy Fire was broadcast from approximately noon until the Patriarch emerged from the tomb of Christ in the Holy Sepulchre, a structure known as the edicule, with two bundles of 33 candles apiece that signified the Holy Fire.

Orthodox Christians from both Palestine, Russia and elsewhere, along with Copts and Western pilgrims and visitors were present in both locations. Many of the Coptic visitors cheered in traditional Arabic ululations and clanged their liturgical cymbals at the sight of Patriarchate emerging out of the edicule of the Holy Sepulchre of the Holy Fire.

Following the reception of the Holy Fire at the Holy Sepulchre, His Grace Bishop Jovan flew to Serbia to present the Holy Fire to His Beatitude, Patriarch Irenej of Serbia, in Belgrade at Saint Sava Cathedral, while His Excellency the Grand Chancellor Count Philippe joined the official delegation of the Orthodox parish of Beit Jala to bring the Holy Fire to their community, where hundreds of local Christians and pilgrims alike joined in the processional ceremony. Despite an unseasonable downpour of rain, both services in Bethlehem and Beit Jala were exceptionally well-attended, with a joyous atmosphere throughout.

Lastly, on Bright Monday, April 13th, the Order of Saint Lazarus of Jerusalem greeted His Beatitude, Patriarch Theophilos III of Jerusalem at the Patriarchate, wishing him well with the traditional Easter declaration, “Hristos Anesti.”
The Order of Saint Lazarus of Jerusalem thanks all partners, benefactors and supporters of Holy Week activities in the Holy Land, and looks forward to both continuing and strengthening its presence during Holy Week in 2016.

Site of Jesus’s Trial May Have Been Uncovered in Jerusalem
Archaeologists have announced they may have uncovered the precise location of Jesus’s trial, and it’s not along the traditional Via Dolorosa path. Paschal Epistle of St. John Maximovitch, 1940
St. John Maximovitch
The present night is not an ordinary night! Brighter than day, it illuminates our souls! The rays of the Sun of the world illumine us and the whole universe, enlightening all who come to His light.
Comments
×