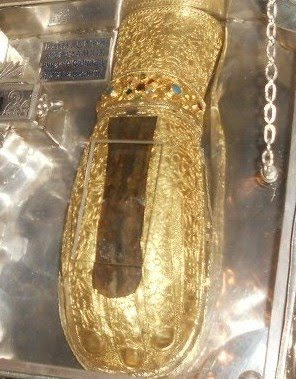 Among the many holy relics of Simonopetra Monastery on Mount Athos is the left hand of the Myrrh-bearing woman, St. Mary Magdalene. It is the most sacred treasure of Simonopetra. This hand is incorrupt, exudes a beautiful heavenly fragrance, gives off a bodily warmth as if it is still living, and works many miracles. Because of these many miracles, St. Mary Magdalene is held with great reverence by the monks of Simonopetra, who consider her to be the second foundress of the Holy Monastery. Below are a few examples of the grace which issues forth from this holy relic: 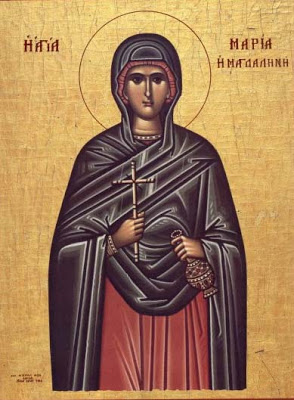 1. In 1945 a great fire took place in the forests of the Holy Monastery of Iveron. The wind was very strong so thatwithin a few hours the fire reached the ridge bordering the monasteries of Iveron, Philotheou, Xeropotamou and eventhe forest of Simonopetra. Everyone believed the forests would be destroyed. The monks of Simonopetra ran to the forest where the fire was. Two pious hieromonks named Neophytos and Panteleimon took with them the holy relic of St. Mary Magdalene. None of the monks dared approach the fire, lest they be encircled and unable to escape. However, asthe two brothers approached the fire with the holy relic, the fire was held back. The priests began a Holy Water Service then chanted a Supplication Service to St. Mary Magdalene. By the time the services were done, the fire was completely extinguished, to the great wonder of the fathers who were all gathered there as witnesses.

2. A similar miracle to the one above occurred in the forests of Simonopetra with the holy relic of St. Mary Magdalene in 1947.

3. In the region of Galatista of Thessaloniki in 1911 plant eating worms appeared destroying the plants. Residents asked for the holy relic of St. Mary Magdalene and a Holy Water Service. Immediately the worms began to disappear.

4. In 1912 in the region of Epanomis of Thessaloniki many locusts appeared. Residents asked for the holy relic of St. Mary Magdalene. After the completion of a Holy Water Service as well as a Supplication Service to St. Mary Magdalene, the locusts left. Residents highly honor St. Mary till this day for that miracle.

The Saint performs many other miracles every day for those who call upon her with faith. Was St. Mary Magdalene a Harlot?
Hieromonk Job (Gumerov)
The final conviction in the West about the willful and mistaken opinion that St. Mary Magdalene had been a harlot was made possible by a popular book by an Italian Dominican monk, Archbishop Jacobus de Voragine (Giacomo da Varazze), the Golden Legend (Legenda Aurea), which is thought to have been written in 1260. This collection of legends and lives of saints became the source of themes for art and literature.
Comments

Sr Mikaela7/23/2020 11:34 pm
Pax Dear St Maria Magdalena! You repented and knew to amend wholeheartedly! Please ask for mig and all sinners to follow your loving example! Glory to God!

Melina Navarrette7/21/2020 8:58 pm
Dearest St.Mary Magdaline, I pray and ask for your intercession with this world Covid virus, please pray for my Mother Hilda and her cousin Mirand. Both sick with rhumatoid arthritis and her cousin with confussion, fiber myalgia and beginning dementia. Ask your favor through Jesus Christ our Lord Amin. Doxa si o theos imon, Amin.
×