Orthodox Bio-Ethicist: Science Does Too Know When "Human Life" Begins 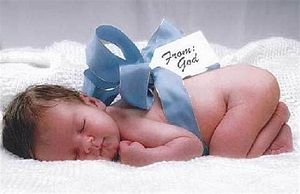 The buzz of obfuscation around “when life begins” has reached a crescendo of intensity in the wake of the Planned Parenthood imbroglio.

Such huffing and puffing about the earliest embryo–when the dismember and harvest of PP happens well into pregnancy.But I think the crapola must be answered. An article in Wired again pushes the manure that “scientists” can’t say “when life begins.” From the story:

With in vitro fertilization—combining sperm and egg in a lab—scientists could directly observe the process of sperm entering the egg for the first time. It actually takes place over as long as 24 hours; a series of biochemical changes need to happen before the sperm can enter.

So? When that is completed, a new organism has come into existence with its own genetic makeup distinct from the mother or the father.

Biologically, if the embryo is a member of our species, THAT’S when a new human life has come into being.

Then there is the old and tired “implantation” sophistry:

But even fertilization isn’t a clean indicator of anything. [It is]The next step is implantation, when the fertilized egg travels down the fallopian tube and attaches to the mother’s uterus.

“There’s an incredibly high rate of fertilized eggs that don’t implant,” says Diane Horvath-Cosper, an OB-GYN in Washington, DC. Estimates run from 50 to 80 percent, and even some implanted embryos spontaneously abort. The woman might never know she was pregnant.

But what is the entity that implants? Is it chopped liver? Is it a Martian? Is it dead tissue? No, it is a living embryo! This is Biology 101.

What is an embryo in this context? A human organism, a living entity. That many embryos might not implant, does not mean they were not alive before dying due to failure of the next necessary step of development.

And get this dodge about embryologists. Rather than quote one, the reporter engages in conjecture:

An embryologist might say gastrulation, which is when an embryo can no longer divide to form identical twins.

No. Embryology text books say it is at fertilization. For those who want to see these quotes, I have presented a long, but not exhaustive, list of pertinent quotes that be accessed here.

And finally, we get to the old switcharoo from science to ideology:

As a doctor, Horvath-Cosper says, “I have come to the conclusion that the pregnant woman gets to decide when it’s a person.”

Right. She’s pro abortion, and so she shifts the discussion from when a human life–an organism–comes into being to a “person,” which is a subjective concept based in philosophy, morality, and values.

And note, her ideology would permit abortion while even a toe is in the woman’s body during the birth process.

And it would mean that the baby can be a person one day, and not the next–which sure ain’t science!

The pro-abortion side generally proclaims the mantle of pro-science, while castigating their opponents as ideological or theocratic.

I have found the opposite is true. Pro-lifers argue science in the belief that IF ONLY they could prove to people that an unborn baby is a human life, people will come to accept their point of view.

Which is why pro-abortion types argue subjective ideology and belief, as they engage in sophistry to try and debunk basic science and pretend that science doesn’t know when a human life begins. Doctor Sued for Saying No to Euthanasia

Doctor Sued for Saying No to Euthanasia
Wesley J. Smith
Once you open the door to assisted suicide/euthanasia, you are on the road to death on demand. The only question is how long it takes to reach the destination. ChiRho6/13/2017 5:47 am
I've read of hospitals intentionally hiding information about premies whom they save and care for because the hospitals know that outside of the NICU people are getting abortions with children who are older than these ones who survive premature births.
They most certainly know when life begins, and they additionally know that children are regularly being murdered that are even old enough to survive outside of the womb. It's sick.
×