Choral music wafted across the ornate St. Nicholas Antiochian Orthodox Cathedral Friday evening. The choir of priests, in black cassocks, sang in English and sometimes Arabic. The faithful traveled from north and south, as far as Canada and Texas, to attend the vesper prayers. They stood at the pews and sang along. At the center of the cathedral’s altar stood an icon adorned with white flowers. It was a portrait of Raphael Hawaweeny – Brooklyn’s only saint.

“St. Raphael described himself as a Syrian-Arab by birth, a Greek by higher education, an American by residence, a Russian in heart and a Slav in soul,” Chatfield said.

The evening prayers commemorated the Centennial Jubilee of the Falling Asleep of St. Raphael of Brooklyn. Raphael established this Eastern Orthodox parish in New York in 1895, pastor Thomas Zain said.

Zain serves as archpriest to the St. Nicholas Cathedral, which was under the care of Raphael until his death in 1915. “It is a great honor for me to continue on that legacy that he started. I feel that I have to care for this community that he started and not mess it up somehow after a 100 years,” Zain joked. 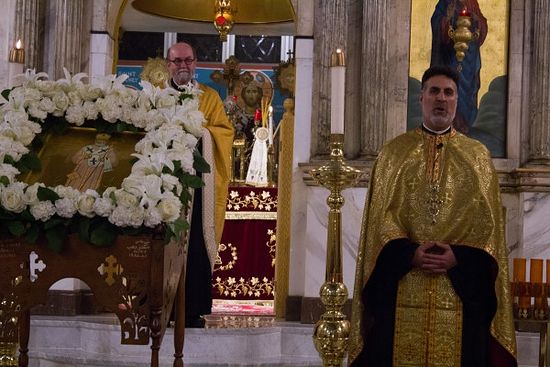 Pointing to an engolpion, an amulet around his neck, the bishop shared a story with the congregation. “This is from 1913,” Joseph said. “It was Bishop Raphael’s.”

The crowd gasped audibly in awe.

“I found it in the archdiocese years ago and I wouldn’t dare use it until this morning,” Joseph continued. “Everyday I saw it in the closet but today I took the courage and I put it on me. It is a great blessing for us to celebrate this piece of a holy man.”

“Oh, how beautiful,” 76-year-old Stella Makris exclaimed from the pew. 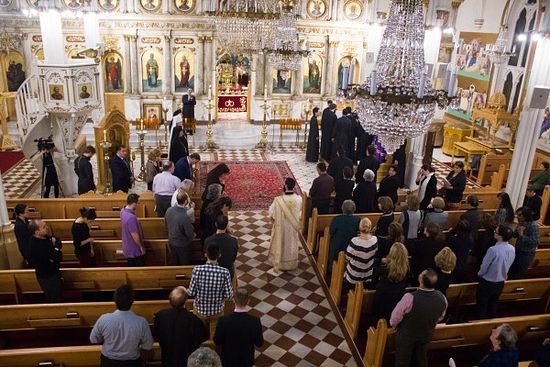 People traveled from as far as Canada and Texas to attend the Friday vesper prayers commemorating the centennial death anniversary of Saint Raphael – Brooklyn’s only saint, at Saint Nicholas Antiochian Cathedral in Brooklyn, New York, on Nov. 7, 2015 . Photo: Sneha Antony.


Markis, a Queens’ resident, said she is grateful to St. Raphael for uniting the Orthodox community in the Americas. “At the time that he came to the United States, truly all the Orthodox were scattered all over. There was no one really to lead them,” Gmarkis said. “He (St. Raphael) had the gift of God to be able to discern among the scattered sheep of America and bring them together.”

Markis, a Greek-American, said Raphael served beyond his Middle Eastern Orthodox community. “It didn’t matter whether they were Greek or Syrian or Russians or wherever,” she said.

Zain said Raphael traveled across North America and Latin America, marrying couples, baptizing babies and spreading the Orthodox faith. The diversity Raphael strived toward was evident inside the cathedral Friday. Worshippers of different ethnicities such as Asian, Arab and Hispanic united in song and worship.

“We have people from every background and every former faith that have joined the orthodox church and that really started with him (Raphael), with the foundation that he laid,” Zain said. 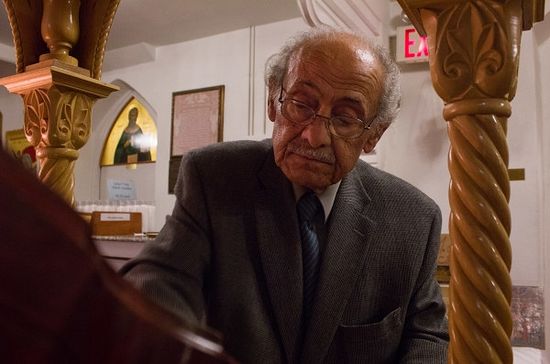 Palestinian-American Farah Dahab, who volunteers at the parish, quietly lit candles and wiped the cathedral icons during the prayers. Dahab said he has been serving the church since his arrival in the United States in 1971.

“I came to America on May 26, 1971. I have been working with the church of St. Nicholas for 44 years and four months,” Dahab said proudly.

Dahab said he feels a connection to the saint because of the similarities in their stories.

Raphael was born in Lebanon after his family fled the persecution of Christians in Damascus in the 1800s. Dahab, 80, said he and more than 79 members of his family fled Palestine in 1948 during the Arab-Israeli war: the First Intifada.

“We emigrated to Egypt and we followed the same route of the holy family: Jesus, Joseph and Mary,” Dahab said. “They took a donkey. We took a train.”

Thousands died in the war, which also displaced nearly two-thirds of the Palestinian population. It was Dahab’s dream to come to America. His prayers were answered 23 years later. Dahab said he feels honored to serve at Raphael’s cathedral. “I feel very, very attached to it. I feel devoted,” he said.

Loussi Eid, 36, also reflected on Raphael’s journey and the current situation in her home country of Syria. She said it was tragic that Syria, the location for the roots of the Eastern Orthodox faith, is now in turmoil. “It is sad that in the place where everything has started has lost God. That is how it seems,” Eid said.

Eid prays that a person like Raphael will intercede: “Just like Saint Raphael came and helped a lot of people here, we hope that somebody comes to Syria and does the same.” 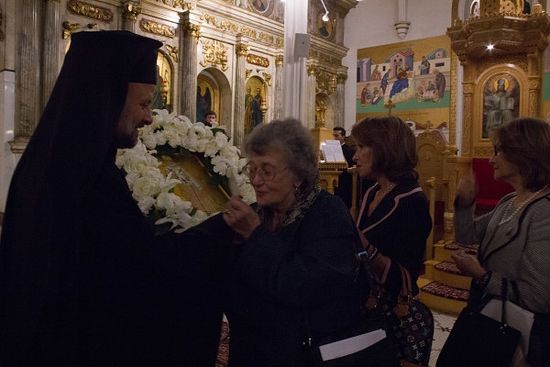 Parishioners gathered in a line to kiss the icon of Saint Raphael at the end of the Friday vesper prayers at St. Nicholas Antiochian Cathedral on Nov. 7, 2015. Photo: Sneha Antony.

At the end of the Friday prayers, the congregation formed a line toward Raphael’s adorned icon, and His Eminence Joseph’s engolpion. People approached the icons and kissed them. Markis, among them, beaming. “We touched a part of heaven today,” she said. “A part of paradise.” On the Sunday of All Saints of America
Jesse Dominick

On the Sunday of All Saints of America
Jesse Dominick
Although he is not officially canonized, Fr. Seraphim is the first truly American saint. Source of the week: an interview with Fr. Sebastian Dabovich
Next to the Roman Catholics the Russian [Church] has the greatest number of communicants of any church in the civilized world. On the coast the two great strongholds of the Russian church are in Alaska and a section of California. Last year I made a trip of 6,000 miles in and along the Alaskan coast, inspecting our mission stations.

40TH Anniversary of St. Herman's canonization to be celebrated during annual Spruce Island Pilgrimage August 9
Hundreds of Orthodox Christian pilgrims are expected to flock to Spruce Island, AK on Monday, August 9, 2010, to celebrate the 40th anniversary of the canonization of Saint Herman of Alaska, one of the first -- and surely the most beloved -- Orthodox Christian missionaries to serve the people of Alaska.
Comments
×