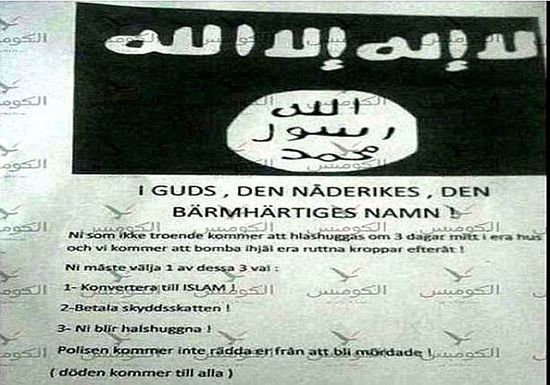 Sweden welcomed Syrian Refugees with open arms. Sweden’s government and people rolled out the welcome mat for refugees by bringing in over 200,000 Syrians, many of whom settled in Stockholm. The humanitarian act of generosity and virtue has now been met with messages of hate and intolerance, and if true, those very refugees are threatening to kill Swedish citizens if they refuse to convert to Islam.

According to the Daily Mail, tensions started in October within the Swedish community who reported to authorities that they were being harassed and threatened with beheading if they didn’t convert to Islam. Walls of their businesses were subjected to threatening graffiti which read, “Convert or Die,” and, “The Caliphate is Here.”

The Swedish authorities sent officials to check identities at the border.

Now, the most serious threat to public safety has emerged. Flyers with ISIS flags have been deposited into citizens’ mailboxes. The flyers read:

In the name of Allah, the merciful, full of grace. You who are not believers will be decapitated in three days in your own house. We will bomb your rotten corpses afterwards. You must choose between these three choices: 1. Convert to Islam. 2. Pay the jizya [religious tax] for protection. 3. Or else, you will be decapitated. The police will not prevent or save you from you being murdered. (Death comes to all of you).

Police and intelligence officials are taking the threat of forced conversion very seriously and are investigating the matter. The letters have been distributed into mailboxes across the entire country of Sweden, not just in Stockholm.

If it is discovered that ISIS is behind the threats and is actually going to carry out the plan to convert Swedish residents to Islam, how Sweden handles the crisis will be closely monitored and evaluated.

Republican leaders in the United States have called for a pause of President Obama’s plan to bring Syrian refugees into the country. Governors across the country have rejected Obama’s plan to bring in Syrian refugees citing concerns that they have not properly been vetted to insure that they are not simply ISIS infiltrators. It appears as though Sweden is facing an ISIS foe in their own country, a compromise Americans are not willing to make. Indonesia Deploys 1,500 Police to Protect Churches Against Christmas ISIS Attack
Today Online reported that the officers have been dispatched across Indonesia's North Sumatra province, with a mission to protect churches during Christmas and New Year celebrations. Christians in Sweden Given Option by Islamic Vandals to 'Convert or Die'
For now, Swedish authorities are investigating the graffiti but are not classifying the act as a hate crime. However, police officer Bertil Claesson explained that it would be "almost impossible" to investigate the incident because they have no witnesses or evidence to work on.

Henry12/18/2015 5:22 pm
This disgusting propaganda is so obvious, and who couldn't see this coming from a mile away? Now "conveniently" America can point to this incident and say, See! We can't have accept Syrian refugees because all they wanna do is kill us. What absolute nonsense.

Islam does NOT condone forcible conversion, NOR does it allow Muslims to kill people "of the Book" which means the Bible, which means that the Qu'ran does NOT allow Muslims to commit violence against Christians. For anyone reading this horrible news article, please understand that the Syrian refugees are NOT I repeat NOT responsible for these letters, if this is even a true report. This is the working of Zionism and Western terrorism. Ask yourself who benefits?
×