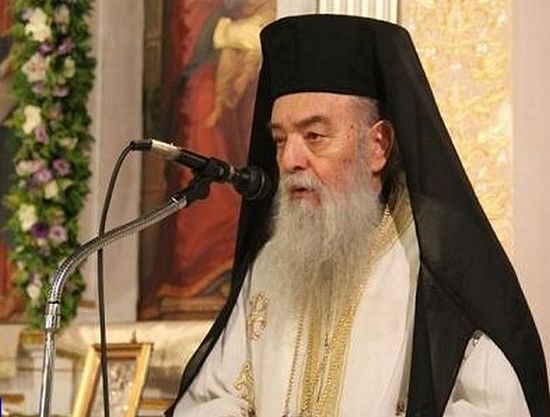 “How could it happen that the Holy and Great Council on Crete called heterodox heretical communities ‘Churches?’” His Grace asked. “They said, wrote, and signed the term 'heterodox Christian Churches.' So now heretics have become a ‘Church?’ Then what one Church do we talk about in the Symbol of Faith?”

Met. Jeremiah noted that the Greek Church’s delegation at the Council breached its obligation to advocate the unanimously adopted position of the Holy Synod and its proposed amendment, “Christian confessions and communities.”

“The worst part,” according to the metropolitan, “is that in calling the heterodox ‘Churches,’ they gave it weight, presenting the matter in such a way as if this position has historical justification:

"‘The Orthodox Church accepts the historical name of other heterodox Christian Churches and Confessions…’ What does ‘historical name’ mean? When and where did the Holy Fathers call heresies and schisms ‘Churches?’ Nowhere and never!”

“The saddest part” according to Vladyka is the signing of “propositions that are erroneous from a dogmatic and ecclesiological point of view” by the primates of the Local Churches and so many members of the Council’s delegations.

Met. Jeremiah stated that as a bishop he is united with those who refused to sign the document which is “erroneous from a dogmatic point of view:”

“We, Gortys and Megalopolis, support them, because we do not recognize heresies and schisms as ‘Churches.’” Metropolitan Hierotheos of Nafpatkos describes problems with documents adopted on Crete
Vladyka Hierotheos underlined that it was due to “theological motivations” that he did not sign the text “Relations of the Orthodox Church with the Rest of the Christian World,” but the documents “The Mission of the Orthodox Church in Today’s World” and “The Sacrament of Marriage and its Impediments” were signed by him with reservations.
Comments

We do, though, have a language problem. We cannot rightly call these /cultoi/ "churches," in the theological sense, though does, lexically, include any "called assembly," even a city council or a jury.

What, then, do we say, in such a way as not to have any apparent contradiction between our conversation with one another and with those without? "Denomination" is a meaningless euphemism: name. So it is, or has, a name/ Historically, there has always been a difference between the Christianity as delivered by the Apostles, and the "Christendom" of the Holy Roman Empire and its descendants. The /dom/-inion of those "christened" as such is still recursive, but there is more historic weight and meaning already assigned to "Christendom" than such an oxymoron as, "separated churches."

Might we be better-advised, then, to recognise the reality of the members, sects, or descendants of Christendom than to embrace any sectarian who has been in some way baptised as "our fellow Christians?"
×