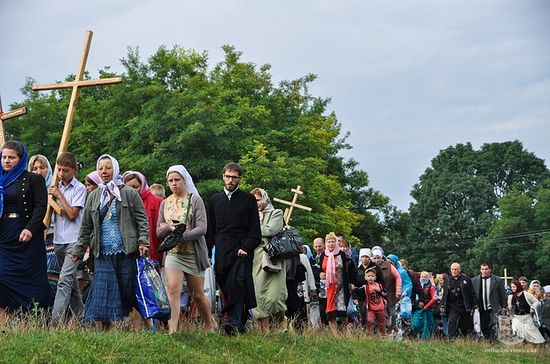 A prayerful procession from Kamenets-Podolsk to the Pochaev Lavra will be held on the feast of the Transfiguration, August 19. The Cross procession has a more-than-one-hundred-year history, reports the Information-Education Department of the Ukrainian Orthodox Church.

Every year, after the festive Liturgy in the Kamanets-Podolsk cathedral of the holy Right-Believing Prince Alexander Nevsky, the faithful set out on their path. They arrive to the Pochaev monastery for its patronal feast, the Dormition of the Most Holy Theotokos.

Thousands of pilgrims covering the 210 kilometers from Kamenets-Podolsk to Pochaev have gathered throughout the long history of the procession. Believers of the Kamanets-Podolsk, Chernivtsi, Volyn, Odessa and other dioceses of the Ukrainian Orthodox Church take part in the procession every year, as well as pilgrims from abroad. The pilgrims walk in the Cross procession for a week.

On August 15 believers from the village of Golinchintsi Shargorod of the Vinnytsia region processed to Jehosophat Valley where a Moleben and Liturgy were served. The procession gathered more than three thousand pilgrims. A procession of peace, love and prayer for Ukraine
Metropolitan Onuphry (Berezovsky)
"We believe that the Mother of God, who so many times defended our land, today stands with tears by the throne of her Son praying for us. And we must, having cast aside anger, hatred, and malice, and having armed ourselves with love and forgiveness, strengthen our podvig of prayer in order to stop the flow of maternal tears, that children might not be made orphans, women—widows, children—invalids, that our cities and towns might not be destroyed, and houses abandoned. Such is the goal of the All-Ukrainian cross procession—a walk of peace, love and prayer for Ukraine."
Comments
×