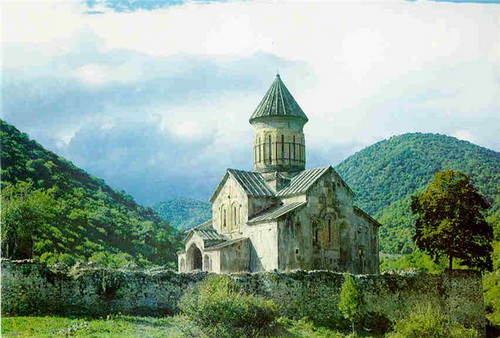 According to some information, there are around 375 historic architectural monuments on the territory of the Tetritskaro Municipality within the historic province of Kvemo Kartli in southeastern Georgia. Among them are the monastic complexes of Pitareti, Gudarekhi, and Pirgebuli; the churches of the Manglisi Cathedral, Gokhnari hall church, the church of the Mother of God of Tsintskaro, the domed church of Didi Toneti, the Chkhikvta church of the Holy Trinity and others; and the ancient city fortress of Samshvilde along with the fortresses of Kldekari, Partskhisi, Orbeti, Khuluti, Birtvisi and so on. The Tbilisskaya Nedelya (“Tbilisi Week”) newspaper acquaints the readers with two unique monuments of antiquity – the monastic complexes of Pitareti and Gudarekhi.

The Pitareti monastic complex is situated some 100 kilometers (around sixty-two miles) from Tbilisi in Tetritskaro Municipality. The monastic constructions are built in the deep canyon of the river Ktsiya (Khrami). High mountains, covered with deciduous wood, tower above either side of the narrow gorge. There are also some conifers which give the landscape a special flavor. Due to the complex terrain the monastic buildings are located on different levels, and the ancient stone fencing is ruined here and there, while the new one, with embrasures for firearms, is better preserved. A half-ruined bell tower still survives with a wine cellar and remains of other monastic buildings to the north of it. The domed church of the Most Holy Mother of God – a masterpiece of Georgian architecture – dominates the monastery ensemble.

The famous Georgian scientist, architect, and Doctor of Science in Art History, Professor Parmen Zakaraya (1914-2003), in his book, Georgian Central Dome Architecture, writes: “A study of Pitareti Church is yet to be written, but it takes its rightful place in the history of world Church architecture, first of all, thanks to the works of Academician Georgy Chubinashvili, such as in his On the National Form in the Architecture of the Past.” Professor Zakaraya himself in his above-mentioned work provides a description of Pitareti Church and an architectural and artistic analysis.

The domed church of Pitareti is built with the use of patterned stone which makes it particularly attractive. The temple’s inner space is spacious and roomy and the chancel is especially lit. In the view of Professor Zakaraya, the stylistic approach of the architect who used the contrast of light and shade is revealed in the unevenness of illumination. It gradually becomes darker as you move from the center towards the outer parts, and it is already almost dark in the aisles. The effect of irregular lighting was achieved by the architect with the use of a specific number of windows of different size. 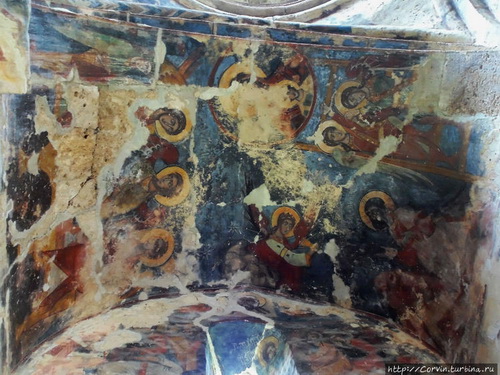 The architect placed twelve windows on the dome’s cylindrical surface through which abundant light penetrated into the church and reached all its four outer parts.

The Pitareti church became famous not only by its perfect composition and splendor, but also by its brilliant ornamentation along with the décor on the facades and the cylindrical drum under the cupola.

In 1750 the Pitareti church and monastery were robbed during a raid and life stopped there for about 250 years. In 2007 Pitareti became an active Orthodox center again, with regular services and the annual “Pitaretoba” festival. However, it also has a serious problem as there is no road leading to the monastery and the river Ktsiya is an obstacle. The clergy, parishioners and pilgrims hope that the local authorities will be able to find funds for constructing a pedestrian bridge and parking. 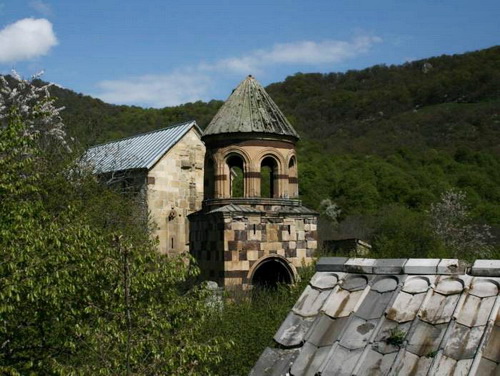 Gudarekhi Monastery, another historic monument, is very interesting as well. Its main church is one of those rare monuments of Georgian Church architecture whose architects’ and building owners’ names are known. The south wall of the main Gudarekhi church still has a building inscription in asomtavruli [the oldest Georgian script] which was used only in Church (not secular) texts. The inscription reads that the church was built “in the Name of God and under the protection of the Great Martyr George the Victorious by the hand of Chichiporidze, a sinner, for the prayers and glorification of Queen Rusudan…” The church was consecrated by Bishop Anton of Manglisi. Queen Rusudan who is mentioned in the inscription was identified by some historians with a tutor to Princess Tamar and sister of King George III and identified by others with a daughter of Queen Tamar (Takaishvili). Thus they tried to determine the date of this building judging by the lives of these women. Meanwhile, the chronicler clearly stated that Queen Rusudan who was gravely ill died in Tbilisi and her remains were solemnly moved to Kutaisi and interred at Gelati Monastery. Had Queen Rusudan been buried at Gudarekhi Monastery the chronicler would have certainly known it.

But who then was Queen Rusudan by whose order the main church of Gudarekhi Monastery was built? Doctor of Historical Sciences Guliko Mchedlidze found one more Queen Rusudan: a daughter of King Demetrius II the Self-Sacrificer (c. 1259-1289). The latter was married to Theodora/Irene, a daughter of Emperor Emmanuel of Trebizond, with whom they had four sons and one daughter named Rusudan. Demetrius gave Rusudan in marriage to a son of Grand Emir Buga. Soon the plot of Buga against Khan Arghun was exposed and Buga was executed as an instigator together with his son. At the same time Rusudan’s husband and children were killed. At that time the queen herself was far from the scene of events and thus escaped death. Demetrius II himself was beheaded when he came to the headquarters of the Mongols. Catholicos Abraham of Georgia brought his remains and buried them at Svetitskhoveli. Academician Elena Metreveli found out that the daughter of King Demetrius of Georgia later remarried to a wealthy Georgian feudal lord named Taka Panaskerteli, a ruler of Tao – a historic Georgian region which now belongs to Turkey. After the death of Panaskerteli, Rusudan returned to Kartli. The date of her death is unknown. She built the main church of Gudarekhi as her burial vault. According to her will, the queen was interred at Gudarekhi Monastery after her repose. King Luarsab II of Kartli, in his royal charter to Gudarekhi Monastery, mentioned this event. According to Guliko Mchedlidze, Queen Rusudan was very faithful to her motherland and the Christian religion, as evidenced by her generous donations to the Monastery of the Cross in Jerusalem along with her building activities at Oltisi and Gudarekhi. Georgia: Graffiti in Arabic and Turkish appeared on walls of ancient monastery in Mtskheta

Georgia: Graffiti in Arabic and Turkish appeared on walls of ancient monastery in Mtskheta
A criminal investigation was opened under Article 2582, Section 3 of the Georgian criminal code (destruction of national memorials, and damage to or destruction of monuments included in the world heritage list), which is punishable by four to eight years of imprisonment. One Million GEL to be Spent on David Gareja Monastery Rehabilitation
David Gareja is a rock-hewn Georgian Orthodox monastery complex located in the Kakheti region of Eastern Georgia, on the half-desert slopes of Mount Gareja. The complex includes hundreds of cells, churches, chapels, refectories and living quarters hollowed out of the rock face.
Comments
×