“He sought the most important thing—prayerful union with God”

Elder Iliy on St. Silouan the Athonite and the importance of prayer

Schema-Archimandrite Iliy (Nozdrin), spiritual father of His Holiness, ascetically struggled on Mt. Athos for more than ten years in one of the sketes of St. Panteleimon Monastery—the Old Russikon. Namely there, at the mill just a few decades earlier Venerable Silouan the Athonite carried out his obedience. In 1967 the book of his life and teachings became a spiritual guide for the now-revered elder, then novice Alexei of the Pskov Caves Monastery.[1] 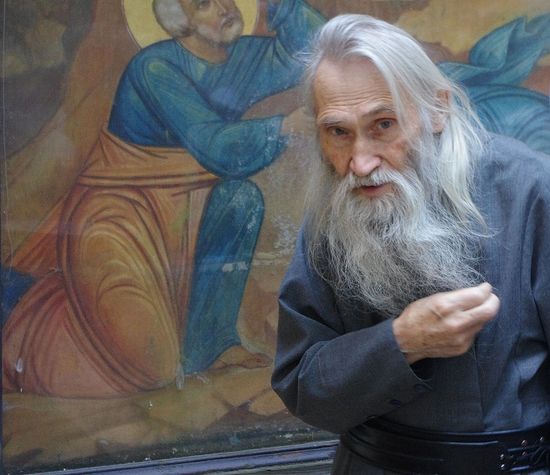 —Batiushka Iliy, it’s known that when it came out, the book Elder Silouan the Athonite, written by Archimandrite Sophrony (Sakharov), had a great influence on you. What about it so struck you?

—When I read the book of Elder Silouan it opened up a bright expanse for me where I found what I needed—answers to my various questions. Generally speaking, the book gave a clear and concise presentation of the content of our faith.

Elder Silouan is a modern podvizhnik.[2] In him there was no hypocrisy, no prelest. He wrote and spoke by the grace of God. That which the Lord revealed to him by the Holy Spirit he heard and repeated. He was a man without higher education, although he did have some schooling of course. His book became acclaimed. He didn’t write it himself, but rather Fr. Sophrony wrote it from his words. It was translated into I don’t know how many languages, but more than ten for sure. Believers who turn to this book seeking truth— the Truth, find it. I can’t speak about this book with high enough praise and gratefulness to Elder Silouan.

He, it can be said, was not such an ascetic, but he sought for union with Christ. He sought how to come to the Lord, to serve Him, to be a true monk. Most importantly—he sought prayer and fullness in true union with God. The Lord heeded his desire and Himself appeared to him. “If it had continued,” said Elder Silouan, “then I, probably would have melted. My soul would have dissolved at the glory of God’s love and grace, unable to bear, had it continued longer, this vision of Christ.”

The Lord left such a trace of His grace, the power of grace, that until his death he prayed unceasingly. We must read this book. It is a revelation, how he himself expresses his experience! How he wept and prayed! When grace left him, he cried out: "Lord!" And the Lord again imbued him with the strength of grace. His prayer was unceasing, continuing even in sleep. 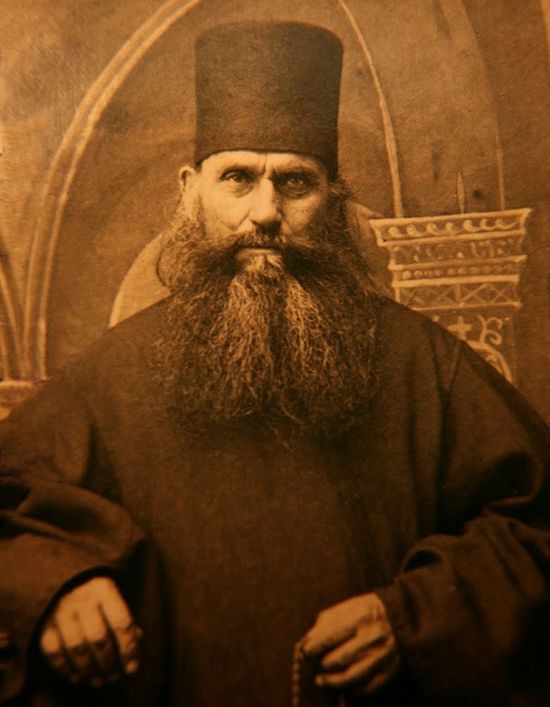 —How can we learn the activity of St. Silouan the Athonite: keep your mind in hell and despair not?

—It’s simple: if a man prays then he won’t be full of despair. This is said on the basis of humility. There is worldly, secular pride, and also spiritual pride: when a man receives a special closeness to God, is strengthened in prayer, becomes acquainted with spiritual experience, undoubtedly the thought will appear to him that he is a man of very high spiritual life, conscious that he is, so to speak, already a saint. This is the danger for ascetics.

Therefore the Lord doesn’t give many such a high degree of grace, of such inspiration by the power of God even to the point of wonderworking, that he won’t be able to preserve it due to his spiritual pride. When a person embraces pride it is incompatible with the presence of a high measure of grace from the Lord.

The devil presented himself in full human stature before Elder Silouan. The devil is a spirit and can materialize only by the allowance of God. The ascetic was perplexed: why is he praying, while the devil stands before him, not disappearing? The Lord revealed to him that it was because of his spiritual pride; in order to not have it, he must consider himself the smallest and most sinful, and for his sins an heir to hell.

If the Lord gives us something we should acknowledge that all of our gifts, both earthly and spiritual, are from God. We have nothing to be proud of—neither material goods, nor intellectual achievements, nor any kind of merits—none of our earthly riches. If the Lord grants, it is of His mercy, neither of our talents, nor strength, nor labors—nothing of ours, but only the compassion of God. Therefore everything spiritual that Elder Silouan received through the Savior’s appearance—it’s all the grace of God.

—What can Mt. Athos offer to modern man?

—The Holy Mountain is, by the grace of God, the lot of the Mother of God, and since the fifth century a place of residence for monks. Somewhere around the tenth century by imperial decree Athos was officially designated for monks, the ban on women entering upon the Holy Mountain arising at that time.

There to this day there are twenty monasteries and many sketes, or, as they are called, kelli. Some sketes, such as our former St. Andrew’s or St. Elijah’s, even surpassed the Greek monasteries in size. We also had about three dozen or more kelli. There also used to be nomadic monks living there, and there still are. They’re poor monks who don’t even have their own cell but just ascetically struggle wherever they find themselves.

Athos is first of all the keeper of our Orthodox faith. Nothing else could confer meaning upon our lives other than the salvation of the soul. What did the Lord designate? Love the Lord with all your heart, soul, mind and strength, and your neighbor as yourself (cf. Mt. 22:37-39). The Holy Mountain of Athos is the realization of this Christian ideal throughout the course of many centuries of Christian history. 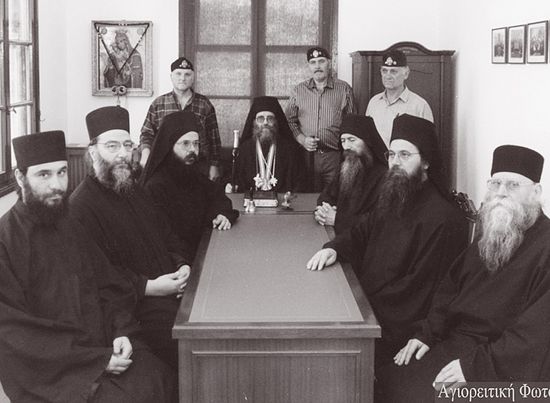 —What is required of someone desiring to struggle on Athos?

—Athos is subject to the Ecumenical Patriarch. There exists there the so-called local spiritual leadership—the Holy Kinot or Epistasia or Community. There’s also the secular authority—a governor—on the Holy Mountain of Athos. Twice a year there is a specific meeting there of the representatives of the ministries of Nothern Greece with the governor present. In addition to the permanent representative of each monastery, the abbots are also present at these meetings.

You can try to get to Athos through our Athonite podvoriye here in Moscow. Also, if someone travels to an Athonite monastery he can ask there directly to stay. If he wants, for example, to live in our St. Panteleimon Monastery, with the monastery’s consent the Holy Community can decide about his residency on Athos.

—How does Athonite monasticism differ from our currently reviving Russian monasticism?

—There’s one law. There is no other law but the Gospel. Nothing that our Orthodox faith affirms and that the Orthodox Church handles can in any way diverge from the Gospel truths elucidated for us by the holy fathers. The Holy Mountain is simply distinguished by its historical continuity. It’s the same as comparing a specially revered icon to a regular one—it's just that it’s already received grace. Or it’s like asking how someone with spiritual experience differs from someone who’s just beginning to live the Christian life. So it’s just that Athos has already accumulated the experience of the spiritual life. You can go into a church that’s just been consecrated and to one where they’ve been serving for several centuries already. You really won’t feel that Divine services of full order and grandeur have been served there for a good long while already?

—Batiushka Iliy, what’s the most important thing now for us Orthodox Christians?

—Jesus Christ is the same yesterday, and today, and forever (Heb. 13:8). And such is our podvig: as man was saved in the first centuries, so in the middle ages, so he will be saved in our time as well. There’s no difference in how they believed then and how we believe now in the Holy Trinity and the holy truths and dogmas. As Solomon said: There is no new thing under the sun (Ecc. 1:9).

—How can we learn to pray?

—Those who seek Truth and truly seek good for themselves will learn. Ask, and it shall be given you; seek, and ye shall find; knock, and it shall be opened unto you (Mt. 7:7). The Lord has blessed: if you want to learn, learn. Truly, in the Soviet period there were many temptations. State atheism imposed its administrative arm on the Church, on the whole of Christian life in our country. In the circumstances of those years, those who wanted to be saved became confessors and martyrs. Some, of course, couldn’t endure and departed from the faith.

—How can the Russian people return to faith?

—Pray. Those who want to save their souls will make the effort.

[1] The future elder began his monastic path in the Pskov Caves Monastery which he entered in 1966 and where he bore obedience for ten years. At the very beginning of his monastic path the book Elder Silouan the Athonite found its way into his hands. In 1976 by decision of the Holy Synod the by-then Hieromonk Ilian was sent to the Russian Monastery of St. Panteleimon on Mt. Athos, from where in the late 1980s he was transferred to the recovering Optina Pustyn Monastery as a spiritual father. There’s a known letter written by Elder Iliy from Optina Pustyn on Pascha in 1992 to the Monastery of St. John the Baptist in Essex, England, to the author of the book Elder Silouan the Athonite, Archimandrite Sophrony (Sakharov). Here is a fragment of the letter, particularly about the book:

I confess that, since 1967, when the book Elder Silouan wound up in my hands, I somehow immediately climbed up the spiritual heights, and, so to speak, saw the light. From that time this book has been a trusted friend. At the Old Russikon I often had to receive pilgrims and all the people arriving to the monastery, to show them the churches and bring out the relics for them. I can say that even before the glorification of Elder Silouan many revered him as a saint. I greatly appreciate that precisely You, dear Fr. Sophrony, did so much not just for the sake of the honor of Elder Silouan, but carried out your work mainly for the strengthening of faith and salvation of many. From everyone who has read your book I have heard only positive appraisals, and, to speak openly, not just positively, but with emphatic love for this book… It’s impossible to solve problems without God
Nikita Filatov, Schema-Archimandrite Iliy (Nozdrin)
What is prayer? Prayer is conversation with God. We nourish ourselves every day. We maintain our own physical existence until the last minute of our lives. But true spiritual life is beyond the scope of this world—it is our relationship with God, and it happens through prayer. Elder Iliy (Nozdrin): “Now our duty is to pray with all our zeal so that the Lord might reconcile our lives”
Last Sunday, the visit to Valaam of Schema-Archimandrite Iliy (Nozdrin), confessor of the Optina Monastery’s brethren and an Orthodox elder famous all over Russia, came to an end. This year he has turned 82.