Patristic Testimony on the Tollhouses: the Western Fathers

The Way of All Flesh: Conversation 2, Part 3

See Conversation 1: What happens to the soul after death?

See Conversation 2, Part 1: The Bible on the aerial tollhouses 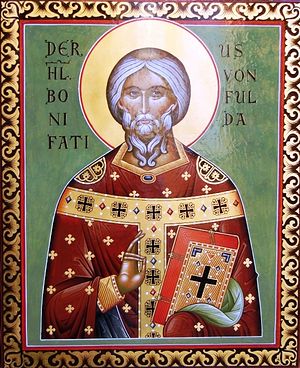 St. Boniface.
So that we would not form the impression that the teaching on the aerial tollhouses was only known to the Eastern Fathers of the Church, we will turn to testimony from the book by Fr. Seraphim (Rose), where he show that he was familiar with the many different Orthodox Western (Latin, the pre-schism period of the Church.—Archpriest O. S.) sources, which were never translated into Greek or Russian and which abound with descriptions of the tollhouses. The term “tollhouses”, it would seem, as Fr. Seraphim (Rose) writes, is limited to Eastern sources, but the reality is described in Western sources is identical.

St. Columba, for example, the founder of the island monastery of Iona in Scotland (†597), many times in his life saw the battle in the air for the souls of the newly departed. St. Adamnan (†704) relates those in his Life of that Saint. Here is one incident.

St. Columba called together his monks One day, telling them, “Now let us help by prayer the monks of Abbot Comgell, drowning at this hour in the Lough of the Calf; for behold, at this moment they are warring in the air against the hostile powers who try to snatch away the soul of a stranger who is drowning along with them.” Then, after prayer, he said, “Give thanks to Christ, for now the holy angels have met these holy souls, and have delivered that stranger and triumphantly rescued him from the warring demons.”[1]

St. Boniface, the 8th-century Anglo-Saxon “Apostle to the Germans” related in one of his letter the account given to him personally by a monk of the monastery at Wenlock who died and came back to life after some hours.. “Angels of such pure splendor bore him up as he came forth from the body that he could not bear go gaze upon them… “They carried me up,’ he said, ‘high into the air…’ He reported futher that in the space of time while he was out of the body, a greater multitude of souls left their bodies and gathered in the place where he was than he had thought to form the whole race of mankind on earth. He said also that there was a crowd of evil spirits and a glorious choir of the higher angels. And he said that the wretched spirits and the holy angels had a violent dispute concerning the souls that had come forth from their bodies, the demons bringing charges against them and aggravating the burden of their sins, the angels lightening the burden and making excuses for them.

“He heard all his own sins, which he had committed from his youth on and had failed to confess or had forgotten or had not recognized as sins, crying out against him, each in its own voice, and accusing him grievously… Everything he had done in all the days of his life and had neglected to confess and many which he had not known to be sinful, all these were now shouted at him in terrifying words. In the same way the evil spirits, chiming in with the vices accusing and bearing witness, naming the very times and places, brought proofs of his evil deed… And so, with his sins all piled up and reckoned out, those ancient enemies declared him guilty and unquestionably subject to their jurisdiction.

“ ‘On the other hand,’ he said, ‘the poor little virtues which I had displayed unworthily and imperfectly spoke out in my defense… And those angelic spirits in their boundless love defended and supported me, while the virtues, greatly magnified as they were, seemed to me far greater and more excellent than could ever have been practiced by my own strength.’”[2]

Let us pay attention to the last paragraph: opponents of the teaching on the tollhouses pay no attention—or do not want to pay attention—to the fact that at the tollhouses only those sins are examined that were not taken away through the order established in the New Testament. The words of the man who took little care for the Sacrament of Confession show his personal responsibility for what happened; “He heard all his own sins, which he had committed from his youth on and had failed to confess or had forgotten or had not recognized as sins, crying out against him, each in its own voice, and accusing him grievously.” And here we do not see that by his own personal deeds a person can redeem his own personal sins: “The poor little virtues which I had displayed unworthily and imperfectly spoke out in my defense.”

And the expression, “The virtues, greatly magnified as they were, seemed to me far greater and more excellent than could ever have been practiced by my own strength” bear witness not that the angels magnified the fruits of the soul’s repentance, but to the contrary, spoke more about the intentions of the repentant souls than about the results of these intentions. That the soul itself could only repent, that he was talking about the slightly exaggerated virtues.

Next: The end of Conversation 2: The angels’ help in people’s lives and in the tollhouses, and the tollhouses in the lives of the Saints. Patristic Testimony on the Tollhouses: the Eastern Fathers
Conversation 2, Part 2
Archpriest Oleg Stenyayev
Those who have parted their bodies do not rise so easily to the heavens as the neo-Protestants and our own renovationists would have it. There is a good deal of testimony in the holy fathers about the aerial tollhouses. The Way of All Flesh: The Bible on the Aerial Tollhouses
Archpriest Oleg Stenyayev

The Way of All Flesh: The Bible on the Aerial Tollhouses
Conversation 2, Part 1
Archpriest Oleg Stenyayev
Where in the Bible do they talk about aerial tollhouses—those obstacles that the forces of darkness put in the way of souls rising after death to heaven through the space under heaven? Why do the demons wait for a soul in the under-heavens? How should we view the fact that there are differences between patristic works and the lives of the saints in explanations of the tollhouses? How can we answer critics of the teaching on the tollhouses? An interview with priest Andrew Phillips
Archpriest Andrew Phillips
The time of the martyrs has gone, for the moment, now is the time of the confessors. We need the common witness of both St John of Shanghai and St Luke of Simferopol, of St Jonah of Manchuria and St Sebastian of Karaganda, of Abbess Rufina (of Harbin) and the Elder John (Krestiankin), and all the saints and righteous of both sides. The saints unite us; people of this world disunite us. In the face of the threats of the contemporary, post-Christian world, we Orthodox Christians must stand together, sturdy spiritual warriors.
Comments

Svetlana1/23/2020 9:54 pm
Matushka Irene Matta, you do yourself and all those you are leading astray no favors in speaking against what multitudes of Saints discuss about the aerial toll houses. Please educate yourself instead of condemning innocent people.

Matushka J. Irene Matta MTh11/13/2016 7:35 am
Our poor Russian Orthodox brothers: please become re-acquainted with Holy Scriptures which include (St. Paul) references to our "warfare" HERE before our meeting with Christ Who is our Life as believers! "To be absent from the body is to be present with Christ"! Col. 2 Paul warns about worship of (fallen) angels and being caught up in hatred of the body with soul-destroying asceticism of the body. The Lord of Glory calls Satan the "father of lies"; indeed, lying is his nature. St. Isaac of Syria's letter to Symeon ( "Homilies" pg 445) warns him to avoid "fantasies of aerial judgments..(created by) keenwitted monks .." like the poor Seraphim Rose, whose writings are also replete with other new age fantasies.
Gnostic heresies are directly addressed by the Hieromartyr St. Irenaios of Lyons in "Against Heresies" which details the use of magical incantations used to pass through aerial toll-houses. God help His Church to be rid of these illnesses and return to His saving and Joyful Gospel which frees us from such fantasies! In Christ, Matushka Irene Matta MTh
×