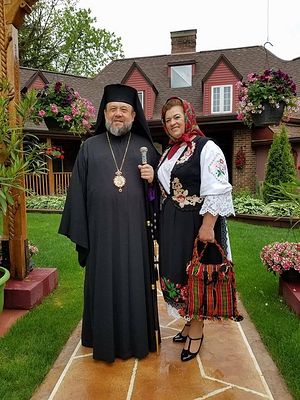 Former Bishop Irineu. Photo: Holy Ascension Monastery (Facebook)
Representatives of the Holy Ascension Monastery in Detroit, where former auxiliary bishop of the Romanian Episcopate of the Orthodox Church in America Monk Irineu (Duvlea) served as abbot, has returned its antimension to the diocesan offices and asked to be released from the jurisdiction of the Romanian Orthodox Episcopate of America.

As previously reported, Monk Irineu was deposed by a spiritual court held at St. Demetrius Orthodox Church in Jackson, MI, during the Holy Synod’s annual retreat, held this year June 19-23, and following a nearly two-year investigation by the Office for Review of Sexual Misconduct Allegations. Primate of the OCA, His Beatitude Metropolitan Tikhon (Mollard) addressed a letter to the Romanian Episcopate, published on the site of the Orthodox Church in America, explaining that former-Bishop Irineu was being returned to the rank of a simple monk.

Archbishop Nathaniel (Popp), ruling bishop of the Romanian Episcopate, released his own similar letter, dated June 29, explaining that “the accusations brought against Bishop Irineu were canonical infractions which required careful review, consideration, and discussion, based on canonical, disciplinary, hierarchical, moral and pastoral order,” and that all evidence was “verified by professionals competent in church and civil matters.”

The following day, Abp. Nathaniel released another letter, in which he informed the clergy of his diocese that the antimension of Holy Ascension Monastery had been returned by request of Monk Irineu on June 28 to the Chancery Office of the Episcopate.

A letter was also given to the archbishop in which the monastic community asks to be released from the jurisdiction of the Romanian Episcopate. The archbishop’s letter does not indicate if they mentioned which jurisdiction they hope to join. The letter was signed by Monk Irineu and Archdeacon Sebastian (Dumitrascu), as well as Hieromonk Firmilian (Palosan) and Brother Florin (Cretu), who, according to the bishop, are neither members of the monastic community nor canonical clergy of the diocese, and Mrs. Stefana Romanov of the monastery’s Board of Trustees.

In addition to returning his monastery’s antimension and asking to leave the Romanian Episcopate, Monk Irineu has also taken to social media to proclaim his supposed innocence. In a message posted on the Holy Ascension Monastery’s Facebook page, the deposed bishop writes that he received the Holy Synod’s decision with “great bitterness and stupor.” He claims that the investigation of his case was “sad and unfair.”

Justifying himself and attacking the Synod’s decision, Monk Irineu writes,

As before Christ, today I want to confess to the entire Romanian Orthodox Episcopate of America and to you all, when I say and affirm with full responsibility: the decision of the OCA Synod comes at the end of an unjust judgment with far too many irregularities and procedural vices assumed by those who have so wrongly decided on the obvious facts. I clearly understand the desire of those who for nearly two years have worked against me, priests and layman some of whom are even those who I have extended a hand and saved them from their situation here and from Romania to live a decent life in the American realm,

and further, “I AM INNOCENT!”

Stating that he cannot recognize the Holy Synod’s decision, the deposed bishop signs his letter as if he were still a bishop: “With Archpastoral Blessings, + Irineu, Bishop of the Orthodox Church,” again showing his rebellion against the Synod.

Further, a letter from Monk Irineu’s attorney Daniel P. Dalton has also been published on the monastery’s Facebook page, which argues that the case against the former bishop was a product of Abp. Nathaniel’s humiliation, frustration, and rage over former-Bishop Irineu’s popularity with the flock. “The hearing was clearly designed for you to fail,” the attorney writes, claiming that the Holy Synod ignored canon law. Furthermore, Dalton argues that three witnesses, former residents of the monastery, were unfit to testify as they themselves are sexual deviants.

Mr. Dalton’s letter concludes, “The OCA removal process was clearly a sham designed solely to remove you so that Nathanial [sic] can achieve his goal of having a diocese free of a Bishop more popular, honorable and holier than him,” and, misunderstanding that Monk Irineu was removed from the ranks of the episcopacy and not from the entire jurisdiction, he continues, “It was truly a miscarriage of justice to remove you from the OCA.”

Given Monk Irineu’s disobedience and unwillingness to accept the canonical decision of the Holy Synod, Abp. Nathaniel directs his clergy and faithful to refrain from visiting the monastery until the situation is resolved, and calls upon them to pray for himself, Monk Irineu, and for one another in this difficult time. OCA Romanian Episcopate bishop canonically deposed
The OCA primate closes his letter with an exhortation to prayer, “so as not to be overcome by divisive emotions, but rather seek to attain the peace of Christ,” and his own prayer: “May our merciful and loving God strengthen all of us to do His will in all things and preserve in our hearts the grace of the Holy Spirit, who is everywhere present and fills all things.”
Comments

Alexious Comnenis12/4/2021 2:14 am
I am little bit late with my remarks. I know very well ab. Nathaniel for many years. He was and is at his respectable 81 years a vicious person, who would use anything at hand to ostracize and to eradicate anyone who becomes a danger to him. He would collaborate with freemasons, who are present in every Romanian Orthodox parishes, to undermine a priest. As matter of fact he leads the 'deep church' existent for decades in the ROA, following the demise of the good Archbishop Valerian Trifa. I have never met his Grace Bishop Irineu, but I have doubts to believe the accusations raised against him. Without being judgmental, I can say without prejudice many priests of the ROA are not clean, some of them, due to their pro-Nathaniel loyalty were given ecclesiastic honors. The ROA needs a good down to earth hierarch who will ahem to talent and strength to bring this Romanian Diocese where it should have been. God be with Bishop Irineu.

ion Trandafir7/5/2017 5:00 am
I AM INNOCENT! Letter of clarification of His Grace Bishop Irineu on the decision of the OCA Synod and ROEA

To the Pious Venerable Monastic and Reverend Fathers,
Dear brothers and sisters in Christ the Lord,

I waited a few days for things to settle and create a little peace after unjust decision of the Synod of the Orthodox Church in America (OCA) and the Romanian Orthodox Episcopate of America (ROEA) on my abusive and unfounded criminality.
I also received with great bitterness and stupor the OCA and ROEA’s official release on the decision taken against me at the end of a so-called investigation that has also been subject to my suspension of my hierarchical ministry so far. Although the outcome of this research is so sad and unfair, although the investigation to which I was unjustly subjected was one that was obviously conducted from behind to lead to this result that we are facing today, I want to urge all of you to not lose your trust in JUSTICE!
And I am saying this to you, while thinking in these moments of restraint, only to the words of the Psalmist who say, “Rise up, O judge of the earth; repay to the proud what they deserve! How long O Lord, shall the wicked, how long shall the wicked exult? Until when they will say and will speak injustice” (Psalm 93:2-4)


Read the rest of the letter: www.salvareavetrei.org

What are you suggesting? Should the Church wait for the diriment word from a secular court about canonical matters?
Yeah, let's see if an atheist judge give us the permission to defrock a clergymen....
They hold every sin like a value to be defended strenuously, but don't mind..... noblesse, ehm, la dйmocratie oblige, parbleau!

About "Vladika", don't worry, we have just another Puhalo in the making.

Anthony7/4/2017 7:37 am
But was he found guilty. It's all good and well saying that the synod has examined documents etc etc but has he been convicted of dilly dallying in an American court of law. We all know that it is a common theme in America to make statements of opinion (lies/half truths etc) that are never backed up by facts eg Iraq has WMD, Syria used chemical weapons etc. to suit their agendas. Same thing here. If these American Orthodox are going to start defrocking clergy, then we need clarity as to why they have taken such actions. Something is clearly rotten in the state of Denmark or in this case America. Truly a great although not unexpected tragedy.

J.J. Kotalik7/4/2017 1:01 am
Spiritual courts are under a seal similar to that if confession; it is both uncanonical and sinful for the proceedings of a spiritual court to be made public by the Church and her clergy, as scandalous as that might seem to our democratic mindset.

Michael Dye7/3/2017 8:36 pm
Just what we need another independent defrocked "bishop" starting yet another diocese out of rebellion,well if no one takes him is he going too start his own diocese and start his own churches?The Old Catholics are bad enough now we have renagades like this,yuck.

Shakira Kinesia7/3/2017 7:07 pm
One of the things I object to in these and other proceedings, is that often, we are not told why. Why was he removed? If we knew why, a lot of speculation about the facts would be cleared up. If he screwed around with a woman in his parish, tell us. If he mishandled money and took a vacation to Rio, tell us. I would say that most of us would be forgiving and kind if we knew why. No one escapes sin in this life. I am not saying we need to name names of those involved in the sin, but Bishops and Metropolitans should be held to a higher standard and if they sin canonically and do not repent, we should know WHY they have been removed.
×