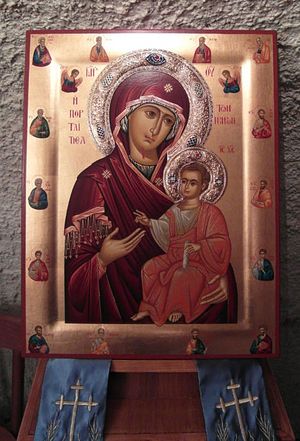 The first Greek Orthodox monastery in the Austria will be built in the village of Sankt Andra am Zicksee in the eastern state of Burgenland. This was announced by Metropolitan Arsenios of Austria and Hungary, according to Greek Reporter.

Though some area residents had reservations about the building of a monastery after Mayor Andreas Sattler called for its construction, the matter was put to a referendum in June, with 569 residents voting in favor of the monastery, and 385 against. The permit for the monastery was granted by the Roman Catholic Diocese of Burgenland and Austria.

Met. Arsenios had withdrawn his request for the monastery in a letter to the previous mayor before the referendum, noting that the negative reactions were offensive to the Greek Orthodox Church, though he believed “a Christian monastery would speak for itself.”

Following the June referendum, there had been new data on the construction of the monastery in Sankt Andre, although other locations in Austria had also shown interest in building it.

In a recent letter to Mayor Sattler and other community leaders, Met. Arsenios wrote, “I inform you that I am delighted to accept your request to build Austria’s first Orthodox monastery in the market town of Sankt Andrä am Zicksee.” The metropolitan’s letter was preceded by a letter from the mayor at the end of November, asking that the monastery be made a reality, according to the Austrian metropolis’ website.

The metropolitan also noted that he was deeply moved by the positive outcome of the referendum, expressing his gratitude for the “hospitality and generosity” of the people. He had received offers of help and resources from a number of political and public representatives, as well as from private individuals.

For Met. Arsenios, the monastery is “a visible sign of faith in the world” and “a reminder of the possibility of every human being to turn to God.” When Do Tourists Become Pilgrims?
Peter Davydov, Igumen Daniel (Irbits)
Igumen Daniel (Irbits), Abbot of the Monastery of St. George in G&#246;tschendorf (Germany), analyzes the characteristics of Christian pilgrimage, and when it has a good effect and when a harmful effect on the human soul. First Orthodox church in Bonn, Germany opens
Statistics show that more and more ethnic Germans have been converting to Orthodoxy in recent years. Italy is home to Russian Orthodox Church’s fastest growing foreign diocese
The head of the administration for Moscow Patriarchate churches abroad Bishop Anthony of Bogorodsk stated in a recent interview with TASS that the Russian Orthodox Church has nearly 900 parishes in foreign countries, the greatest number of which are in Germany and Italy.
Comments