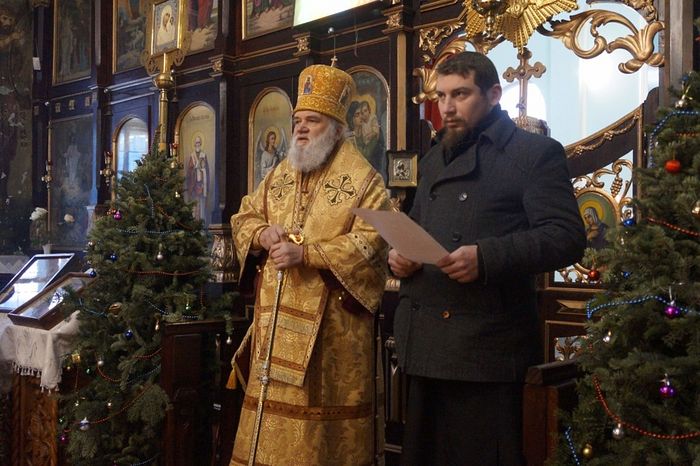 The Ukrainian Orthodox Church is rejoicing over the return to its fold of another schismatic priest. Anatoly Stanislavovich Vasilenko has offered his repentance for having been a member of the self-styled “Kiev Patriarchate” and returned to the true Church of Christ in Ukraine under the headship of His Beatitude Metropolitan Onuphry of Kiev and All Ukraine, reports the site of the Ovruch Diocese.

The former priest of the “Kiev Patriarchate” under the self-proclaimed “Patriarch” Philaret consciously, and with the majority of his parishioners, offered his repentance in the Church of the Holy Protection in Korosten, Ukraine, 98 miles northwest of Kiev, in the presence of diocesan administrator Metropolitan Vissarion of Ovruch and Korosten.

“I, Anatoly Stanislavovich Vasilenko, have realized the gravity of my sin of schism, being a ‘priest’ of the so-called church of the ‘Kiev Patriarchate,’” Fr. Anatoly writes in his letter of repentance, dated January 11. “I ask His Eminence to receive my sincere repentance. I want to be a humble servant in the Holy Church of God,” the former priest writes.

Vasilenko goes on to say that in reading a number of theological books, he became convicted that there is only one unified Church, and that he needed to join it. He notes that he was especially moved by Sts. Ignatius of Antioch, Cyprian of Carthage, and John Chrysostom. “Ukrainian Patriarchate” is a schismatic structure—Met. Hilarion
“We never speak about relations ‘between the two patriarchates,’ because we do not recognize the ‘Ukrainian Patriarchate.’ It is a schismatic structure; it was created by a person who is excommunicated from the Church,” notes the metropolitan. Offering the solution to the problem, the hierarch continued, “We see the path of healing the schism in those involved in the schism returning to the Church.”

Antiochian bishop: we support the canonical Church in Ukraine and pray that Philaret would come to reason
“This is all very regrettable—what has happened in Ukrainian Orthodoxy. We know about it. And especially regrettable is that the schism was perpetrated by a man who led the Church for many years, who in Communist times confronted various challenges. But in the end he himself struck a blow against his Church."
Comments