The “Kiev Patriarchate” could become basis for new religion, as it serves national interests, said Advienko. 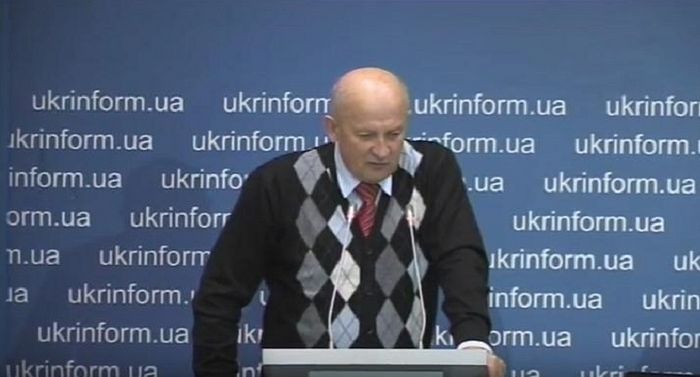 “We have a right to our own Christianity, unlike any Orthodoxy,” Andrei Advienko declared to thunderous applause during a press conference on Monday at the Ukrinform agency in Kiev.

Seeing Orthodoxy in terms of national interests, there is a movement in Ukraine that sees the Church as a servant of the Russian state, which the Ukrainian government has officially declared as an “aggressor state.” The Ukrainian parliament is considering two bills which would severely limit the activities of the Church, under the pretext that its administration is centered in this aggressor state.

At the recent Council of Bishops of the Russian Orthodox Church, it was clarified that, while the Ukrainian Orthodox Church is an autonomous part of the Moscow Patriarchate, its administrative center is actually in Kiev.

During his speech, public figure Advienko, one of the organizers, shared his belief that Ukraine needs its own unique national religion. “We have a right to our own Christianity, unlike any Orthodoxy,” he declared.

In his opinion, a possible “basis for this national, colorful religious question” could be the “Kiev Patriarchate,” which “is focused on national interests.”

The “Kiev Patriarchate” is self-declared, and not recognized by any Orthodox Church. It is headed by the self-styled “Patriarch” Philaret Denisenko, the former Moscow Patriarchate Metropolitan of Kiev, who schismed from the Church of Christ after he was not chosen as the patriarch of Russia in the early 1990s.

In Advienko’s opinion, this new religion should bear no resemblance to Orthodoxy: “I don’t know of a single country that professes Orthodoxy and is successful,” he emphasized.

The public figure’s speech was met by raucous applause. “Ukrainian Patriarchate” is a schismatic structure—Met. Hilarion
“We never speak about relations ‘between the two patriarchates,’ because we do not recognize the ‘Ukrainian Patriarchate.’ It is a schismatic structure; it was created by a person who is excommunicated from the Church,” notes the metropolitan. Offering the solution to the problem, the hierarch continued, “We see the path of healing the schism in those involved in the schism returning to the Church.” What’s happening in the Ukraine is a Tragedy for all
Interview with Metropolitan Nikoloz (Pachuashvili) of Akhalkalaki and Kumurdo
Metropolitan Nikoloz (Pachuashvili) of Akhalkalaki and Kumurdo
Can a physicist believe in God, how should a modern cinematographer be, why does the Lord allow wars and persecutions against Christians, and what experience can Georgia share with Russia and the Ukraine are questions discussed in an interview by RIA Novosti
Comments

Mar Melchizedek2/1/2018 9:39 pm
We hold good ecumenical contacts and friendly relations with all Christians. By virtue of our common baptism, we all belong to Christ's Church. Divisions are man-made because of our sinful, selfish nature. Whoever, therefore, opposes or even humiliates another Christian and his earthly affiliation, especially to exalt himself, violates the Holy Gospel and commits a grave sin. Thus, I cannot take the opinions of fanatics and internet propagandists on the subject of "canonical" seriously.

joseph dudan1/27/2018 9:22 am
It's one thing to be autocephalous. But it's quite a stretch to have a church focused only 'on national interests'. What kind of orthodox church would that be? Something concocted by the CIA is my guess..