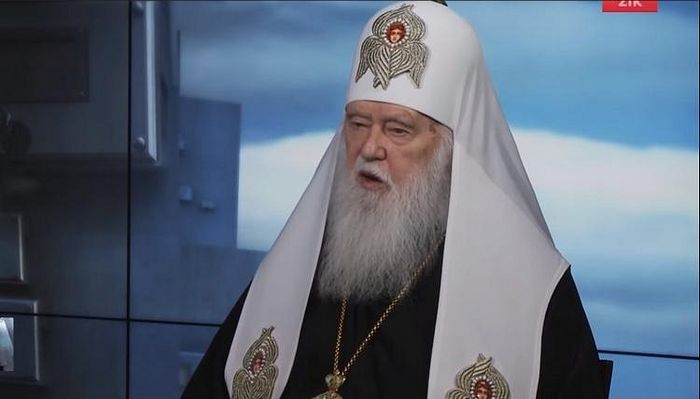 The head of the schismatic “Kiev Patriarchate” (KP) has declared that the canonical Ukrainian Orthodox Church is a “new” Church, and that the KP, in his person, is “the successor to the history of the Orthodox Church in Ukraine,” reports The Union of Orthodox Journalists.

The self-styled “Patriarch” Philaret spoke about this on the provocatively-titled program “Historical Truth with Vakhtan Kipiani: Orthodoxy in Service of the KGB” on the channel ZIK. Ukrainian nationalists and schismatics often try to justify their anti-Orthodox actions against true clergy and believers by slandering them as KGB-controlled Russian invaders.

In response, the false patriarch said, “The UOC-KP is not new, but on the contrary, it is a continuation of the history of the Orthodox Church in Ukraine.”

“The Ukrainian Orthodox church that Met. Vladimir headed is new, because it separated from the Ukrainian Orthodox Church. Who was the primate of the UOC in 1991? I was,” Philaret continued, showing his willingness to twist history to promote his schismatic congregation. “Who did the episcopacy of the UOC obey, the patriarch of Moscow or Metropolitan Philaret? Metropolitan Philaret.”

Contemplative Monks3/20/2018 11:49 pm
Before judging others or calling them names, learn about THE MEANING OF CANONICITY:
https://worldorthodoxdirectory.weebly.com/canonical.html

Anthony3/20/2018 9:39 pm
Are they all complete crackpots over there. Porky Poroshenko the neo nazi, Tshakashvili the war criminal, and pseudo-patriarch Phil the philanderer. Poor Ukraine.
×