The Promise of the Holy Spirit

A Homily for the Ascension of the Lord 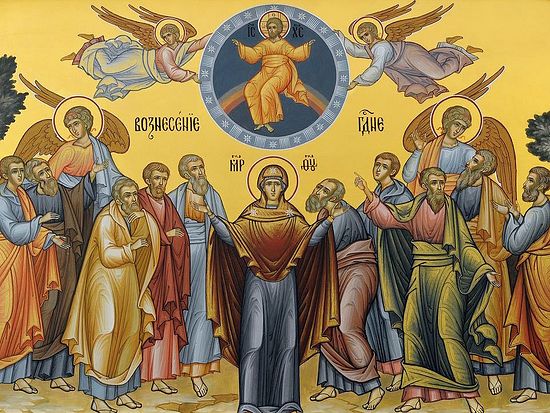 “Thou hast ascended in glory O Christ our God, granting joy to Thy disciples by the promise of the Holy Spirit. Through the blessing they were assured that Thou art the Son of God, the Redeemer of the world!”

By the Lord’s Ascension the forty days after His Resurrection ended, during which He appeared in the flesh to His disciples, witnessing the victory of life over death, showing His invincible, divine power. The Lord gathered His disciples in Jerusalem, led them out of the city, and having blessed them, began to ascend into Heaven (cf. Luke 24:50).

Seeing what was happening, the disciples rejoiced on the one hand, but on the other mourned this new parting with their Teacher. Only a slight shadow of this sorrow is conveyed in the Sacred Scriptures, but the Holy Fathers who composed the liturgical texts speak about it eloquently: The disciples even mourned and wept, being parted again from their Divine Teacher, with Whom now, after the Resurrection, they would have liked to remain forever.

This event is also reflected in the Acts of the Holy Apostles. As Christ was ascending, the disciples looked up to the heavens, and looked so long and ecstatically that angels appeared to them and said: “Why are you looking to Heaven?” in which could be heard some reproach: “Why are you standing looking up to Heaven? Do you really not believe that Christ will appear again, just as He has left you?” (cf. Acts 1:9-11). Thus, despite parting with their Teacher, the disciples returned with great joy and abided in the Temple, blessing the Lord (cf. Lk. 24:52-53).

What is the source of this joy? First, the Lord opens their minds before He ascends into Heaven: “Understand the Scriptures.” This was a special grace, which the disciples had not yet been granted. Their minds and hearts were opened in a special way to understand through Sacred Scripture what was happening in the world and in their lives—to understand the prophecies, to comprehend where, when, and how Divine grace appears, salvific for all of mankind.

They also receive the promise of the Holy Spirit, as we heard now in the troparion. The Lord promises to send them the Comforter, the Holy Spirit, about Whom He spoke several times during His earthly ministry. The Holy Spirit will descend upon the divine disciples and baptize them with Divine grace.

We often fall into despondency, into a certain doubt, the feeling that we have parted with Christ and He has departed from us. But the Divine grace of the Holy Spirit, promised by our Savior, is always present with us; it does not depart from us unless we lose this joy and hope that filled the apostles.

Everything is very wisely arranged in the Church, in the House of God, in His Body. Following Pascha, we celebrated for forty days, rejoicing in the victory of Life over death. The Lord has shown us the way out of hell by His Resurrection. And by His Ascension He shows us the path to Heaven, but in doing so gives us the commandment to remain in prayer, to not depart from the church of God, and to prepare ourselves to receive Divine grace.

Thus, together with the apostles today, we begin another path to the day of the Holy Trinity, to Pentecost, which continues for ten days.

It’s important that our life not lead us to church only occasionally, but that it would be entirely filled with the liturgical life, that our life would be inextricably linked with prayer and worship. Let us abide in joy, happiness, humility, and prayer, and let us prepare ourselves again and again to receive the Divine grace that our resurrected and ascended Lord Jesus Christ gives to us. From the Ascension of Our Lord to Pentecost

From the Ascension of Our Lord to Pentecost
The liturgical hymns for the Ascension of Christ are at no loss to interpret the meaning of this event for all creation: “The Lord ascended into heaven so that He could send the Comforter into the world.” “Set Your Affection On Things Above”
A Word on the Feast of the Ascension
Hieromartyr Thaddeus (Uspensky)
Let us follow along now mentally, brethren, with the sacred writers, depicting the path of our Lord Jesus Christ’s Ascension into Heaven, in the glory of His Father.

The Ascension of Our Lord
Hieromonk Seraphim (Rose)
Christ has been with us for forty days, and we have rightly feasted; we must now, being filled with the Holy Spirit of God, strive to spread His Gospel and be His witnesses before the world.
Comments