The Founders of the Orthodox West: On Recovering the Spiritual Identity of Western Europe

Who are the great historical figures of Western Europe who define its identity? The answers of the secular world to this question are quite different from those of the Church. The Western secular world exalts secular figures like Charlemagne, Charles V, or Napoleon as “great Europeans”. But all three of these left Europe full of graves. Indeed, Charlemagne and Charles V were renowned for their massacres and, as for Napoleon, he declared that he would have had Christ hanged as a fanatic.[1] 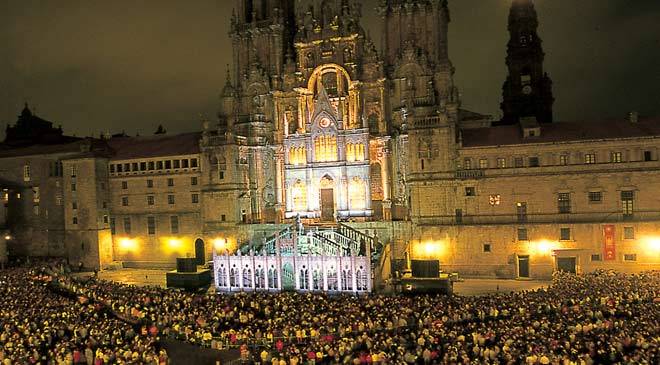 Crowd before an illuminated Santiago cathedral during the festivity of Saint James the Apostle. Santiago de Compostela, Photo: A Coruña,Turgalicia
The catalogues of the Church exclude all such tyrants, for the true identity of Western Europe is defined not by them, but by the thousands upon thousands of Western Saints. Here we have no space to mention the many amongst them who achieved only local fame, but we can at least mention some of the greatest, who obtained international honor.

First and foremost, the spiritual identity of Western Europe is closely linked to the Chiefs of the Holy Apostles, Peter († c.64) and Paul († c.65). Both came out of the East and were martyred in the West and the latter founded the first church in Western Europe, that in Rome. We also honor the memories of other Apostles and Apostolic figures, who are in other ways connected with the West. Among these is the Apostle James (†44), whose sacred relics have been honored in Compostella in Spanish Galicia for over a thousand years. Equally, we remember Apostolic men from the East, such as St. Ignatius of Antioch (c.107) and St. Justin Martyr (c.165), both martyred in Rome, and St. Irenaeus, († c.200), martyred in Pyons in France.

These Apostolic figures were to inspire countless others, who were to set out in later centuries as local Apostles, to enlighten the different regions and provinces of Western Europe. In the third and fourth centuries such saints established the Church in south-western Europe, in Italy, the Iberian Peninsula and Gaul, in the fifth and sixth centuries in the Celtic West, in the seventh century in England, and in the eighth to eleventh centuries in the Germanic north-west. 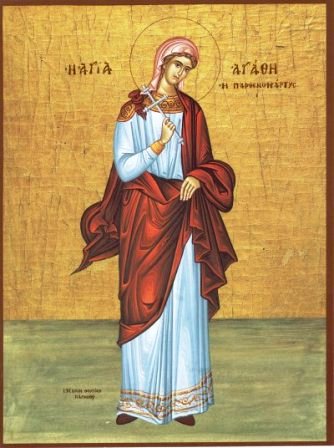 In other parts of the Empire there were others who also helped shape the spiritual identity of Europe. In Northwest Africa also there were many martyrs, for instance, St. Perpetua and St. Felicity († 203), and St. Cyprian of Carthage (# 258). In other parts of the West there were many other martyrs, still relatively little known outside their homelands, for example, St. Maurice of Agaunum in Switzerland († c.287), St. Eulalia of Merida († 304), St. Vincent of Spain († 304), St. Alban the Protomartyr of Britain († c.305), or St. Ursula in Germany (5th cent). 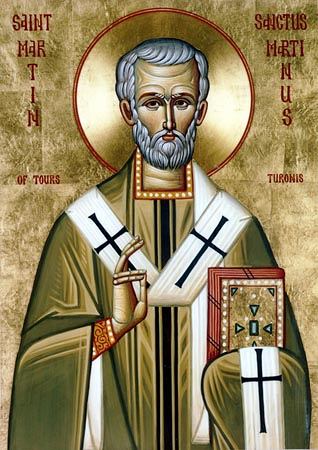 Here we should not overlook the role played by women. The Orthodox West had not only founders, but also foundresses, in many ways it owed its conversion more to holy women and princesses than to princes. The first here is not a princess, but certainly a princess of the spirit, St. Monica († 387), who outshone her son, Bishop Augustine, by her holiness. Then there are St. Genevieve of Paris († c.500), St. Clotilde († 545), St. Radegund († 587) and St. Bathilde († 680). Before them in Ireland there had already been St. Brigid († c.525), and after them in England came St. Audrey († 679) and St. Hilda († 680). Their activities in the West mirror the activities of other holy foundresses further east much later, for example, the Bohemian St. Ludmila († c.925) in the Czech Lands and the Swedish St. Olga (Helga) († 969) in Kiev. 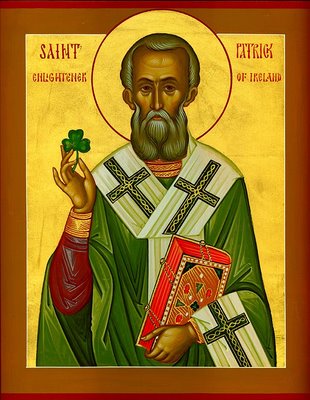 In the Isles the work of St. Patrick, mentioned above, was continued by the founder of monastic Ion a, St. Columba († 597). And his work in turn later inspired St. Aidan († 651) to found the monastic centre of Lindisfarne in the northeast of England. In the south of England there was the organizer St. Augustine of Canterbury († c.604). These all inspired kings and princes, for instance, St. Ethelbert († 616), St. Edwin († 633) and St. Oswald († 642). In the later seventh century the work of these figures was continued by the Greek St. Theodore of Canterbury († 690) and St. Cuthbert of Lindisfarne († 687). Their work was in its turn continued into the early eighth century by St. Guthlac of Crowland (†714) and St. Bede the Venerable († 735). The piety of the Isles had already overflowed into Western Europe with St. Columbanus († 615) and St. Gall († 630) in Switzerland. Their work was to be continued and organized in the eighth century by two English missionaries, St. Willibrord (Clement) in the Netherlands († 739) and the martyr St. Boniface (Winfrith) in the German Lands († 754). 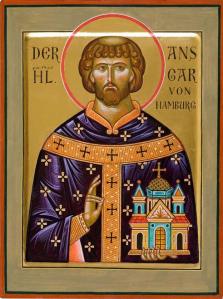 St. Anschar (Ansgar).
There were also later martyrs, particularly in the ninth century. Firstly, there were those under the Muslims in Spain, especially Cordoba, such as those recorded by St. Eulogius († 859). Then, especially in England, there were the many martyrs under the Danish Vikings, such as St. Edmund († 869). They were followed by later builders and restorers of the Church, workers of the eleventh hour. These include those in the Scandinavian Lands, such as St. Anschar (Oscar) († 865) in Denmark, St. Olaf († 1029) in Norway and St. Sigfrid († c.1045) in Sweden. As regards the martyrs of England, they laid the foundations for the later restorers of monastic life, such as St. Ethelwold († 984), St. Dunstan († 988) and St. Oswald († 992).

After a thousand-year-long apostasy and as, seemingly, we re-enter pagan times, there are those who consider that the Christian history of Western Europe is a thing of the past. This is a negative and fatalistic viewpoint. The spiritual identity of Western Europe is not beyond recovery. The final word in history has not yet been spoken. However, if Western Europe is to be recovered for Christ, this will only come to pass through the pure seeds of its Conversion, on the foundations laid by the above Great Europeans.

[1] The evil of Napoleon is reflected in that of Lenin who, in the twentieth century, desired to erect a statue in honor of Judas on Red Square in Moscow. Eventually, instead of this, a miserable tomb was erected to contain Lenin's own putrefied corpse.
See also An interview with priest Andrew Phillips
Archpriest Andrew Phillips
The time of the martyrs has gone, for the moment, now is the time of the confessors. We need the common witness of both St John of Shanghai and St Luke of Simferopol, of St Jonah of Manchuria and St Sebastian of Karaganda, of Abbess Rufina (of Harbin) and the Elder John (Krestiankin), and all the saints and righteous of both sides. The saints unite us; people of this world disunite us. In the face of the threats of the contemporary, post-Christian world, we Orthodox Christians must stand together, sturdy spiritual warriors.
Comments

question: if the west decayed after 1054, how come its just begann to flourish: at least the romanesque and gothic christian culture. Never yet surpassed until now, an architecture of pure light.

Linus7/24/2015 3:36 am
I see a lot of that orthodox hatred for the west, it's religion, culture, heritage & heroes in your post. That hatred that is stronger among the orthodox than the Muslims.

Yes there is a spiritual crisis, but Charlemagne is a hero & founder of Europe, in those days all Kings killed many & he killed mainly pagans cuz he believed Christendom couldn't be safe if they didn't convert. Charles V christianized the whole of South America & his son christianized the Phillipines.

Laurence Powers9/30/2013 4:09 am
Thank you for this informative and encouraging post. Please remember that Only Yeshua is the Advocate in the Heavenly Court, and, as such, only ask intercession from Him, none other...Yet to appreciate and express gratitude and have remembrance for the Saints/Confessors/Martyrs and a True lense of History is to be knowledgeable and apply such knowledge...Yes, remember all the Horrors inflicted from within and without...All strive to displace the sons and daughters of Adam...Practice the Law, wear the Orthodox Cross...Defend the Temple (bodies) of the Slavic/Celtic people with faith, reason, logic, and Uncompromising protection of the land, and bloodline...Once all Slav/Celts are practicing the Law with faith in Yeshua, then other tribes will begin to do so again..Until all tribes do so, and not until then, the bodies of Slavs/Celts are sacrosanct, and to be separated from the world...Be a Light to the World, and the World will generate its own lights within each respective tribe...Follow the Law, Follow the Messiah, Do Not Compromise...

James J.Read9/29/2013 12:24 pm
Whilst bearing the name James, I have difficulty with Compostella. The reputed relics of St James the Apostle were lost for 800 years according to the Compostella story. A star revealed that some sacred relics were buried in a field, in Spanish, Campo stella. The link with St James is thus very tenuous. Few Non-Spanish Catholics still accept the story.
×