Bishop Petru (Mustiata): “We Are Being Destroyed by Means of Their Non-Discrimination” 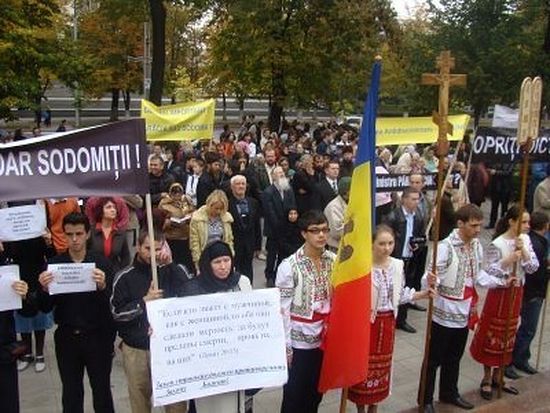 Moldova. Orthodox Christians are protesting against the law prohibiting all forms of discrimination


The passage of Moldova’s anti-discrimination law was one of the requirements laid down by the European Union for the visa liberalization with the EU (visa-free travel of Moldovan citizens within the EU). From the outset, the discussion of this law in the Moldovan Parliament was marked by members of the public expressing mass, stormy protest, as they associated it with the legalization of same-sex “marriage” and the adoption of children by homosexuals. Nevertheless, on May 25, 2012, the law was passed and on December 26 of the same year the Moldovan Parliament made changes in the penal code and the code of administrative offences that admeasured the penalties for discrimination: a fine up to 6,000 USD or up to six years of imprisonment. On January 1, 2013, the law came into effect. The socialists filed a protest to the Constitutional court of Moldova which, however, dismissed the complaint.

The Moldovan Orthodox Church of the Moscow Patriarchate has condemned this law as legalizing homosexuality and lechery and has given the Parliament a month for its repeal. Otherwise, the Church will excommunicate the deputies who voted for this act. Moldova is currently being shaken by protests, but so far they yield no results.

Below we publish the opinion of Bishop Petru (Peter) of Ungheni and Nisporeni on the present situation in Moldova.

The Diocese of Ungheni and Nisporeni has always supported and continues to support the Christian ideal of family, which consists of a father, a mother and children. The Orthodox Church teaches and instructs children and the youth to live in love for God and their parents, traditions and moral values. 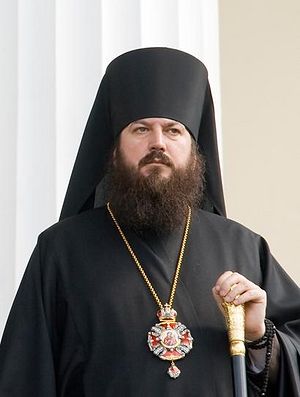 Bishop Petru (Mustiata)
I have been receiving many expressions of indignation and dissatisfaction from Christians regarding the wave of legal penalties (fines, imprisonments), which are applied by law for the so-called “discrimination” and “intolerance” against the bearers and propagandists of social vices.

These disturbances have broken out because of the establishment of the Council for Prevention and Elimination of Discrimination and Ensuring of Equal Opportunities—a “police” organ and a “bludgeon” in someone’s hands, constituted on the basis of the law no. 121 of 25.05.2012 for safeguarding “equal opportunities.”

This body will make the society “more sensitive” to the elimination of any forms of discrimination and propagating tolerance towards everything and everybody.

What are the main threats to the Church as a social and legal institution? The Church can be compared with a state. And what is a state like? A state is a group of people governed by the authority (a system of state bodies). A state is like a living organism.

If an individual is healthy, then the group to which he or she belongs is healthy as well; but if the individual is ill, then the team to which he or she belongs cannot work properly any longer. A man goes to the doctor to receive physical medical treatment; likewise the Church is a “hospital” for a sinner which cures his or her soul. If it were not for such a “therapy” the man would inevitably perish.

God created man in His own image but all human beings are different. Each person has his or her own characteristics.

Like loving parents who reproach their children, the Church is called to reprove its Christians with love, so that they might reform. If a dead and decaying organism is not buried, it will be a source of infections to other organisms which are living and healthy.

If we, the Church clergy, will persevere in our struggle with abortions (killing of babies in their mothers’ wombs) and contraceptive agents (poison), we will surely be accused of discrimination and intolerance by the supporters of these practices.

But what is tolerance? For the sake of clarity, let me give an example. If someone enters our house and without permission takes our things (furniture, dishes, food and so on), we must tolerate this and “recognize” that he is stealing all these things in defiance of our will—otherwise, criminal proceedings will be taken against us for intolerance.

If four of five colleagues in a collective are sound and one is an infectious disease (tuberculosis, cholera, etc.) carrier, then he or she must be isolated and provided with medical treatment. But, from the standpoint of non-discrimination, if the carrier of the infection does not wish to be isolated and put on medication, then he or she is regarded as a victim of discrimination, while his or her colleagues will be fined.

Tomorrow, or the day after this “non-discrimination” will abolish such Christian feasts as Pascha, the Nativity of Christ, the Dormition of the Mother of God and so on, because someone will feel discriminated against by the Lord’s festivals and will demand that all of them be replaced with other holidays, like March 8.

Family is a basic social unit. Let me demonstrate how family will be destroyed by means of “anti-discrimination.”

The first method is the abolition of the hierarchy in the family, that is, distorting and changing the roles of a man and a woman in the family. Today a woman is considered a victim of discrimination if she cannot take part in making decisions in the social and public sphere instead of the man. Therefore, already a woman, and not a man, is regarded as the breadwinner in the family. Thus, women, using the principle of “non-discrimination” as their basis, will not want to give birth to children, raise them, cook food, wash clothes and so forth. Nowadays these roles are twisted more and more often, and numerous feminist organizations have appeared which are promoting emancipation and, as a result of this, the number of divorces is increasing.

So, gradually, by means of these obviously destructive mechanisms, the interests of those who are aiming against what we call morals, decency, holiness and the rights of the majority are becoming a reality.

Know ye not that the unrighteous shall not inherit the Kingdom of God? Be not deceived: neither fornicators, nor idolaters, nor adulterers, nor effeminate, nor abusers of themselves with mankind (1 Cor. 6:9).

The Concepts of “Mother” and “Father” abolished in Moldova
As stated in the bill, the existing wording “mother (father)” is replaced by the wording “one of the parents.” Orthodox supporters of gay propaganda penalty thwart Moldovan parliament's meeting
The priests demanded that the amendments to the Moldovan Code of Administrative Offices, which abolished penalties for propaganda of homosexuality, pedophilia and sex outside of marriage, not be passed.
Comments

Elie 8/1/2021 10:21 pm
May God grant you our master Bishop, the European Union is a gang of evildoers and immoral people whose goal is to strike the Christian religion and its morals and destroy the family. Please, let no one think, even for a few seconds, that he would abandon his lofty principles in the hope of raising the economic level.God supports us with the loaf of bread that we ask for in every divine prayer and gives it to us..Orthodox Christian from Syria

Marcus Blut9/25/2015 11:06 pm
If the deputies do not relent, they MUST be excommunicated. This cannot be allowed to stand. SHAME these tools of satan!