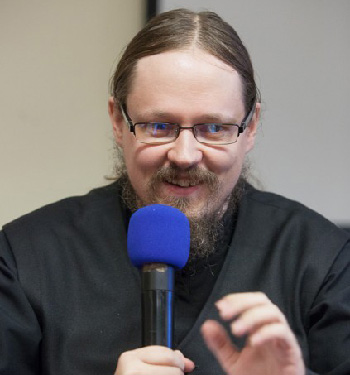 On April 19 a conference was held at St. Tikhon's University in Moscow on the topic "The Pan-Orthodox Council: Opinions and Expectations," in which participated numerous hierarchs, priests, and theologians, among them Fr. George Maximov, a well-known missionary priest in Moscow, who offered a presentation entitled "Misgivings regarding the upcoming pan-Orthodox Council." In his talk he addresses what he sees as some problematic theological points arising from the council documents, as well as problems with the council's procedural regulations:

Your Eminences, dear fathers and brothers,

I studied some of the draft documents of the council and would like, on one hand, to present as an example one of the problematic points there, and on the other hand to highlight the danger that arises from the peculiarities of the council’s approved regulations.

In the draft of the document, “The Mission of the Orthodox Church in Today's World”, the assertion that, “as in the old Adam was contained the entire human race, so in the New Adam is gathered the entire human race” is accompanied by a citation from Eusebius of Caesarea. Eusebius, as we know, is not only not a holy father of the Church, but is known to have had Arian sympathies. I think for all of us here it is obvious that to cite an Arian in an Orthodox document is nonsense.

The idea which they are trying to justify with the quote from Eusebius, is in and of itself, to put it mildly, suspect, insofar as it allows for such an understanding that the entire human race is already in some way gathered in Christ, the New Adam. But insofar as the entire human race does not belong to the Orthodox Church, it turns out that they are talking about some means of union with Christ other than the Church, and this union has already occurred for all men.

At this point there is also provided as vindication a quote from St. Cyril of Alexandria, but it is reproduced incorrectly, as the holy hierarch himself, as is obvious in context, further speaks about that the union of the entire human race with Christ occurs through participation in the mystery of the Eucharist. That is, it’s about the members of the Church. But in the draft the quote is given in truncated form, and there is the impression that he is speaking generally about the whole human race. Thus, in this document we have: a dubious idea, a link to a heretic, and an incorrect quote from a saint.

To delete or correct this point without any harm to the basic meaning of the document is not at all difficult. I can even suggest some specific edits for how to safely remove these heretical statements, or, we could say more softly, statements allowing for heretical understandings. However, when I had already prepared to write an appeal His Holiness the Patriarch on this account, with full confidence that His Holiness would not leave such problems unattended, it was pointed out to me that according to the regulations only those amendments which are supported by the representatives of all the Local Churches can be introduced into the text.

It turns out that even if such amendments were gathered as a result of today’s work and voiced by His Holiness at the Pan-Orthodox Council, they have very little chance of approval. After all, even if our amendments were supported by almost all the Local Churches, but only one did not support them, then, according to the regulations, the amendments would not be accepted. In my opinion this represents a great threat, all the moreso, because in previous presentations it was voiced that at the preparation phase for the council the representatives of the Patriarchate of Constantinople were rather unenthusiastic about the amendments of the delegation of the Russian Orthodox Church. It turns out that they have a method for blocking any amendments to the documents. The result is that there is a danger that these drafts, with their references to Arians and all the other problems that the previous speakers mentioned, will be accepted, because our amendments will not gain the consensus of all the representatives of the Church. I submit that it is worth it to give serious attention to this danger.

Further I would like to comment on the words of the previous presenter in which he expressed the thought that our diplomatic relationships with the non-Orthodox do not allow the use of the terms “heretic” or “heresy,” and on the basis of this postulated the inappropriateness of their use in the documents of the Pan-Orthodox Council.

We can agree that in the diplomatic sphere in the vast majority of situations the use of the words “heresy” and “heretic” maybe are inappropriate. But when this approach, which pertains to, as a matter of fact, the rather narrow and private sphere of ecclesiastical diplomacy, is transferred to the general sphere of our Orthodox understanding of who and what is heterodox, then it is incorrect. I have had occasion to hear from some Church officials of lower rank the opinion that now, generally, it is forbidden to say that Catholics are heretics, even for Orthodox in conversation with other Orthodox—not in an official message to the Pope or some high-ranking Catholic, but even, for example, in a book intended for Orthodox readers and for internal Church distribution. Many are sincerely persuaded that we are not in the right to use now these traditional, Patristic terms even in our personal documents, texts, and conversations. I do not think this is proper and correct. Such views have no theological basis and as they are contrary to patristic teachings should receive no dissemination.

So the observation that the document of the Pan-Orthodox council about attitudes towards the heterodox could stand to introduce the term “heresy” doesn’t seem at all to me ridiculous or preposterous. If these documents are first of all intended for an Orthodox reader, then it is perfectly natural to lean upon the theological tradition which was developed and became the standard in the Orthodox Church, firmly entrenched in her Tradition. If this text is a diplomatic letter addressed to non-Orthodox then it should have a different status and should hardly be entertained at a Pan-Orthodox Council, and it should be titled differently, for example: “A message to members of heterodox confessions” or something like that.

This is what I wanted to say about the problematic points. Thank you for your attention. Comments on the Joint Declaration with the Pope
Priest George Maximov
"On one hand, there are in the document not a few words with which we can agree. But for all of these, there are also expressions which are by no means indisputable, and sometimes erroneous."
Comments
×