Dispersing the dark cloud of the Passions

A discourse on the Mystery of Chrismation 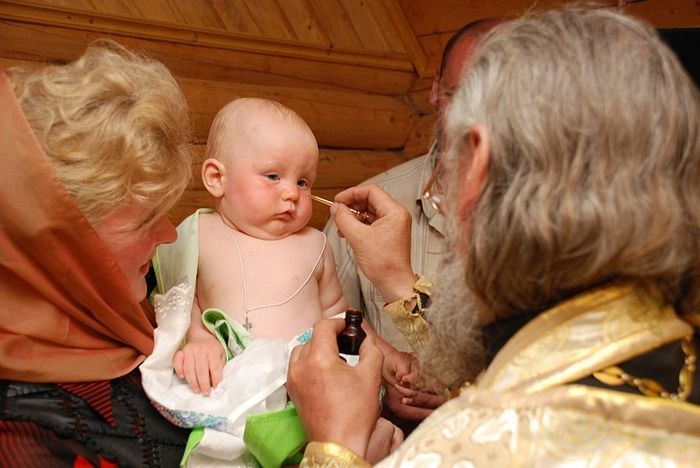 There is a beautiful Russian expression: “We’re all anointed with the same brush.” Although it sounds a little quaint, within it is hidden the deepest meaning.

Scarcely is the newly-baptized Christian vested in white garments—a symbol of purification and the forgiveness of sins received from the Lord God, scarcely has the priest laid a cross upon the chest of the baptized—his own personal weapon of combat—that forthwith, in modern Church practice, is performed his anointing with holy oil—with an oily fragrant liquid which is consecrated once every two years by His Holiness the Patriarch in the special rite of the sanctification of chrism—then to the new oil is added old, which comes to us in succession from the very Apostles.

What is said in Holy Scripture about Chrismation? Nothing. But we find there witness that all newly-baptized people received the gift of the Holy Spirit—only not through an anointing with oil, applied in cruciform on the forehead, eyes, ears, mouth, nostrils, chest, hands, and feet, but through the laying on of Apostolic hands. When there arose too many proselytes, and not enough baptizing apostles, then the consecration of oil was introduced, replacing the laying on of hands.

What is it that happens in Chrismation? Namely that which those knowledgeable in the Holy Scriptures read about in the book of the Acts of the Apostles. On the fiftieth day after the Resurrection of Christ the apostles were gathered on Mt. Sion, abiding in prayer and supplication, when of a sudden was heard a certain boisterous breathing, like unto a gust of wind, which onto the apostles descended and reposed as tongues of flame. It was a visible manifestation of the invisible Holy Spirit, energy which struck the apostles, so that they were filled with moral strength, necessary to them not only for the well-pleasing of God, but for the preaching of the Gospel (cf. Acts 2:1-4). 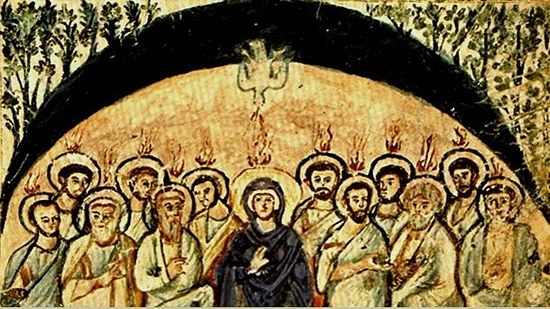 The Mystery of Chrismation is termed a Mystery because it is invisible to the eye. Notwithstanding, through the anointing with oil, although yet a tot, in him is accomplished miraculous changes. In his very heart, to the region of the immortal spirit adjoined to the conscience by the discernment of good and evil, and to literature by the gift of word—precisely there is planted the spark of the Divine—Divine energy which from that time is located in all of us and assists each of us every time that our will inclines towards the side of good. Man himself is weak and feeble, and in order to carry out good intentions we need an impetus from God. In this the baptized are distinguished from the unbaptized, that they have an especial energy of goodness, which perhaps can be likened to the sails on a Brigantine. Open the sails and a warm breeze fills them, having conveyed to the schooner a gradual motion. So you, baptized man—desire something good, and the Holy Spirit will assist you in its pursuance. As an example: “I want, from today, to quit smoking, to deliver myself from that stinking passion, which inflicts upon me physical suffering, and mental enfeeblement. Lord, this habit has strengthened due to my inattentiveness and carelessness. But forgive me and help me to change from the worse towards the better.” It’s as good as done.

Every baptized person should know and believe that the Holy Spirit assists him in his travails to change from the worse to the better. So they triumph with Divine help over enduring maladies: gluttony—a surfeit of food; irascibility—the unprovoked passion of anger, arising with or without cause; and despondency—grief that as a dark cloud descends upon a man and may deliver him into depression. The grace of the Holy Spirit is the same spark that disperses the dark cloud of the passions, if we try to turn to the Lord, if we supplicate His help, if we resist sin and we endeavor to not return to the sins we have confessed. Of course, saying this is quick and easy, but in reality it doesn’t always work like this: just speak, and it is already excised. However, the Mystery of Chrismation, celebrated over us, makes us as children and adopts us to the Heavenly Father. To this end Christ entered into this world, in order to, having suffered on the Cross and tasted the bitterness of death, vanquish it by His Resurrection and to send down to us the energy of the Holy Spirit.

We will note that through Chrismation we have found the heart—the organ of knowledge of and communion with God. The holy apostle of love John the Theologian in one of his epistles, addressing himself to Christians, says such amazing and interesting words: However, I have no need to teach you anything, because you have the anointing, and it teaches you all things (cf. 1 John 2:26-27). It means that if we sincerely repent of our sins, if we supplicate God to instruct and enlighten us, to strengthen us in the moral life, thanks to the Mystery of Chrismation the Lord immediately responds to our petition, and from within our very selves the Spirit of the Lord, intimately resting, effectuates the edification of the human soul. 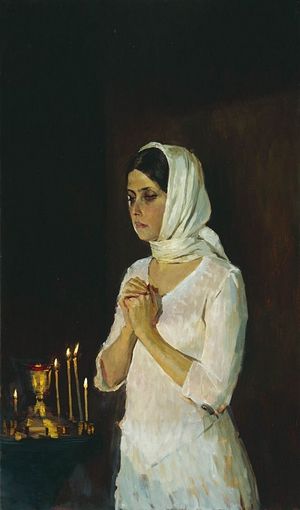 He who wants to ascertain the effectiveness of Chrismation, let him give a good confession of sins, and having received from the priest the prayer of absolution, having fulfilled the desire to live purely, grandly, gratefully, to stand simply in church as a child in simplicity and decency, he will begin to converse with the Heavenly Father. Only I advise you not to hurry anywhere. Give place to the Lord in your soul. I am convinced that many of those who hear me will confirm what I say. Half an hour later, the Christian, praying in the church, renouncing the worldly hustle and bustle, suddenly and surprisingly begins to comprehend, perceive, sense, and feel that from within his conscience he begins to carry on a dialogue with the Lord God as a youth, to converse with the Heavenly Father.

In short, by virtue of Chrismation the Holy Spirit guides us into all truth. He recalls for us the commandments, making our conscience very sensitive and vigilant. The grace of the Holy Spirit gives to man strength to contend with sin and not capitulate to the mercy of the conqueror, and not to yield to the evil that dominates in the world. The Mystery of Chrismation makes man a winged creature, born in Baptism not to crawl, but to fly. Therefore, if you want that the grace of the Holy Spirit not be given in vain, we must only clear away the dirt from the place of our heart, repent well and grant grace free reign. And what will we receive?

If we believe in Christ as the living God, and as children we wish to please the Heavenly Father, then, in conformity with the conscience and the commandments, little by little being strengthened by the Mystery of Communion, we will see after one, two, five, ten years grace-filled changes in our soul. A person who was yesterday inclined towards despondency and grief, bit by bit acquires vivacity, joy and life-creating energy. Having suffered from unchaste thoughts, for as an upperclassman he saw all kinds of filth on the computer, he will acquire chastity—that is, the ability to banish impure feelings. His heart will truly be the abode of the living God. Laziness and feebleness will be replaced by dedication and the competency to accomplish proposed objectives.

The Mystery of Chrismation makes us strong and able to conquer every sin. And therefore, recalling today this sacred rite, celebrated over us once, we will yet somewhat rein in ourselves by the Gospel words: Unto whomsoever much is given, of him shall be much required (Lk. 12:48). All of us at the Fearful Judgment, having appeared before the gaze of the Lord God, will, of course, submit a report—that spark of the Holy Spirit: hidden under a bushel, quenched and defiled; or, contrariwise, given the possibility to ignite within us, that over us during our earthly life would be fulfilled the word of Christ: “May your lamps be lit. You are sons of the Light, sons of the Kingdom. May your lamps so shine before men.” We are talking about the Mystery of Chrismation, about the grace of the Holy Spirit! Thereby, seeing your good words, seeing your irreproachable life, many strangers to the Church might glorify our Heavenly Father Who is in Heaven. Re-Sacramentalizing My Life
Rod Dreher
"Even if you are Catholic or Orthodox, if you are an American, you grew up in a nominalist, non-sacramental culture, and this has affected your Christian faith more than you probably realize. It’s true for me."

The Power of the Sacraments in the Lives of Orthodox Christians
Presented by Fr. Nikon of Mount Athos at the Academy of Aikaterini, Greece, 2014
He also saw a person in the large throng of people who was possessed of a demon. This demon manifested itself as a bird. The bird is very dangerous for him for he is not aware of it. He said the bird looked very smooth like velvet. And the astounding thing about this demon possessed person was that he was the same Zen teacher that Fr. Nikon had met in Thessaloniki. The thing that is of great interest to us here is that before the sacrament of baptism Angelo could not see these things clearly but immediately after his baptism he saw them without a problem. This is the marvelous meaning and power of the Sacrament of Baptism in the Orthodox Church.
Comments