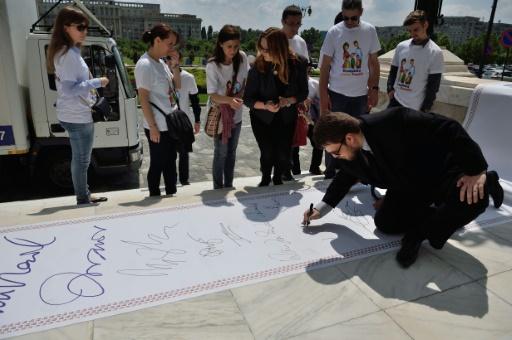 Romanian campaigners said Monday they had collected three million signatures on a petition to block same-sex unions in the EU member state.

Several groups linked to the Orthodox Church and united under the umbrella Coalition for Family are seeking a constitutional amendment to narrowly define marriage as the "union between a man and a woman".

It is the second such move in Europe this month after a group of mostly right-wing Italian politicians said they will push for a referendum to overturn the introduction of gay civil unions in their country.

"This is a historic moment," said Mihai Gheorghiu, one of the leaders of the Romanian initiative, which has been given strong backing by the Church.

"Three million Romanians, in an unprecedented show of solidarity, signed this proposed amendment."

The campaigners want parliament to change the wording of the current law which says marriage is a union between "partners", but they face strong opposition from gay rights groups.

"This initiative's only goal is to incite public opinion against LGBT people," countered Accept, a group that promotes the rights of the LGBT community.

This "offensive" is aimed at "further curtailing the rights of these minorities," Accept member Florin Buhuceanu told AFP, denouncing a "worrying erosion of Romanian democracy".

Parliament will have to verify that the petition accords with the law and if no irregularities are found, Romania will organise a referendum on the issue.

Rights groups including Accept and Amnesty International were able to stave off a similar proposed amendment in 2013.

Homosexuality in Romania was illegal until 2000, when the country decriminalised it after harsh criticism from the European Union and the Council of Europe. Romanian Orthodox priests gather signatures for Constitution amendment against same-sex marriages
Romania’s Orthodox Church wants to change the country’s Constitution so as not to allow same-sex marriages. The initiative was first launched by the Metropolitan of Banat Ioan Selejan, at the end of his Christmass Liturgy in Timisoara. Tens of people who went to the Theophany day service at the Metropolitan cathedral in Timisoara on January 6 queued to sign for this initiative, according to local media.
Comments
×