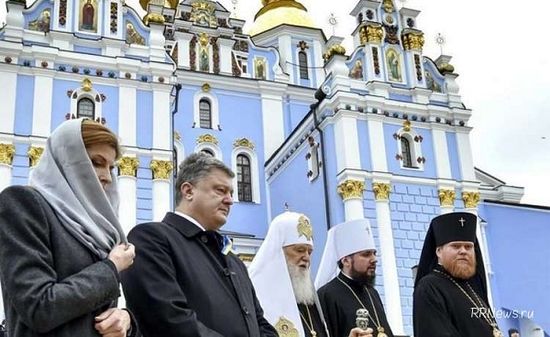 President of Ukraine Petro Poroshenko has stated that the creation of one local autocephalous Ukrainian Church in the country will not restrict the freedoms of the faithful and will not change the principles of interaction between the authorities and religious organizations, reports RIA-Novosti.

“According to opinion polls, the majority of Orthodox Ukrainian citizens want to have one local autocephalous Ukrainian Church. At the same time, I would like to assure that autocephaly by no means presupposes the formation of a sort of a state Church. No slightest detail will be changed in the constitutional principles of cooperation between the state and religious organizations. Freedom of conscience will not be restricted for anyone in any way; every single Ukrainian citizen has and will have the right to believe in God in his own way and to attend his own church,” P. Poroshenko said on Tuesday in his address to the Ukrainian Parliament during the opening of the fifth session of the Verkhovna Rada.

To date the following Orthodox religious organizations are active in Ukraine: the canonical Ukrainian Orthodox Church of the Moscow Patriarchate (UOC-MP) which is a self-governed Church within the Patriarchate of Moscow, along with two Church structures which are unrecognized by the Orthodox world – the so-called “Kyiv Patriarchate” and the “Ukrainian Autocephalous Orthodox Church." Patriarch Kirill congratulates Poroshenko on Independence Day, hopes for development of Church-state interaction
The patriarch said he is confident that "the peacemaking efforts of the canonical Ukrainian Orthodox Church will continue promoting the creation of civil peace and accord in society and the establishment of traditional moral values among people." Bulgarian Patriarch Asks Poroshenko to Protect Ukrainian Orthodox Believers From Persecutions
"We are seriously concerned with the numerous documented violations of the rights of the believers belonging to the only canonical Church in Ukraine. First of all, we refer to seizures of UOC churches by force," the patriarch said in his letter to Ukrainian president Pyotr Poroshenko, the UOC press service reported on Wednesday.
Comments
×