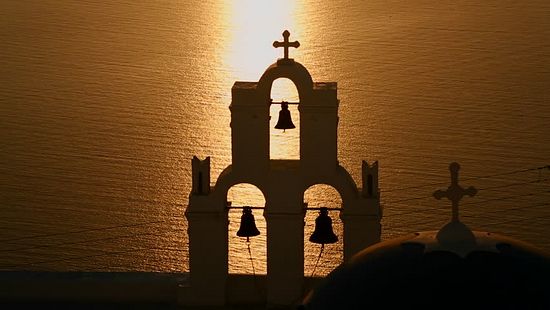 Clergy throughout the Kalavyrta Diocese of the Orthodox Church of Greece have taken to their bell towers to protest the newly-passed law “On the Legal Recognition of Gender Identity” which simplifies the process for legally changing one’s gender, allowing anyone 15 and older to make the change by written notification to the relevant authorities.

Under the direction of Metropolitan Ambrose of Kalavyrta, the bells began to mournfully ring out on Sunday, and will do so every day through Saturday at noon for three minutes, reports the Associated Press.

“It is an outrageous inspiration for someone to change his gender in a few minutes, with a simple declaration, so contrary to what God has gifted people with ... whoever has ‘gender dysphoria’ is mentally ill,” reads a statement from the Kalavryta Diocese.

The statement also condemns all forms of sexual deviancy, and expresses the worry that the current bill will serve as a gateway to homosexual couples being granted the legal right to adopt children. “We do not hate the sinner, but the sin,” the diocesan statement adds.

Before the final passing of the bill, Metropolitan Nicholas of Phthiotis expressed the same concern, saying, “Today they tell us that God did not create man and woman, driving the idea from the minds of our children. Every man can easily become a woman, and every woman a man. Do you know why they are doing this? They want to ensure, at any cost, that homosexuals will be able to adopt children.”

Protest banners will also be hung in the city of Aigion, the largest in the diocese.

The law passed on October 10, with 171 out of 300 parliamentarians voting in favor. Previously, candidates for a legal change of gender had to prove they had undergone a sex-change surgery and a psychiatric evaluation. The new law, which has dispensed with the need for any kind of medical evaluation, “instead of diminishing confusion and mental disorders, will increase them and give rise to a dangerous social phenomenon, especially when it creates an explosive situation in schools as well,” the Holy Synod of the Greek Orthodox Church wrote in a statement on October 5.

As can be expected, the new law has evoked a firestorm of harsh criticism from both Church and societal representatives. In addition, to the Holy Synod, and the aforementioned hierarchs, several other hierarchs, including Metropolitan Kosmas of Aetolia and the primate of the Greek Church himself, Archbishop Ieronymos of Athens, have spoken out.

Before the passing of the law, the Sacred Community of Mt. Athos sent a letter to the Ministers of Education and Justice of the Greek Republic, stating, “In connection with the proposed bill, we are engulfed by unease as to what the future is preparing for us. Is it really permissible in our Orthodox fatherland to legally and blatantly defy Divine law? So God created man in his own image, in the image of God created he him; male and female created he them (Gen. 1:27).”

“We ask all deputies and members of the government to ensure that such a law not be adopted. We propose that the best solution is to withdrawal the bill and send it back for revision.” While some parliamentary deputies did call for the body to heed the words of the hierarchs and Athonites, the majority, with Prime Minister Tsipras at the helm, decided to ignore the voice of the Church and the desire of the Greek people and to push the law through. Greek state: Children can legally change gender; Greek Church: We’re on the eve of Antichrist
In a move that has left many saddened and disgusted, Greek parliament voted yesterday to adopt the bill “On the Legal Recognition of Gender Identity” which allows anyone 15 years and older to legally change his gender, even without any medical examinations, simply by sending a letter to the relevant authorities. Mt. Athos officially opposes new bill on “free change of sex”
The Sacred Community of Mt. Athos has sent a letter to the Ministers of Education and Justice of the Greek Republic in connection with the scandalous new bill proposing to allow anyone 15 years or older to legally change his sex simply by letter.

Outrage in Greece over new sex-change bill
In accordance with the new draft law, it is enough to simply provide a written declaration in order to receive a legal change of gender.
Comments

Anthony 10/17/2017 6:40 am
The ever wonderful Constantinos Zalalas met Geron Efraim Philotheitis at his monastery in America in 2009 - this is what Geronda had to say about the godless Hellenes (speaking about RFID cards): ''we must speak to the faithful now and teach them to prefer a thousand martyrdoms than to sell their souls for a few Euro's; a few carob pods as the poor Greeks are now finding out. What the turks couldn't accomplish in 400 years, the carob pods of the EU did in less than 30. The average Greek today lives a life of idolatory and breathes the spirit of the antichrist. Watch the video, especially if you are ''addicted to western carobs'':