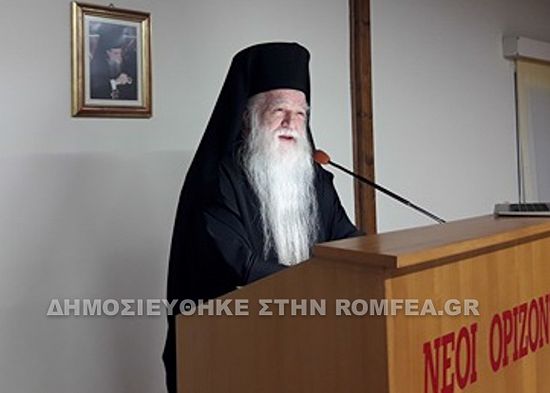 Metropolitan Ambrose of Kalavyrta recently offered a presentation as part of a cycle of Sunday afternoon talks established in his diocese to provide soul-profiting material to the pious of his churches. In his talk, His Eminence spoke of the spiritual dangers that come from departing from Christ, but also offered his audience a strong note of hope.

Commenting on the current state of the nation of Greece, Met. Ambrose noted, “Some have attempted to change Greece and to tear it from its 2,000-year tradition,” as AgionOros reports. “Not just to turn it into a godless state,” he continued, “but to make Sodom and Gomorrah out of it! They labor tirelessly to adopt in society the state of antichrist. All of these people have driven Christ out of their hearts and have given the devil the right to take up abode within them.”

The family used to be a place with a special climate, but it has become a hospital, where people live who are basically alien to one another. They used to teach about Christ and Greece in school, but now the religious education has become a godless subject, the hierarch lamented.

Beginning in third grade, school students will be told about the religious beliefs of Christians, Muslims, and Jews, without even clearly explaining what religion is, Metropolitan Chrysostomos of Symi recently stated. Moreover, in contrast to Orthodoxy, other world religions are presented in an ennobled and idealized sense.

“They have adopted disgusting laws, approving darkness and lawlessness. The authorities no longer have respect for the Church, but have declared war upon it,” Met. Ambrose continued.

The latest law to cause a scandal in Greek society is “On the Legal Recognition of Gender Identity,” which allows anyone 15 years and older to legally change their gender by way of written notification. The bells of the churches in Met. Ambrose’s diocese rang out mournfully for a week after the law was passed.

Modern man and modern society is steadily moving towards self-destruction, according to Met. Ambrose: “Our people are as if hypotized, but fearful demonic powers are active, infiltrating everywhere.” People used to go to church, and to wear and honor the holy Cross, and had icons and lampadas hanging in their homes, Met. Ambrose noted, so demons did not approach. “Now, because of human unbelief and separation from Christ, homes have become the habitations of demons. Modern man does not want to hear about God, and does not think about his soul and the afterlife. Unfortunately, there is much to suggest that mankind is headed for self-destruction.”

However, His Eminence expressed the conviction that even now, there is hope, as we always have Christ Himself with us, as long as we are not indifferent. “The fact that the world around us is perishing does not mean that we should be indifferent to it. On the contrary, we must be on the defense! We must protect our relics and our values. We must become confessors and martyrs for the faith.”

In conclusion, the metropolitan told the gathered crowd, “I want you to know that whoever lives with Christ is preserved, whatever happens!” and encouraging them to increase their spiritual endeavors, he continued, “Love God! Much more! Put Him in your heart and in your life! Begin to pray more than you have so far! Read more spiritual books. Learn to talk to Christ. Learn to confess more regularly.”

“Try to see the sweetness of God … when we fall in love with God, then we are transformed into men of God,” His Eminence finished. Abbot Gregory of Dochariou: Godless politicians must be prohibited from Mt. Athos
Archimandrite Gregory (Zumis), the abbot of Dochariou Monastery on Mt. Athos, has commented on the Greek government’s plans to legalize soft drugs and to allow the free cultivation of marijuana, saying “The devil has raised his banner high today.” Timothy Linnabary11/15/2017 7:45 pm
Though this article is about Greece, it could very well be about conditions here in America or any other country in the Western world. We are all clearly under demonic attack, and our political, corporate, and, sadly, many religious "leaders" are complicit in the attack. They are committing spiritual treason. We as Christians must be bold to return our countries to a more righteous state by standing against this evil by speaking out whenever we must. We must do it for generations yet to come. We must do it for the glory of God.
×