The Spiritual Ladder is Not Just For Monks

Homily on the Fourth Sunday of Great Lent 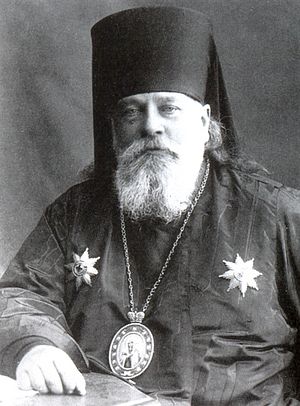 Metropolitan Seraphim (Chichagov)
The holy hieromartyr Metropolitan Seraphim (1856 – 1937), born Leonid Mikhailovich Chichagov, was a military man in the Tsarist army who after his experience of the horrors of war and his life-changing acquaintance with St. John of Kronstadt became a priest. After the death of his wife he entered the Holy Trinity-St. Sergius Lavra and was tonsured a monk. After service as the abbot of two different monasteries, then as the bishop of several successive dioceses, he was appointed Metropolitan of St. Petersburg. St. Seraphim was also an iconographer and writer, and is famous for his book, The Diveyevo Chronicles, a monumental work on the Life of St. Seraphim of Sarov and the creation and events of Diveyevo Monastery. This work contributed to St. Seraphim’s canonization.

St. Seraphim was executed for the faith by the communists at the Butovo firing range on 11 December 1937.

On this fourth Sunday of Great Lent, after the veneration of the Honorable and Life-Giving Cross the Holy Orthodox Church has established the commemoration of our venerable and God-bearing father John Climacus, the author who described the spiritual Ladder. But why is St. John the one who comes to mind, and not some other saint? It is so that during the course of the fast and our ascetic labors of prayer we would have before our eyes the example of a man who attained spiritual perfection, a great instructor, and so that we would not forget about the need for every Christian to study his God-inspired book, The Ladder of Divine Ascent, in which he portrayed all the Christian virtues in the stages that they should be instilled in a man in order to bring him to union with God and to force our own selves to correct our lives.

With the same goal, in order to break down in us the destructive feeling of self-pity, the Holy Church remembers on the fifth Sunday St. Mary of Egypt, who regardless of her many years of sinful life achieved spiritual perfection through zealous self-correction. In remembering these ascetics of piety, all our doubts about our own failings and weaknesses should involuntarily give way to the clear proof that with sincere faith in God’s word and through our own desire we can be made pure of body, heart, and mind, and even righteous and holy. If thou canst believe, all things are possible to him that believeth (Mk. 9:23) said our Lord Jesus Christ to the misfortunate father who asked Him to heal his demonically possessed son, about whom we read today in the Holy Gospel.

Very little is known about the life of St. John. As a chosen one of God, he loved the Lord from his earliest years; but none of his disciples mention anything about who his parents were or where he was born and raised. In their words, St. John was a man outstanding in his gifts, abilities, and education. At age sixteen he left the world for the monastery on Mt. Sinai, in order to live under the direction of experienced and God-inspired elders. In his Life it says that even then he was as if thousand years old according to his mind, and on Sinai he attained such perfection that he had a soul that was as if without reasoning and will, completely free and shining with heavenly simplicity. At the death of his instructor, yearning for yet greater ascetic labors, St. John resolved to place a vow of silence on himself, for which he chose a suitable place not far from the Church of the Lord, where he spent forty years. Fasting and prayer brought him to a high degree of purity and made him a vessel of God’s special gifts—clairvoyance, boldness in prayer, and the working of miracles. When the Sinai Monastery had to choose a new abbot, all the brothers unanimously asked St. John to return to his community. During his abbacy he wrote his book, The Spiritual Ladder, in which he portrayed the entire path to Christian perfection and how we must gradually perfect ourselves for our salvation.

Perhaps, beloved ones, some of you might suppose that St. John composed his Ladder exclusively for monks, and not for laypeople, inasmuch as there is nothing in common between your own lives—that is, of fathers and mothers of families and secular young people—and the lives of monks, recluses, desert dwellers and hesychasts? For that reason the Ladder is rarely read in the world and no one uses it to guide their secular lives.

Unfortunately many Christians think that way! However, beloved ones, did the Church establish this commemoration today of St. John Climacus only for monks and not for all Orthodox Christians? Could the Church’s rules be unfounded or erroneous? Although there is not much in common between the lives of secular people and that of monks, nevertheless all Christians msut ascend upon the same spiritual ladder to the Father’s House and under the same conditions. We all differ one from another by our outward appearance, vocations, status, and clothing, but God’s judgment demands that all who are ascending to the Kingdom of Heaven, to the habitations of the righteous and the saints, be like each other in their inner qualities, virtues, purity of soul, and righteousness. It follows that all Christians have one and the same goal: to achieve salvation, and to spiritually perfect themselves in order to achieve it.

From the monks is required: renunciation of the world, obedience or life not according to his own will, and silence, or the striving to be alone with God in his heart. But isn’t the same required of the layman? Let’s look at why a monk leaves for the monastery or the desert. It is order to avoid temptations, to be able to watch himself more easily, to war with his passions, to abide in prayer, and to learn to live a simple, austere life. But aren’t laypeople also obligated to set up their lives in such a way that they might avoid temptations, dangerous society, immoral spectacles, and empty talk; so that they could go to church, fulfill their prayer rule, and war with their passions? A lay Christian should also for the sake of his salvation renounce the destructive, corrupt world that is perishing in its pride, selfishness, greed, and obliviousness of God’s commandments. And whoever abandons the sinful life and struggles with his own passions does the same as the monk who has separated himself from the world and joined a monastery.

Why do monastic ascetics strive to acquire perfect obedience, and for that reason submit their will to the abbot, the elders, and instructors? Because otherwise it is impossible to learn to fulfill God’s commandments. But aren’t obedience and the fulfillment of God’s commandments just as obligatory for laypeople? In order to learn this, laypeople should submit their will to their own spiritual fathers.

Finally, should laypeople be hesychastic? Of course not, many would reply. But I am not talking about external hesychasm and silence—for monks also do work in their monasteries, fulfill various duties, and serve and help the laity; and that means that they are not silent. There exists another silence, which just as necessary for a monk as it is for the layman—it is the inner silence; that is, the striving to be alone with God in one’s heart. For this a person is immersed in himself, sorts out his own thoughts and actions, and abides in ceaseless prayer and remembrance of God. According to the words of the apostle, we all must ceaselessly behold Christ the Savior with the eyes of our hearts; that is, always—at home, on the street, in bed, during work and at play—and learn from Him humility, love, patience, and submission. Whoever lives this way is like the hesychast and desert dweller, although he remains in the world (as St. Theophan the Recluse wrote).

Thus, my beloved, each of us not only can, but must become emulators of St. John Climacus and study his divinely inspired book, The Ladder of Divine Ascent. This is necessary for our salvation, and that is why the Holy Church reminds us of it today. We only have to desire to work on this, because all is possible to those who believe! Amen! Homily on the Fourth Sunday of Great Lent. The Significance of Fasting in the Struggle against Fallen Spirits
St. Ignatius (Brianchaninov)

Homily on the Fourth Sunday of Great Lent. The Significance of Fasting in the Struggle against Fallen Spirits
St. Ignatius (Brianchaninov)
The Lord said to His Apostles about the evil spirits, This kind can come forth by nothing, but by prayer and fasting (Mk. 9:29). Here is a new aspect of fasting! Fasting is acceptable to God when it is preceded by the great virtue of mercy; fasting prepares a reward in heaven when it is foreign to hypocrisy and vainglory; fasting works when it is joined with another great virtue—prayer. How does it work? It not only tames the passions in the human body, but it enters into battle with the spirits of evil, and conquers them. The Fourth Sunday in Great Lent
Metropolitan Philaret (Voznesensky)
So it is also in the spiritual life. As a Christian gradually ascends, the force of spiritual and ascetical labours lifts him on high. Our Lord Jesus Christ said: "Strive to enter in through the narrow gate." That is, the Christian ought to be an ascetic. Not only the monastic, but every Christian. He must take pains for his soul and his life. On St. John Climacus, and the Miraculous Revelation of Patriarch Tikhon's Relics
Archimandrite John (Krestiankin)
The Patriarch was the spiritual leader of the Russian people during a very difficult time. He continues to be so during our difficult time in Russia—a time of schism, separation, and falls. The Church's duty in such trials is to inspire and unite the people for the sake of saving their native land, faith, and truth, serving for unification.
Comments
×