Help Thou My Unbelief! 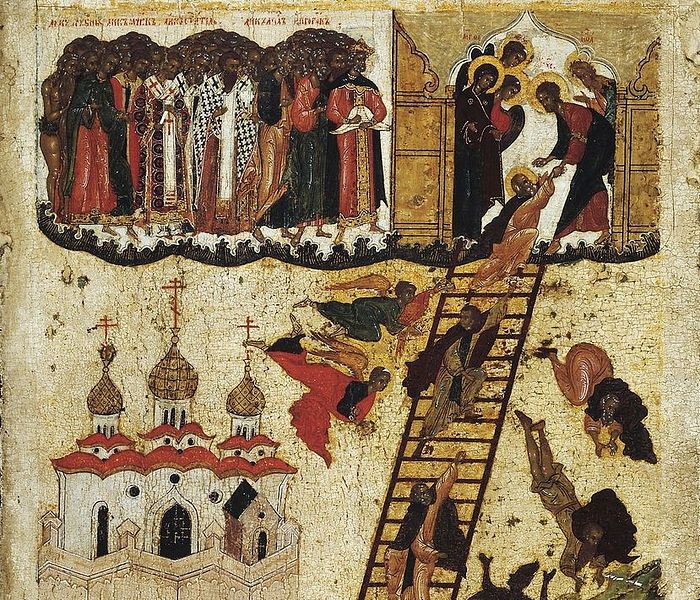 This past Sunday, the fourth Sunday of Great Lent, we celebrate the memory of St. John Climacus—a great ascetic who lived 1500 years before our time. He was the abbot of the ancient and glorious monastery on Mt. Sinai, where God spoke with the prophet Moses.

Having stepped upon the monastic path in his youth, St. John was the abbot of this monastery for only four years, having been appointed to lead the brothers only after forty years of eremitic ascetic labors, as a gray-haired elder. Both the beginning of his ascetic life and his appointment as abbot were accompanied by the special action of God’s grace and miraculous events.

The glorious spiritual instructor of that time, Abba Martyrius, took the still young John to see the great John the Sabbaite, who had arrived at that time to their locality. When he saw them the elder arose, poured some water into a vessel, washed John’s feet and kissed his hand. He did not wash Abba Martyrius’s feet, and when his disciple Stephan asked him why he behaved that way, the abba replied, “Believe me, son, I do not know who that boy is, but I have received the Abbot of Sinai and washed the abbot’s feet.”

On the day that Abba John became the abbot, the prophet and God-seer Moses served him. Six hundred visitors had gathered for the event and all had sat down to eat when John saw a man with short hair, dressed in the Judaic manner, who was walking here and there like a manager giving orders to the cooks, stewards, cellarers, and other servants. When the visitors dispersed and the servants sat down to table, they looked everywhere for the man who had given the orders but could find him nowhere. Then the slave of God Abba John said, “Let him alone; the master Moses did nothing strange by serving in his home.”

One of the fruits of St. John Climacus’s scholarly activities was the famous book, The Ladder of Divine Ascent, where he revealed the thirty steps of ascent along the ladder of spiritual perfection.

Anyone who has read the Ladder can justly marvel at the logic and loftiness presented in this work of spiritual instruction. In Russia this book was always read during the Church services throughout Great Lent.

In these thirty homilies of the Ladder the reader will learn how the passions and the virtues are connected with each other, what obstacles there are in the work of salvation, and what facilitates rapid spiritual progress. The Ladder immerses us into the depths of the ascetic science of sciences and art of arts—the active struggle with the “old man”, with the passions, with attacks from the spirits of evil under heaven; and it also shows how armed with discernment, with God’s help we can safely ascend in spiritual life from strength to strength, from virtue to virtue. Comparing the union of the three virtues of faith, hope, and love to the radiance of the sun, St. John calls them the height of perfection.

The Gospel story of the possessed child who was healed by the Savior, which we heard at the Divine Liturgy, rouses us to think about faith. Faith, in the words of Climacus, can do and create anything; it follows that without faith there is a risk of everything falling into wreck and ruin—vectors mainly related to the actions of fallen evil spirits.

And one of the multitude answered and said, Master, I have brought unto thee my son, which hath a dumb spirit; and wheresoever he taketh him, he teareth him: and he foameth, and gnasheth with his teeth, and pineth away: and I spake to thy disciples that they should cast him out; and they could not. He answereth him, and saith, O faithless and corrupt generation, how long shall I be with you? how long shall I suffer you? (Mk. 9:17–19).

[In the description of this event in the Gospel of Luke, the Lord says, O faithless and perverse generation, how long shall I be with you, and suffer you? ]

Before this, when He came to the disciples, the Lord saw many people, and the scribes arguing with them. The scribes and Pharisees stubbornly refused to believe in Jesus Christ as God and the Messiah. Neither the fulfillment in Christ of the ancient prophesies, nor the Savior’s miracles, nor even His most glorious resurrection changed their unbelief. To the contrary, all this only enflamed in them malice and envy. Pride, malice, and envy cut them off from the great goodness given to the human race—the gift of communion with God. This is also how the highest angel once fell from God.

Jesus said to the father of the demonically possessed child, If thou canst believe, all things are possible to him that believeth. And straightway the father of the child cried out, and said with tears, Lord, I believe; help thou mine unbelief (Mk. 9:23–24). 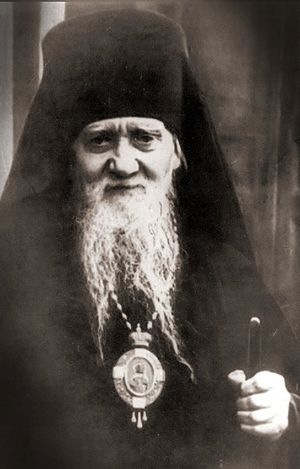 Holy Hieroconfessor Afanasy (Sakharov)
The confessor of the Russian Orthodox Church holy hierarch Afanasy (Sakharov), who lived for over thirty years in horrible sufferings and imprisonment in exile, showed that faith is first of all a gift of God, and that we, like the apostles, should ask for it in prayer:

And the apostles said unto the Lord, Increase our faith (Lk. 17:5).

And straightway the father of the child cried out, and said with tears, Lord, I believe; help thou mine unbelief.

Tears are the companions not only of joy and sorrow, but also of penitential feelings.

In order to receive the gift of faith, strengthening of faith, we must prepare ourselves with repentance, and stop being a perverse generation. This word “perverse” in the Gospel is shown in the Greek as diastrepho, which means not only “to pervert” but also to “turn upside down”, to distort, bring to disarray, to overturn.

In part the distorted understanding of one or another manifestation in our lives is rooted in man’s consciousness, in his spiritual state, and prevents him—like the scribes—from believing in the Gospel. People can become so perverted in their minds that they simply do not want God to exist—because God hinders them from living freely; that is, freely in the devil’s freedom, and not the freedom that the Spirit of God gives us. A huge group of people, whole nations and civilizations can also become a perverse generation. We learn this from Holy Scripture, and even from the reality of our present times, when because extremely abominable forms of sin have been raised to the level of a norm by powerful states with populations in the millions we are compelled to give this serious thought.

However the Lord, Who is perfect meekness and love, does not cut anyone off from the possibility of coming to Him, but meekly teaches, Behold, I stand at the door, and knock: if any man hear my voice, and open the door, I will come in to him, and will sup with him, and he with me (Rev. 3:20). These words of the Savior testify to the fact that God offers every man the gift of faith. But man is free to accept or reject this gift of God.

Faith based upon rational experience has little value; it is closer to our customary knowledge. Because thou hast seen me, thou hast believed, said the Lord to the apostle Thomas. Blessed are they that have not seen, and yet have believed (Jn. 20:29).

True faith is born from an inner urge; like a bird soaring in the heavenly heights it leads us ever higher upon the wings of fasting and prayer. The Savior Himself teaches us that we cannot be freed from the captivity of demonic influence in any other way than by these two virtues. This generation goeth out only by prayer and fasting.

The inner urge, filled with resolve, nourishes faith and can at times work miracles. Let us recall only the resolve of the woman of Canaan whose daughter was “grievously vexed with a devil”. O woman, great is thy faith. These are the Savior’s words. Be it unto thee even as thou wilt (Matt. 15:28).

Brothers and sisters, today the Gospel reading also contains edifying guidance in the problem of fathers and children. Without the work of repentance, without living faith, the tearful prayers of parents, no Sunday schools, religious courses, or formal church attendance can help in the upbringing of children. It is not without reason that they say that there are no problem children, only problem parents. And even if children have already left the enclosure of the Church, have directed their steps to a distant land, been taken captive by evil demons, remember the father of the misfortunate boy and call out to the Savior, cry to Him not with little faith but with the great faith of the Canaanite woman: I believe, O Lord! Help Thou my unbelief.

And let our faith be our inseparable companion, our guide, according to the words of St. John of the Ladder—our ray of light on the horizon.

A hundred years ago the remarkable Russian poet, Grand Prince Constantine Romanov wrote a poem wonderful in its power and expressiveness, dedicated to holy faith:

O faith, wondrous and consecrated,
Thou art a light-effulgent stream;
The soul’s door to paradisal habitations,
The life of future day’s first beam.
Burn in me, O faith, my lamp, and
Burn bright; O never die!
Ever be my sure companion,
And light my path to heav’n on high!

May the Lord grant all of us to complete the journey of Great Lent in the rays of the Light of Christ that enlightens all, with faith and love to reach the ocean of light—the feast of the Resurrection—not only here on earth in three weeks, but in the never-ending day of the Savior’s Kingdom. Amen. The Spiritual Ladder is Not Just For Monk
Met. Seraphim (Chichagov)

The Spiritual Ladder is Not Just For Monks
Homily on the Fourth Sunday of Great Lent
Holy Hieromartyr Seraphim (Chichagov)
Perhaps, beloved ones, some of you might suppose that St. John composed his Ladder exclusively for monks, and not for laypeople, inasmuch as there is nothing in common between your own lives—that is, of fathers and mothers of families and secular young people—and the lives of monks, recluses, desert dwellers and hesychasts? Why Do We Need The Ladder?
Answers from pastors

Why Do We Need The Ladder?
Answers from pastors
Anna Erakhtina
In our time, many laypeople ask the question: Why should people of the twenty-first century act according to rules written by monks and for monks in deep antiquity? Why should they read monastic books in which there isn’t even a remote mention of the problems that we face today?
Comments
×