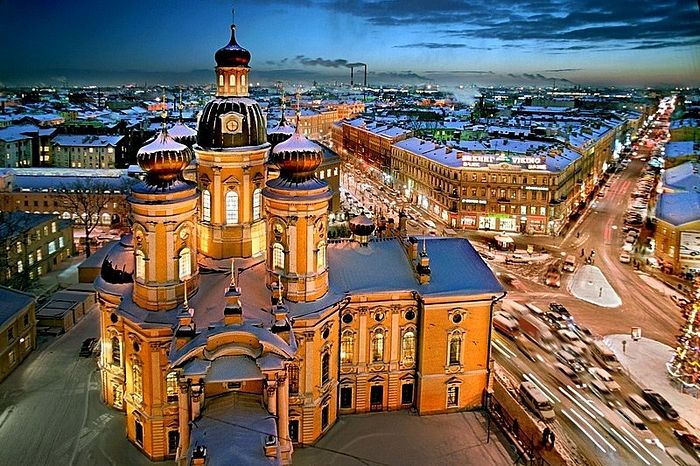 Completed in 1783, the beautiful and historic Vladimir Mother of God Cathedral is one of the oldest churches in St. Petersburg and presents a truly fascinating combination of baroque and classical architectural styles. The church is crowned with five onion-shaped cupolas, which rise into the sky above Vladimirskaya Ploschad in one of the most historic areas of the city. An impressive four-tiered bell tower stands adjacent to the church. The church is also home to one of the oldest and most elaborate iconostases in Russia.

The church was built to shelter the historic Vladimir Mother of God icon. The icon traveled to Jerusalem, Constantinople and then Kiev, where Prince Andrey Bogolyubskiy bought it and brought it to the ancient Russian city of Vladimir after which it is named. Subsequently the icon was credited by the Orthodox Church with freeing Moscow from the control of the Mongols.

The founding of the cathedral dates to 1746 in the house of a certain Yakimov where the first iconostasis was assembled. On August 25, 1748 a new wooden church was dedicated in the name of the Vladimir Mother of God. On the following day Empress Elizabeth attended a special church service in honour of the new church's opening.

Because the construction of the current stone church dragged on for more than 20 years and several different architects were involved in its design and construction, the cathedral is not credited to any one architect. 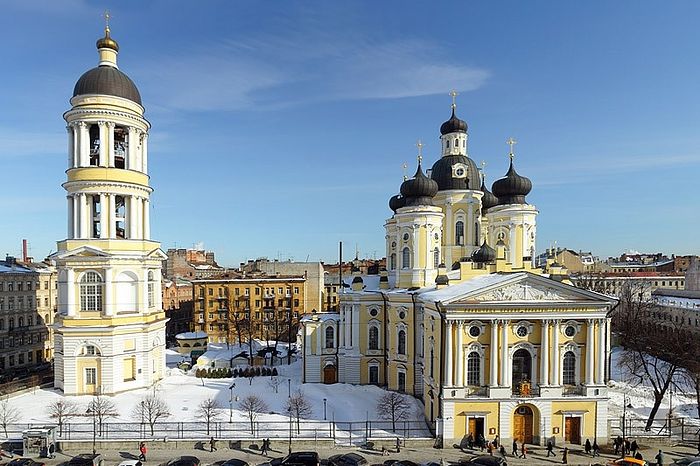 With its unique combination of baroque and classical features, the church is an important addition to St. Petersburg's architectural history. No other church in the city can claim a design quite like the Vladimir Mother of God Church, with its five different-sized onion-shaped cupolas rising into the sky and topped off with glistening Orthodox crosses, and including five sections, two stories and three porticos.

In 1831, a stone portico was added to the main building with two stairways leading to the second floor, designed by A. Melnikov. In 1833, another two-story portico was built on the northern and southern facades of the church including a two-story room for a staircase, designed by A. Golm. In 1848-1849 a fourth tier was added to the bell tower to a plan by architect F. Rusk. In 1850-1851 a fence was installed around the church, and two stone chapels were also added. The Vladimir Mother of God Church, bell tower and chapels were also gilded at this time.

The church was closed in 1932, the building was transferred to the State Public Library. The former church housed the department of anti-religious literature. During the years 1930-1940, it was one of the few places in Leningrad where one could read a copy of the Bible.

Although most of the church's treasures were looted during the Revolution, the incredible Baroque iconostasis (transferred from the Anichkov Palace chapel in 1808) on the church's upper level survived. It is one of only a very few of its kind in Russia is now an architectural monument and well worth seeing, and was created in the middle of the 18th century by Italian sculptor Bartolomeo Rastrelli.

The iconostasis was originally made for the chapel in the Anichkov Palace, but after changing the style of the palace's interiors, it was moved to the Vladimir Mother of God Cathedral. 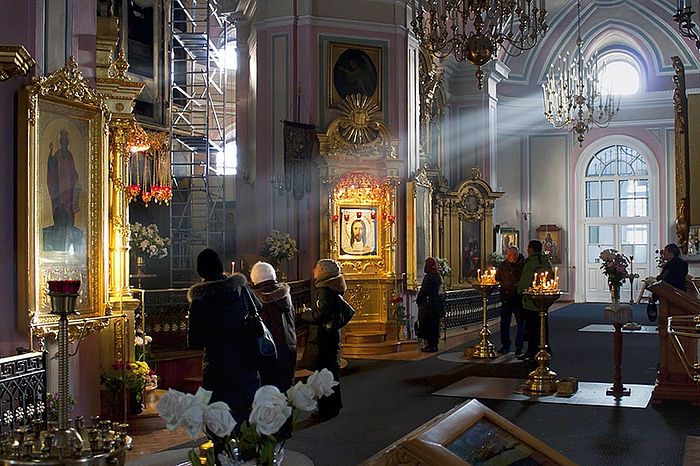 The Vladimir Mother of God Icon Cathedral is located in one of the favourite areas of the city's intelligentsia, and has had many notable parishioners, including Fyodor Dostoyevsky.

A vigorous restoration of the church began in the 1970s, including restoration of the facade and icons. Nevertheless, the effects of years of neglect have been difficult and slow to correct. In 1990, after the church had been returned to the Russian Orthodox Church, the first services where conducted in what observers described then as a gloomy and cold environment where there were only two icons donated by church parishioners. Moreover, the church did not have a cross for more than a year after it reopened.

In May 2000, the church received the status of cathedral. Today, a magnificent view of its domes and bell tower can be enjoyed from the 7th floor bar of the Hotel Dostoevsky, which is situtated directly across the street.

In 2006, after ten years of restoration, Rastrelli's masterpiece iconostasis was complete. Craftsmen updated the icons and frames and restored the lost fragments. The iconostasis is also unique in that it is two-sided—it is decorated with icons on the front and on the inside (the altar) side.

This church is part of the Beautiful Churches of Russia series on Royal Russia. Cathedral of the Annunciation in Voronezh
Paul Gilbert

Cathedral of the Annunciation in Voronezh
Paul Gilbert
The church takes its name from the eponymous Ukrainian Baroque cathedral that was built in 1718-35 in place of an earlier church commissioned by St. Mitrofan of Voronezh; it was destroyed by the Soviets in the 1950s. The existing bell tower echoes the one designed for the old cathedral built by Giacomo Quarenghi. The Vladimir Icon of the Mother of God
Commemorated May 21/June 3, June 23/July 6, August 26/September 8
The grateful Muscovites built the Sretensky Monastery on the site of the meeting of the miracle-working icon which took place on August 26, 1395, “That the great works of God may never be forgotten.” After remaining for 242 years near the Klyazma River, the Vladimir Icon of Theotokos was taken to Moscow and placed in the Kremlin Dormition Cathedral. Thanks to its grace-filled protection, Moscow was spared in 1408 from Khan Edigey, in 1451 from the Nogay prince, Mazovshi, and in 1459 from his father Khan Sedi-Ahmet.
Comments

MATEO MAYA5/7/2017 8:42 pm
Recently, I visited St Petersburg in was my first time in Russia, what a wonderful time I had, its churches, its people, my heart was stolen when I went to the Saviour on the spilled Blood, I thanks the Holy Father for giving me such a fantastic opportunity. I am writing icon painting and it would be great to take a course over there in a monastery in English..