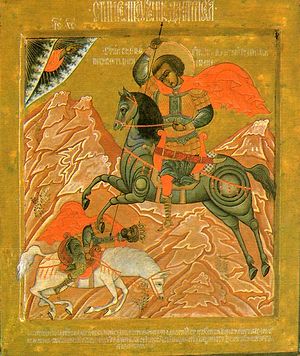 In the spiritual experience of the Russian Church, veneration of the holy Great Martyr Demetrios of Thessalonica is closely linked with the memory of the defense of the nation and Church by the Great Prince of Moscow, Demetrios of the Don (May 19).

St Demetrios of the Don smashed the military might of the Golden Horde at the Battle of Kulikovo Field on September 8, 1380 (the Feast of the Nativity of the Most Holy Theotokos), set between the Rivers Don and Nepryadva. The Battle of Kulikovo, for which the nation calls him Demetrios of the Don, became the first Russian national deed, rallying the spiritual power of the Russian nation around Moscow. The “Zadonschina,” an inspiring historic poem written by the priest Sophronius of Ryazem (1381), is devoted to this event.

The St Demetrios Memorial Saturday was established for the churchwide remembrance of the soldiers who fell in the Battle of Kulikovo. This memorial service was held for the first time at the Trinity-St Sergius monastery on October 20, 1380 by St Sergius of Radonezh, in the presence of Great Prince Demetrios of the Don . It is an annual remembrance of the heroes of the Battle of Kulikovo, among whom are the schemamonks Alexander (Peresvet) and Andrew (Oslyab).