And Unto the Angel of the Church of Russia Write…

For the Feast of the Apostle John the Theologian and St. Tikhon, Patriarch of Moscow 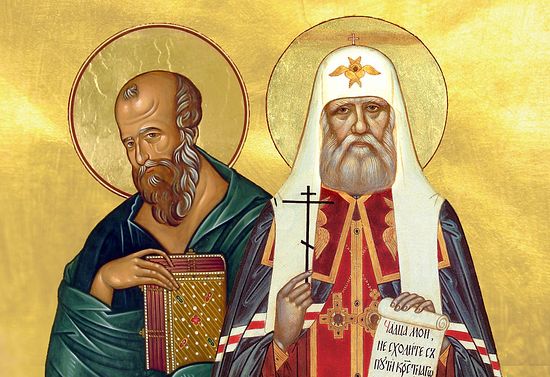 The apostle John the Theologian and St. Tikhon, Patriarch of Moscow and All Russia

When the apostle Peter had already established the Church of God in Rome by his testimony, and St. Paul had planted Churches all throughout the Mediterranean, when the disputes about circumcision and freedom had subsided, when nearly all the eyewitnesses, and ministers of the word (Lk. 1:2) had been killed, then were uttered the words of the apostle John:

I John, who also am your brother, and companion in tribulation, and in the kingdom and patience of Jesus Christ, was in the isle that is called Patmos, for the word of God, and for the testimony of Jesus Christ…

The apostle John is a generally mysterious personality. His Gospel is the most difficult to understand, the most “theological,” as if giving a bird’s-eye view on all the well-known events. How did he manage to reach this height? The Church explains to us that he tapped into “currents of theology” on the breast of Jesus. A man of delicate and sensitive soul, he loved the Master and began to intently peer into His inner world, and to listen to His words and the inner testimony of the Spirit in his heart.

The fruit of this attention to the Logos was the fourth Gospel. And then, at the end of his long life, ending almost together with the century, St. John was shown the fate of the Church in history…

Unto the angel of the church of Ephesus write… I know thy works, and thy labour, and thy patience… Nevertheless I have somewhat against thee, because thou hast left thy first love (Rev. 2:1,2,4).

We mustn’t think that what was written to a concrete community in the first century AD applies only to it. It is sent to every community and any Church, and moreover, to every Christian. This or that word, addressed to the seven churches of the Apocalypse, can apply to us at various moments in history and in our lives.

Reflecting upon the historical fates of the Russian Church, you cannot help but see a host of exact parallels with what was written in the first century by the apostle John.

And unto the angel of the church in Smyrna write… I know thy works, and tribulation, and poverty, (but thou art rich) and I know the blasphemy of them which say they are Jews, and are not, but are the synagogue of Satan. Fear none of those things which thou shalt suffer: behold, the devil shall cast some of you into prison, that ye may be tried; and ye shall have tribulation ten days: be thou faithful unto death, and I will give thee a crown of life (Rev. 2:8-10).

St. Tikhon, the Patriarch All Russia, was placed under arrest and put on trial. Perhaps he would have been glad to have experienced even more, so as not to be in any better a position than his fellow martyrs; but the Lord prepared a different crown for him: confession and prophecy.

His primatial ministry both began and ended with prophetic foresight. Having learned of his election to the patriarchate in 1918, Tikhon, metropolitan of Moscow, had this to say in response to the congratulations:

Your news of my election to the patriarchate is for me that scroll on which was written, lamentations, and mourning, and woe, which the prophet Ezekiel had to eat (Ezek. 2:10-3:1). How many tears must in I swallow and how much must I groan in my impending patriarchal ministry, and especially in these present difficult times!... From now on, the care of all the churches of Russia is laid upon me, and dying for them all my days awaits me. And who even among those stronger than I can have the strength for it? But may God’s will be done!

It was an eagle’s look into the future—as St. John the Theologian also beheld it. In a state of civil war and Bolshevik terror, no better words could apply to the patriarch-elect than those of Ezekiel:

On the threshold of death, the Patriarch said to his cell attendant, “Now I sleep. Long and deep. The night will be dark and long.” Between the beginning and end of his ministry, which ended for Patriarch Tikhon on April 7, 1925, on the feast of the Annunciation, were sleepless nights, prayers, unrest, and silent martyrdom.

And there was heard (albeit neither spoken nor written):

“And unto the angel of the Russian Church write: ‘I know thy works, and where thou dwellest, even where Satan's seat is: and thou holdest fast My name, and hast not denied My faith, even in those days wherein Tikhon was My faithful martyr, who was slain among you, where Satan dwelleth’” (cf. Rev. 2:13). All Russia’s Choice. Patriarch Tikhon is undisputably the head of the Church chosen by all the people
Mikhail Babkin

All Russia’s Choice. Patriarch Tikhon is undisputably the head of the Church chosen by all the people
Mikhail Babkin
Besides the elected members at the Local Council, present were all members of the Holy Synod, all diocesan bishops, the abbots of all four Lavras, the abbot of Solovki, Valaam, Sarov, and Optina Monasteries, members of the Pre-Council council, and two archpriests: of the Dormition Cathedral in the Moscow Kremlin and the of the army and navy clergy.

Saint John the Theologian Preacher of Divine Love
His zeal for the salvation of those who were perishing knew no obstacles. And the meekness, humility, and kindness of this great apostle were so amazing and touching, that he seemed to be not a man but an angel incarnate. His entire life was a life of love.
Comments

But I have a few things against thee, because thou hast there them that hold the doctrine of the beast, who taught Sergius to cast a stumbling block before the children of Israel, to despise the blood of the martyrs, and to slander My confessors.

So hast thou also them that hold the doctrine of the Sergianites, which thing I hate.

Repent; or else I will come unto thee quickly, and will fight against them with the sword of my mouth. (cfr. Rev 2, 14-16)