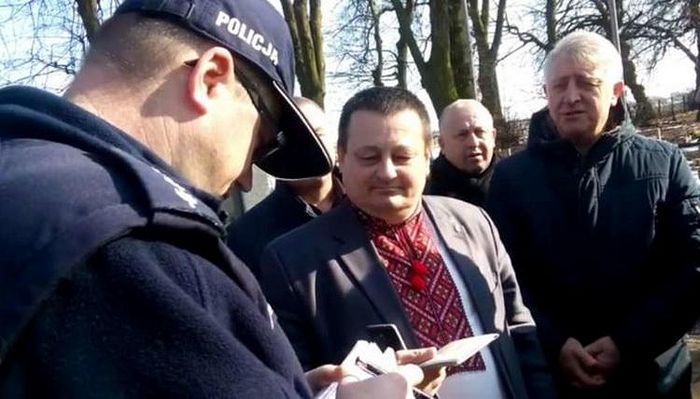 In yet another provocation against canonical Orthodox believers, Ukrainian nationalist schismatics recently disrupted a memorial service being served at a cemetery by priests of the Polish Orthodox Church, reports Volyn 24.

The memorial panikhida was being served for the hundreds of Ukrainians who were murdered in the village by Poles on March 10, 1944. The Ukrainian nationalist-schismatics accused the Polish priests of being Moscow sympathizers and forced them to leave the cemetery.

The scandal occurred on March 10 at a cemetery in the eastern Poland village of Sahryń when a representative of the schismatic “Kiev Patriarchate,” “Metropolitan” Michael Zinkevich, offered to concelebrate the panikhida with the priests of the canonical Polish Orthodox Church.

The priests refused, stating they could not serve with schismatics.

An annoyed Alexander Pirozhik, the Deputy Chairman of the Volyn branch of the nationalist group “Svoboda” and the First Deputy Chairman of the Regional Council, who brought the “metropolitan” with him, called the Polish priests, “Pro-Moscow priests,” who “twitched and fidgeted like those sinners for whom oil was poured on the fire.” He further explained the priests’ refusal to serve with schismatics as their unwillingness to hear prayers read in Ukrainian.

“Svoboda” is well known for continually harassing and persecuting priests and parishioners of the canonical Ukrainian Orthodox Church.

Having heard mention of the Ukrainian Nazi war criminal Stephen Bandera and the Ukrainian Insurgent Army, someone at the cemetery called the police, as “Bandera ideology” was recently made illegal in Poland. The police arrived and recorded the violation. Pirozhik stated, “I am a follower of Bandera, and I’m proud of it.”