On the Saturday of the first week of Great Lent, we commemorate an event which occurred in the year 356—a miracle of Great Martyr Theodore the Tyro ("the Recruit"), which continues to have great significance for Orthodox Christians even today, perhaps especially today.

Fifty years after the death of St Theodore, the emperor Julian the Apostate (361-363), wanting to commit an outrage upon the Christians, commanded the city-commander of Constantinople during the first week of Great Lent to sprinkle all the food provisions in the marketplaces with the blood offered to idols. St Theodore appeared in a dream to Archbishop Eudoxius, ordering him to inform all the Christians that no one should buy anything at the marketplaces, but rather to eat cooked wheat with honey (koliva). 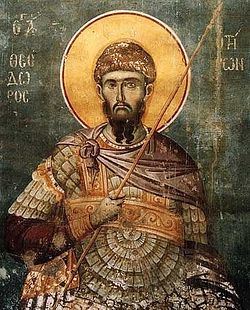 St. Theodore the Tyro The Holy Great Martyr Theodore the Recruit (Tyro) was a soldier in the city of Alasium of the Pontine district (northeast province of Asia Minor, stretching along the coast of the Euxine, i.e. the Black Sea), under the command of a certain Brincus. They commanded him to offer sacrifice to idols. St Theodore firmly confessed his faith in Christ the Savior in a loud voice. The commander gave him several days to think it over, during which time St Theodore prayed.

They charged him with setting a pagan temple on fire, and threw him into prison to be starved to death. The Lord Jesus Christ appeared to him there, comforting and encouraging him. Brought to the governor, St Theodore boldly and fearlessly confessed his faith, for which he was subjected to new torments and condemned to burning. The martyr Theodore climbed onto the fire without hesitation, and with prayer and gave up his holy soul to God.


This occurred in about the year 306 under the Roman emperor Galerius (305-311). Unharmed by the fire, the body of St Theodore was buried in the city of Euchaita, not far from Amasium. His relics were afterwards transferred to Constantinople, to a church dedicated to him. His head is in Italy, in the city of Gaeto.

From: Official Website of the Orthodox Church in America

Koliva is also prepared in the Orthodox Church for services to commemorate the dead, especially in the Greek tradition. It carries an important symbolism of the resurrection of the dead, and a foretaste of Pascha.

Koliva: A Symbol of The Resurrection of the Dead

Blessed art Thou, O Lord, teach me Thy statutes. Give rest, O God, to Thy departed servants and place them in Paradise, where the choirs of the saints and the just, O Lord, shine like stars. Give rest to Thy servants who have fallen asleep, overlooking all of their transgressions. 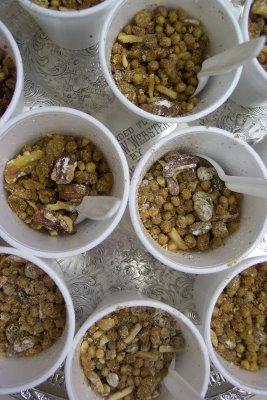 Koliva in cups for distribution to the faithful at the Saturday service. Christ said, "Unless a wheat grain falls into the earth and dies, it remains alone; but if it dies, it bears much fruit." (John 12:24)

When planted, the wheat is buried in the soil, but when the season is right, a new plant will grow. So we believe that the Christian will be raised in a new body in the resurrection. Wheat symbolizes the eternal cycle. People like wheat, must be buried to grow and have new life.

Q. What is in Koliva?

A. It is boiled kernels of wheat mixed with dried fruit and nuts. It also can be sweetened with sugar and spices, and covered with powdered sugar to resemble a tomb or grave.

Q. When is it prepared?

A. Preparation begins one day before the scheduled memorial service. Most services are at the end of the Sunday liturgy. Therefore, the wheat needs to be boiled and set to dry on Saturday evening. Invite your family and friends to gather and assemble the other ingredients; share stories and complete the preparation of the Koliva.

Q. Why is it important that we remember those who have fallen asleep?

A. It is important to remember and pray for those who have passed on, to keep their memory alive and to help us heal. As Orthodox Christians, we believe that intercessions on behalf of the dead are possible through the fervent prayers of those remaining on earth (see Matthew 25). We are a church made up of both the living and the dead.

A. The fortieth day after the death of a loved one and the first anniversary of the death are the most commonly observed memorials. Memorials may also be observed on the third, sixth, and ninth months as well as the yearly anniversary. The departed may also be remembered during the scheduled Soul Saturdays throughout the church calendar.

But I do not want you to be ignorant, brethren, concerning those who have fallen asleep, lest you sorrow as others who have no hope. For if we believe that Jesus died and rose again, even so God will bring with Him those who sleep in Jesus. For this we say to you by the work of the Lord, that we who are alive and remain until the coming of the Lord will by no means precede those who are asleep. For the Lord Himself will descend from heaven with a shout, with the voice of an archangel, and with the trumpet of God. And the dead in Christ will rise first. Then we who are alive and remain shall be caught up together with them in the clouds to meet the Lord in the air. And thus we shall always be with the Lord. Therefore comfort one another with these words (1 Thessalonians 4:13-17).

1lb. Whole Wheat Berries (hulled/shelled is preferred but not a necessity) [In the Russian Church, boiled rice is also used.]

Optional ingredients (These should reflect your family’s preferences and heritage and you may use any or all of the ingredients):

Preparation of the wheat (The night before or at least 6 hours before memorial) [The Greek tradition makes a slightly more ornate koliva than the Russian]: 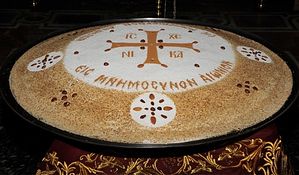 Rinse wheat well in colander with cold running water. Place in large stainless steel pot. Fill with water within 3 inches from the top and bring to a gentle boil Stir frequently for 45 minutes to 1 hour (the wheat berries should be "al dente" or chewy but not too soft). Drain-off water and rinse boiled wheat in the colander. Allow to drain in colander for about 1 1/2 hours Toss gently the boiled wheat with rubber spatula to loosen. Prepare a 12 X 17 inch pan lined with clean cotton pillow-case or dish towel. Pour the wheat into pan. Spread the boiled wheat to cover pan and allow drying out 6 to 8 hours or overnight

To assemble for church:

Place the following in a large bowl for gentle mixing:

Cooked wheat, walnuts, or your choice of optional add-ins. Gently combine. Line display platter or bowl with paper doily and top with plastic food wrap. Pour koliva mixture onto the platter or bowl and pack down to make firm mound. Sprinkle lightly the cinnamon and powder vanilla on the koliva mound. Sprinkle ground crackers on top of the cinnamon and continue packing. Top with sifted confectionery sugar. Place plastic wrap over mound and pat gently since (this makes packing rather uniform). Repeat and add another layer of sifted confectionery sugar. Decorate with Jordan almonds on the top in the sign of the Cross. On the top right quadrant, place the Greek letter "A" (Alpha means: Christ is the beginning). On the top left quadrant, place the Greek letter "W" (Omega means: Christ the end). On the bottom right quadrant, place the deceased first initial. On the bottom left quadrant, place the deceased last initial. Finally, a candle should be placed in the center of the mound and then presented to the memorial table at church.

For Thou, O Christ our God, art the resurrection, the life and the repose of your departed servants, who have fallen asleep and Thee do we glorify together with Thy eternal Father and Thine all-holy, good and life-giving Spirit, now and forever and to the ages of ages. Amen Friday of the First Week of Great Lent

Friday of the First Week of Great Lent
When we loved sin, these sins were living boughs on the tree of our life and they fed from it. When we turned away from them, became disgusted with them, repented and confessed, we thereby severed them from ourselves. At the moment of absolution they fell away from us. Now they are dry branches, and the Lord comes to scorch in us this forbearance of transgression. Through the absolution of sins He is preparing a worthy dwelling place for Himself in us. —St. Theophan the Recluse Thursday in the First Week of Great Lent
St. Ignatius (Brianchaninov), Archimandrite Lazar (Abashidze)
Often the mind does not remember a sin committed, or may hardly recognize it as a sin. However, the soul remembers—it feels hell inside, it languishes and suffers, and the whole person is filled with a kind of melancholy, anxiety, and despondency. When Should Children Begin to Fast?
When the children grow and their personality and inclinations become clearer, parents should show tact with respect to the norms of fasting. They must not, for example, forbid them sweets against their will, or make the fast days so strict with regard to food quality and quantity as to exceed the norms of the Church’s rule of fasting. Ailing or frail children can naturally be given dispensations, or even be freed from fasting. Homily on Wednesday of the First Week of Great Lent. On the Danger of Hypocrisy
St. Ignatius (Brianchaninov)
Vainglory and its offspring, hypocrisy, are ruinous at their very root—they deprive a person of all heavenly reward, representing the vain human praise he has chosen and desired as the only reward. The Lord condemned vainglorious hypocrites.
Comments

Patrick3/14/2011 1:10 am
This is a great story about St Theodore. Keep up the good work and may God bless you. Your friend Patrick

Patrick Minshew3/14/2011 1:04 am
Thanks my friends in the lord Jesua. Thanks for the story of St Theodore. Its sad he had too go in a way like he did but most likely many others saw his faith and they were saved because of him. I was baptized in the Russian Orthodox church three years ago. May God bless you and keep up the good work your friend Patrick
×