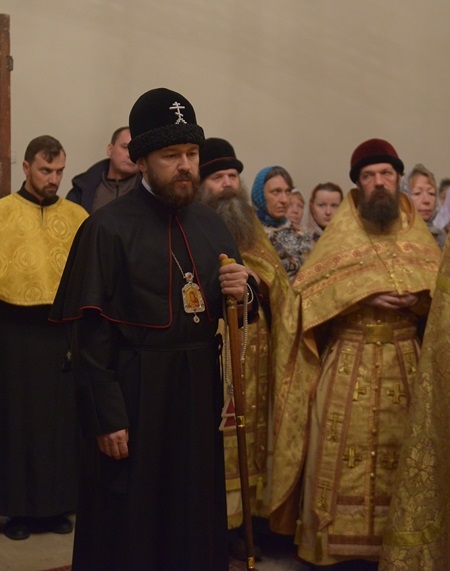 The Pan-Orthodox Council can only be legitimate if all local Churches without exceptions participate in it, the Moscow Patriarchate said.

"Some people now say that it's their problem that they have refused, they don't have to participate, but we will go ahead anyway in the composition that will be there and will make decisions and they will become binding for everyone. It doesn't happen that way," Metropolitan Hilarion, the head of the Synodal Department for External Church Relations, told a briefing in Moscow on Monday.

He said that all Churches have to participate in the Pan-Orthodox Council and "that is the only situation in which decisions made by this Council will be legitimate."

In a statement obtained by Interfax-Religion, the Synod of the Russian Church called for support of the proposal made by the Antioch, Georgian, Serbian and Bulgarian Churches, which have proposed to reschedule the Pan-Orthodox Council for a time to be established later following a general Orthodox debate and with the consent of the heads of all Orthodox Churches.

"Do everything to continue the efforts to strengthen the general Orthodox cooperation in the preparations for the future Holy and Grand Council, which is expected to become a true testimony of the unity of the Holy, Christian and Apostolic Church," the statement said.

The Synod called for the intensification of the work of the Pan-Orthodox secretariat on studying proposals on the solution of problem issues relating to the Council, the solution of differences and work on the necessary documents, and also said that all bishops of local Churches should participate in the Council. In course of preparations for Pan-Orthodox Council, most of Russian Orthodox Church’s proposals approved
For instance, the Council will take place not in Istanbul but in Orthodox Greece, on the island of Crete and the issue of the calendar, on which there is no consent, will not be considered at all.
Comments

Paok6/20/2016 5:28 am
Pete Skakevich's definition of hypocrite: "anyone who does not support gay marriage and homosexual bishops right to have boyfriends"

It's very easy for "men" with no standards and morals to call everyone that isn't like them hypocrites. You have to actually believe in something for you to be called a hypocrite. When your a spineless coward that follows the pack like Pete everyone who doesn't is a "hypocrite". How is obedience to Christ's Church and her canons hypocrisy?

Paok6/20/2016 5:22 am
Foma Rajtar? Sounds like a Muslim name to me. What in the world can you know about democracy? If you think that the dictatorship of a cowardly patriarch from Turkey imposing the will of his overlords by changing and manipulating over 2000 years of tradition so that only those who think like him and his lodge members have a chance to vote you are highly delusional. But then again maybe that is democracy according to your Muslim ancestors? Also, the Church is not a democracy, but the body of Christ who pleads for the Holy Spirit to lead, guide and direct His holy church. The leadership is supposed to be willing and obedient servents of their Master Christ. P. Bartholemew is a man with a very clear and unorthodox agenda. He has been planning and coercing his will on the local church's since the beginning of this process and now he has FAILED by the grace of God and yet he insists on moving forward because his overlords command him.

Pete Skakevich6/16/2016 7:34 pm
The Council goes on without the hypocritical leaders of the ROC.